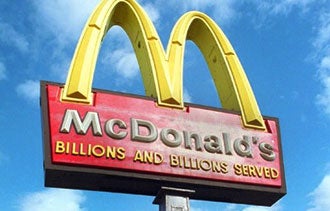 McDonald's is tapping social media to help introduce the human faces behind its vendors, notably farmers who supply the beef, lettuce and potatoes for those Big Macs and fries.

But social media being a two-way street, consumers have been talking back loudly -- and in some cases obscenely -- via the Twitterverse.

As part of its "Supplier Stories" campaign this month, the fast-food icon promoted the #meetthefarmers hashtag on Twitter, linking to YouTube videos that feature folks like cattle rancher Steve Foglesong of Black Gold Cattle Co. in Astoria, Ill.

In "Raising Cattle and a Family," a guitar plays softly as picturesque images of Foglesong are shown, such as the rancher on horseback, in cowboy hat, rounding up cows and later enjoying a McDonald's takeout lunch on the tailgate of a truck.

Similar videos feature fourth-generation farmer Dirk Giannini, who grows lettuce in California's Salinas Valley, and potato supplier Frank Martinez, owner of Saddle View Farms in Washington, who grew up the child of migrant farm workers. "If you make something with pride, people will taste it," he says.

Folks minced no words in response to the campaign.

"I AM SO ANGRY. Here's another [expletive] YOU to Mcdonalds for #greenwashing with the #MeetTheFarmers tag. Arg!" tweeted @eatLocalGrown, a website that promotes locally grown food.

"I'm a farmer, but don't and won't grow anything for @McDonald's," Greg Massa, an organic farmer in Hamilton City, Calif., tweeted under the handle @massaorganics.

Despite the testy tweets, McDonald's says the campaign has yielded mostly positive feedback. Although the franchise acknowledges some missteps.

For instance, the chain last week also promoted a #McDStories tag but withdrew it after a firestorm of ticked-off, embarrassing tweets, such as this one from Skip Sullivan, a contestant from NBC's "Love in the Wild" dating show: "One time I walked into McDonalds and I could smell Type 2 diabetes floating in the air and I threw up."

In a statement, Rick Wion, McDonald's USA social media director, said: "While #meetthefarmers was used for the majority of the day and successful in raising awareness of the Supplier Stories campaign, #mcdstories did not go as planned. We quickly pulled #mcdstories and it was promoted for less than two hours."

Wion added that the franchise always includes contingency plans in it social-media campaigns.

"The ability to change midstream helped this small blip from becoming something larger," he said. "As Twitter continues to evolve its platform and engagement opportunities, we're learning from our experiences."