Want to Wow Investors? Bring Your Kids to the Pitch Meeting

By Carol Tice February 23, 2012
Opinions expressed by Entrepreneur contributors are their own. 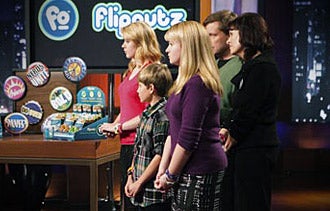 It's a great idea for entrepreneurs to take their kids to work. Never too soon to plant that seed and show kids you can be your own boss and shape your own financial destiny.

But would you take your kid to a pitch meeting with investors?

I ask because this seems to be a new mini-trend -- or at least it is if you're watching ABC's reality-TV show Shark Tank. And if the results are any evidence, other entrepreneurs might want to give some thought to bringing their children along, especially if the business involves children's products.

First, two weeks ago, inventor Shelly Ehler of Ladera Ranch, Calif., brought her two sons on the show to help demonstrate her product. The ShowNo is a towel/poncho that allows kids to easily change out of bathing suits in a public place while staying covered up.

It made sense in a way, because it gave her a couple of willing subjects to demonstrate the product. But as a mom, I was biting my nails.

Just ask movie producers -- kids are a total wild card. They could do anything in front of the cameras. And you know those producers would use it if something crazy or embarrassing happened, too. This could be your chance to get big funding and connect with a super-influential investor, going right down the toilet. If you can't control little Johnny, why should the investors trust you to control your company?

For Ehler, the risk paid off. The boys were troupers and she walked away with a $50,000 check from "QVC queen" Lori Greiner. Ehlers has already blogged that Greiner is the mentor she dreamed of finding.

Then, last week on Shark Tank, more kids. This time, it made sense to me. The business, M3 Girl Designs, started by 16-year-old Maddie Bradshaw when she was just 10. Her younger sister Margot is the company's vice president, and their mother Diane Bradshaw is the CEO. Maddie's Snap Cap jewelry -- interchangeable designs you display inside old bottle caps -- had grossed $5 million over the years, including $1.3 million in 2010. Margot recently introduced her own line for older girls.

Mom could have bearded for them on the show, but there was a cool factor to having these kidpreneurs present their own product. Ironically, it was one of the more mature businesses that have been presented on Shark Tank. These girls had real sales and distribution in more than 1,000 specialty stores.

The Sharks smelled the blood of a great opportunity in the water, and it was a feeding frenzy, with multiple offers flying around the room. Margot was unbelievably cool while these billionaires threw out offer after offer, trying to do each other out of the deal. In the end, they walked away with $300,000 for a 30 percent stake in the company in a joint offer from Greiner, Dallas Mavericks owner Mark Cuban and software mogul Robert Herjavec, leaving a disappointed Kevin O'Leary out in the cold.

In both cases, the kids brought a novelty factor to the negotiating table that -- combined with a strong business -- roped in the investors. Would it work out in the real world, or is this only for the TV cameras? I don't know. But entrepreneurs are getting younger and younger, so maybe we'll see more pitches with kids in the future.

Would you bring your kids to a pitch? Leave a comment and let us know.

Corrections & Amplifications: The CEO of M3 Girl Designs is Diane Bradshaw. Margot Bradshaw is the company's vice president. An earlier version of this story misstated their roles at the company.

How much does it cost to have a baby in Mexico?