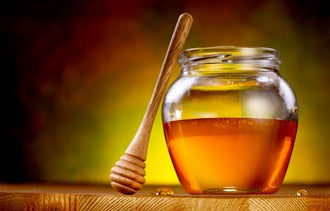 It all began with a favor. Back in 2004, a colleague of David Rzepka, whose family owns a commercial real estate business near Cleveland, Ohio, asked if he could keep a couple of beehives on David and his wife Amy's farm. They said sure.

A month later, the co-worker explained that his wife was having a difficult pregnancy and he was unable to tend the hives. The Rzepkas were on their own.

"We didn't know a thing about bees," says Amy, 47, who met husband David, 48, when they were students at Ohio State University. "All I knew was that they sting."

The couple began reading books, talking to local beekeepers and taking classes at the nearby university. They quickly got hooked on beekeeping. Especially David.

In 2005, after collecting the debut season's honey and beeswax, David began tinkering in the basement to create a lip balm. It took many attempts to get it right. "We didn't have any intention of selling it," says David. "We were just making the product for friends and family."

But when requests for the balm kept coming, they decided to start producing products for sale, launching the Beecology e-commerce site in 2007.

The line now offers 15 products, including soaps, body washes and creams, shampoo and, of course, lip balm -- all made from honey, beeswax and antioxidant-rich propolis, which bees produce from tree resin and use to seal hive openings.

The Rzepka hives have multiplied to 20. When the couple can't meet demand or they hit a crisis -- "last year, a bear got into the hives and destroyed half of them" -- David buys from local beekeepers. To stay up to speed on his chemistry and technical knowledge, David also taps the advice of a friend who manufactures car wash soap.

For all Beecology's success, every new product still begins with David tinkering in the basement. "It took 110 tries to get my lotion and cream right," he says. Currently, he's working on a foaming hand soap, which takes money as well as patience. "By the time you order bottles, labels, new equipment and raw ingredients, it takes $15,000 to $20,000 to develop a new product," he says. "I try to use best-quality ingredients and stay bee-centric, using the hive in the best possible way."

Those values also motivate the Rzepkas to give back. Beecology contributes 20 percent of net profits to several health care and environmental nonprofits. On a separate website, SweetYear.org, customers can actually choose which cause to support with their purchases.

Learning how to grow
Increasingly, Beecology is expanding from sideline to full-scale business, especially now that two of the couple's three kids are in college.

While David still manages some real estate business, Amy works full time on Beecology, spending some days fulfilling orders alongside two full-time employees in a facility behind the house. Mostly, however, she concentrates on sales and marketing. Like the products, sales required a huge learning curve.

"We didn't realize all the things you need to put out products," she says. "There's a ton of paperwork to fill out and you have to check on product categories and get UPC codes." She also had to learn how to pitch her product at meetings with national retailers. It seems to have worked. Beecology products now are sold in more than 20 states and Canada.

The fact that Beecology is a homegrown, sustainable company helped to open doors, according to David. "Some of the big retailers are really cool about buying local and helping small businesses in the area," he says, noting that the local Whole Foods and Earth Fare, which both sell Beecology products, have been particularly encouraging.

More recently, the couple tapped a national marketing representative firm to build awareness and boost sales. The rep sells Beecology products at trade shows, taking a percentage of sales, and promotes their products at events -- for example, creating gift baskets for celebrities.

Building a business road map
The Rzepkas are well aware, though, that they haven't been strategic planners. "It's led to mistakes," says David. "We tend to jump the gun. For instance, trying to get into retail places that won't work."

They repeat, like a mantra, the need to focus on one customer at a time. "We do what we have to do," explains David.

But that's not a business road map, argues Roger Jenkins, dean of the Farmer School of Business at Miami University in Ohio. "Every entrepreneur needs to build a business model that can both sustain a lifestyle and scale up," he says.

"You need to analyze customer wants and needs, figure out how to meet those needs and wants, what financial assets are required, and sometimes make tough choices to achieve that," says Jenkins, whose private-sector experience includes being chief executive officer of a management firm and chief operating officer of a $600 million retail clothing operation. In short, says Jenkins, you need a business plan. Otherwise, "you don't know what you don't know and you'll end up squandering resources."

Would a plan fuel bigger business for Beecology? Probably. But you sense the Rzepkas think a plan would kill the fun: "I'm a tinkerer, not an industry researcher," says David. "We jumped in because we love it." And from Amy's point of view: "We keep doing it because people enjoy the products. It makes me proud."