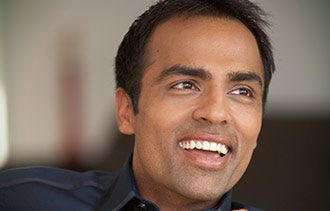 Solving big problems is what drives the most successful entrepreneurs. While other people sit on the sidelines, entrepreneurs are quick to tackle an issue they are passionate about -- whether it's business or personal. Gurbaksh Chahal is the latest to take on one of the biggest challenges with a bold move.

The multimillionaire is launching what he hopes will become a humanitarian movement that stretches far beyond business. Chahal has committed $1 million to launch the BeProud foundation as part of a broad effort to prevent hate crimes and empower people to embrace their differences.

"As Americans we're a melting pot," he says. "Everybody's different, and we should be proud of that."

His decision to start a foundation came after the Wisconsin Sikh temple shooting earlier this month, when a white supremacist gunned down six people and wounded four others. "I had a sick feeling in my stomach when I heard the news," says Chahal, who emigrated from India to the U.S. at age 4 and was incessantly teased for wearing a "patka" to school, a traditional head covering for Sikh children. He still vividly recalls the years of bullying he endured just for being different. Now 30, he was taken aback when he saw the same hate attacks still persist today.

"It's supposed to get better, not go backwards. We should be coming together," he says. "Somebody needed to step up. I knew it was up to me to take the lead on this change and create a message we can all come together on."

The BeProud foundation is expected to officially launch with a TV and social media campaign, including Facebook and Twitter (@BeProud), next month. Through the foundation's website, individuals will be able to make donations, and Chahal says 100 percent will be used to support families of hate crime victims. In the future, he expects to introduce other ways for people to get involved, including off-line events. Even in its early stages, the initiative appears to be gaining traction quickly.

"We started receiving hundreds of emails all over the world from people who wanted to volunteer right away," says Chahal, noting it has also attracted the support of Deepak Chopra, musician Jay Sean, actress Lisa Ray, and film director Gurinder Chadha, among others. He is hoping the entrepreneurial community will also come together to help build momentum.

He says he is determined to bring about change. To be sure, Chahal is known for his persistence and determination in business. At 18, he sold his first online advertising startup ClickAgents within two years for $40 million, cashed out his second company BlueLithium for $300 million, and currently runs his third venture, RadiumOne. His success has afforded him the opportunity to give back in a big way.

"It humbles you and keeps you grounded, reminding you of the opportunities you have that you are grateful for," Chahal says. "I'm also a big believer in karma, and you want to make sure you spread enough good in this world."