3 Things to Consider About Swearing at Work

By Gwen Moran September 27, 2012
Opinions expressed by Entrepreneur contributors are their own. 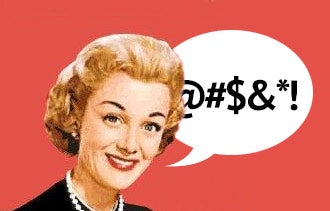 People may have different opinions about whether it's a good idea, but colorful language is a fact of life in many offices. While a July 2012 survey by CareerBuilder found that bosses might be less likely to promote employees who swear, more than half of respondents said they do it anyway. And a UK study published earlier this year found that swearing in the workplace actually builds camaraderie.

Related: 5 Tips and Tools to Create a Company Culture When You Run a Virtual Business

Whether your workplace culture is a let-‘em-fly zone or a place where cursing is frowned upon, there are a few things to keep in mind.

1. Be upfront about your workplace culture. It might seem silly to state the obvious --"We drop a few f-bombs around here," or "We avoid swearing in this office," -- but Jay says it's a good idea to let people know that cultural quirk even in the interview phase. That way, new employees know what to expect and aren't shocked by others' language or embarrassed if they swear when that's not the norm.

And once you've decided on the type of environment you want to create, model the behavior that you want to see. If you run around the office swearing a blue streak, your employees are likely to do the same.

Related: When a Tattoo Equals a Lawsuit

2. Respect others' feelings. Employees may have different feelings about cussing depending on age, gender, religion, and other factors. One person might think saying "that sucks" is vulgar while another would consider it pretty tame.

Of course you know that there's a big difference between letting an expletive slip when you've jammed your hand in the desk drawer and telling an employee he's "a f-ing idiot." But aside from avoiding swear words to insult or intimidate, you need to make sure your employees feel comfortable in your company culture at large. Encourage others to avoid salty language around those who find it offensive, and remind everyone to refrain from swearing in front of customers or vendors, especially if you don't know their feelings about such language.

3. Consider context. If you just aren't comfortable with colorful language in your workplace, that's fine. After all, you're the boss. However, if an employee does let an off-color word fly during a moment of anger or stress, it's best not to make a big deal about it, says Jay. After all we are all adults.