By Kristin Luna June 28, 2013
Opinions expressed by Entrepreneur contributors are their own.

Members of the millennial generation often say they want to make the world a better place through social entrepreneurship. Jeff Steitz and Ryan Westberg just made the leap earlier than most.

Before meeting in college, both men grew up in entrepreneurial households. But Westberg, 22, credits a study abroad program called Semester at Sea with ultimately inspiring the pair. Their brainchild: Serengetee, a line of T-shirts and tank tops with bold pockets that are symbolic of the nation from which they source their fabric. The young entrepreneurs then give 13 percent of their proceeds back to those source countries to support worthy causes.

During the four-month Semester at Sea program in 2011, which was sponsored by the University of Virginia, students take classes on a ship dubbed the MV Explorer for college credit. They also stop at a dozen ports from India to Morocco -- taking in the sights and sounds along the way. Steitz and Westberg, along with a few friends, began to collect fabric in each port -- amassing a stockpile that exceeded 50 yards over the semester.

Related: Do We Really Need an Alternative Form of Capitalism?

"One day, we were sitting in our cabin with all the fabric laid out in front of us. We looked over at the map and suddenly realized the potential these fabrics had to connect the world," Westberg, Serengetee's marketing director, recalls. From there, he adds, that's when the whole concept came together: the fabrics, the pocket T-shirts and, of course, the mission. "We launched Serengetee.com, determined to build a brand that would make real change in communities around the globe," says Westerberg.

Last January, when Steitz and Westberg returned to their home universities -- Claremont McKenna College and University of Arizona, respectively -- they engaged notable ‘treps to mentor their efforts. Among others, they tapped Adam Braun, the founder of Pencils of Promise, a New York City-based nonprofit that builds schools around the world.

"The Serengetee team had a very clear vision for the type of company they wanted to build," says Braun, who met the future founders as he guest lectured aboard the MV Explorer. "Hopefully sharing my story helped inspire them that regardless of age, status or location, you can start a company that leaves a positive impact on the lives of others."

Since its launch over a year ago, Serengetee, which is based in Claremont, Calif., has built a following through a digital media and word of mouth. The company's Facebook page has more than 30,000 fans, and 130 campus-based reps across the U.S. promote the line at 110 universities.

"They have a unique product that really stands out and enables each person to display their personality while sharing the story of the brand," Braun says. "The key to many successful companies is that they turn consumers into ambassadors, which is what Serengetee is able to do with the look and feel of their clothes." 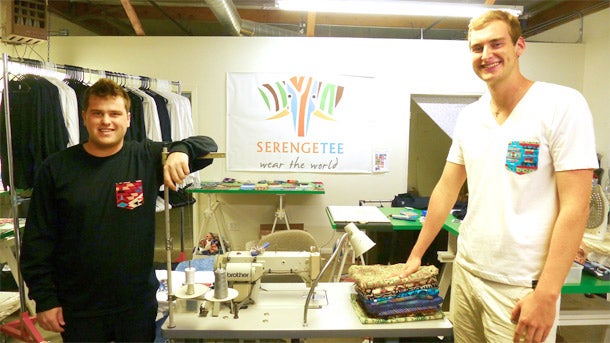 Jeff Steitz (on left) and Ryan Westberg in Serengetee's warehouse in Claremont, Calif.

The team has continued to travel to far-flung locales -- from Ghana to Vietnam --sifting through markets to find textiles for their next styles. Each fabric must satisfy Serengetee's rules: bold, machine washable, and easily identified with the place of origin in color, look and pattern.

Then, through careful deliberation, the now five-person team decides which local charity to support. "Oftentimes, the biggest problem areas in one country are not the same as the country next door, so we attempt to tailor our partnerships to the country's needs," Westberg says. Supported causes include poverty relief in the slums of Chile and efforts to encourage healthy lifestyles among Madagascar's youth.

Serengetee is always creating new styles to align with causes close to the company. For example, in the wake of the Boston Marathon bombings, the team launched a limited edition run of four leaf clover-themed Tees to benefit The One Fund.

Being a bootstrapped venture founded by, as Westberg puts it, "broke college students coming off of a year of traveling"worked in Serengetee's favor. The creators scraped together $3,000 of their own money to get the project off the ground in early 2012.

In its first year, the company brought in $160,000 in revenue, primarily through online sales. Revenue projections for 2013 exceed $250,000, as Serengetee expands its product lines and increases its customer base. Further, Steitz says the company gave $5,000 to charities last year and aims to donate $25,000 by this year's end.

After graduating in May,Serengetee's founders are off on another round-the-world adventure -- starting in Central America and then working their way around the globe through Asia, Africa and Europe, ending in Brazil for the World Cup. Their ultimate goal is to source 100 fabrics from 100 countries.

"We decided to start Serengetee as a result of traveling and are intent on making travel a big part of who we are as an organization," Westberg says. "We want to truly live our mantra of connecting people to the globe through fabric."

How did a study abroad experience inspire your entrepreneurial ambitions? Let us know with a comment.