Brand Shop 'Taps' Into Its Expertise to Build Brewery

By Sarah Max September 13, 2013
Opinions expressed by Entrepreneur contributors are their own.

When the Bend, Ore.-based creative branding shop TBD quietly started talking about building its own craft brewery about five years ago, the idea sounded a little farfetched. The agency, which opened in 1997 and works with a range of industries, was an ace in brand development, advertising and design.

But what did it know about beer?

Turns out, it knew quite a bit. For years, TBD (short for "to be determined") had worked behind the scenes with a handful of brewery clients on everything from fine-tuning business plans to inventing new ideas for packaging. It understood the beer world, and could see that consumers were developing more sophisticated beer palates. "We saw where the industry was heading, and it seemed to be toward higher-end beer brewed in smaller batches," says Paul Evers, TBD's president and chief creative director.

At the same time, Evers and the TBD team found themselves in the same predicament as many other agencies: Media placement fees, a key source of recurring revenue, have been shrinking, forcing shops to expand their offerings. Granted, most agencies aren't starting breweries. But TBD viewed the unusual idea as the perfect way to diversify its business, while showcasing its ability to a brand from the ground up.

The concept began taking shape when TBD connected with two brew-industry veterans, brewer Larry Sidor and sales-and-distribution expert Dave Wilson. "[We] started getting together and talking and what would be our dream brewery and found there was a lot of synergy there," says Evers. 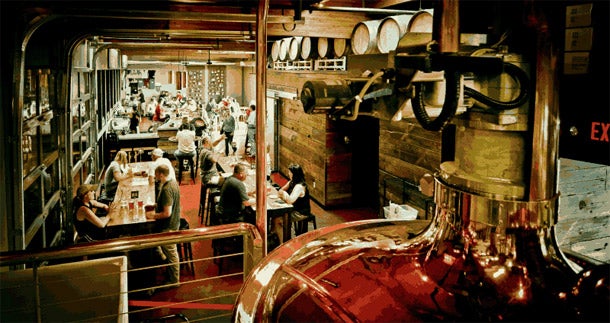 They inked a partnership, defined their roles and started pitching investors – just in time for the financial crisis. "It was about to be funded, and all of a sudden it wasn't," says Evers. While the recession put their plans on hold, it also gave credence to their idea. "The craft segment was seeing 10% to 20% growth, and that was during a recession," says Evers, adding that the increase was even more pronounced for the so-called super-craft beers they planned to make.

The group used the economic downturn to fine-tune their business model, and by early 2011 had assembled a group of investors and began turning their big idea into a grass-roots reality.

Early on, the TBD crew recognized a potential roadblock. It wasn't TBD's brewery clients; despite the potential for conflict of interest, craft brewers are a collegial group and supported the endeavor, Evers says. Rather, the very thing that gave them an edge – their expertise in branding and messaging – could also work against them. "The craft segment is driven by the idea that beer sells because it tastes good, not because of gratuitous advertising," says Evers. "We didn't want our motivations to be misinterpreted."

In addition to staying true to the craft beer tradition, the group made sure everything about their brewery – which they called the "yet to be named brewery" until just before its debut – came across as authentic, not corporate. Some of this was by design, says Evers, but it was also out of necessity. They were, after all, a startup working with limited funds.

The Lesson Learned
Normally, launching a venture that strays this far from a company's core offering would be the kiss of death. "But in this case I think it makes a lot of sense," says Kelly Goldsmith, an assistant professor of marketing at Northwestern University's Kellogg School of Management. Not only did the agency have a history helping other brewers get their brands off the ground, it recognized that it needed to team up with industry experts and address the issue of authenticity. At the end of the day, "it's a calculated risk," she says. "It's not like they're switching gears completely." Moreover, she agrees that there's real value in a creative firm building a company from the ground up. "There's lots of ways they can win here," she says.

They found a space for their brewery and tasting room in an out-of-the way industrial area on the fringe of Bend's downtown. The price was right, and it proved an ideal spot, with mountain views and ample outdoor space. It was also at a crossroads, physically and philosophically, of this former mill town and just the inspiration they needed to name their brewery, which they christened the Crux Fermentation Project.

They bought most of their equipment used – including a brewhouse that was built for the Nagano Olympics, disassembled, and shipped to Oregon for Sidor to reassemble. They outfitted their tasting room with reclaimed wood and objects salvaged from a scrap metal yard. Even the coasters are a reincarnation, cut out of corrugated cardboard and hand stamp with their logo. Everything ties back to the ethos of craft brewing. "It's a heighted interaction between science and creativity," says Evers.

Whether it's the beer, the location, or the upcycled accoutrements, it's working. Crux passed its break-even point in the first year– impressive considering the high start-up costs – and traffic in the tasting room has more than surpassed the owners' expectations. Crux is on track to produce 1,500 barrels this year.

Back at the agency, the project has given TBD a whole new perspective on the challenges its clients face and paved the way for it to trade its services for equity stakes in new brands outside of brewing. "We have clients coming to us saying the main attraction is we helped build this brand from the ground up," says Evers.