Teen Inventor Asks the Question 'Wouldn't It Be Cool If...'

By Susan Johnston June 25, 2012
Opinions expressed by Entrepreneur contributors are their own.

This summer, while many of his peers are flipping burgers and relaxing on the beach,  McCluskey of Indian Trail, N.C., will be considering distribution channels and preparing to meet with potential investors. He'll also get the chance to work with one of the top innovation firms in the country Fahrenheit 212, which was co-founded by a Geoff Vuleta, the former worldwide board director at Saatchi & Saatchi.

In April, the teenage inventor beat out more than 1,100 10-to-15-year-olds to win the first-ever " Wouldn't It Be Cool If " contest with his idea for Baby Safe Rider, a product that would identify spikes in a baby's temperature and reduce the mortality rate of babies left in overheated cars. The contest is a joint effort between Time Warner Cable's philanthropic initiative Connect a Million Minds and musician will.i.am's i.am.FIRST, which is an effort to promote science, technology, engineering and math, or STEM, education among young people.

As his prize, McCluskey will -- over the next several months -- head to the New York offices of Fahrenheit 212 to work on bringing his idea to market. Through Skype and in-person meetings, a dedicated team at Fahrenheit 212 will help the high-school student through a product-development process similar to the one they use with Fortune 500 clients. 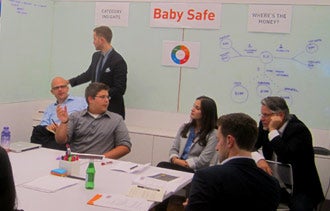 Greyson McCluskey (grey shirt, center) is speaking to "his team" from Fahrenheit 212 about his big idea.

The process
"First we'll sit together and define what success looks like," says Mark Payne, president and head of Idea Development for Fahrenheit 212. Then, he says, the team will analyze the potential commercial avenues for the product. "Do we want to be in the child seat business? Or are we looking to create accessories that would incorporate this functionality?" Payne says all ideas are on the table, including potentially teaming up with automotive companies or licensing the concept to an existing company.

For his kickoff meeting at Fahrenheit 212's last week, McCluskey says each room was set up to explore a different question about his idea. "My team," he says, before stopping to acknowledge just how cool that is to say. "It was amazing the way they worked," he adds. "There was a lot of collaboration. Everyone was talking. It was fun and interactive."

The second room -- his favorite -- allowed him to brainstorm free from financial constraints. "That one wasn't as realistic, but we weren't worried about financial ideas so it was more fun," he explains. McCluskey says he's already familiar with some of the concepts mentioned later, including profit margins and cutting out of the middleman, from his high school economics class. "From now on, we'll be working with more details, focusing on sparking the interest of investors and people that want to get involved with this," he adds.

The way forward
McCluskey's vision and maturity have already made an impression on his team. "When asked if his invention could potentially cause moms to think it's safe to leave their kids in a car he responded with 'people don't drive more recklessly because they have airbags in cars,'" says Alex Bertha, an Innovation Consultant at Fahrenheit 212. "It was a brilliant point well made."

According to Vuleta, Fahrenheit 212's CEO, the firm has no financial interest in the finished product and is offering its services on a pro-bono basis to help spur interest in STEM education among young people. "The reason we got excited about the contest is we are an entrepreneurial business ourselves with a big belief that a certain approach can change the predictability of innovation," says Vuleta. "Driving the excitement level and the cool factor [around innovation] can only be a good thing."

Before the contest, McCluskey planned to become an architect but says the experience has inspired him to consider working at a firm like Fahrenheit 212 someday. "This has given me so many different opportunities, like being the Grand Marshall for my Fourth of July parade and going to a council meeting with the mayor of my town," he says.

According to Payne, "the value of what comes out of it will not just be the value around Greyson's idea, which is tremendously powerful, but the inspiration it will give to thousands and thousands of young kids who will get excited about big ideas and seeing them through. I think it's going to be a fascinating journey to watch unfold."

What do you think will most effectively encourage STEM education among young people? Leave a comment and let us know.