Rebooting an App to Boost Profits

By Chris Newmarker December 10, 2013
Opinions expressed by Entrepreneur contributors are their own.

Naman Singhal enjoyed success with his company's Roulette Mobile app for iPhone and iPad. But the 27-year-old Indian entrepreneur had been going bust on the follow-up app -- Blackjack Multiplayer.

While Roulette Mobile saw 400,000 downloads since its May 2012 debut, Blackjack Multiplayer had only a fifth as many since its own launch later that same year. And though dozens of Roulette Mobile fans play each other daily, only a few people log onto Apple's Game Center each day to play Blackjack Multiplayer. "We expected it would do much better," Singhal acknowledges.

Additionally, Roulette Mobile's fans purchase "chips" to continue playing, turning the app into a major money-maker for iAppStreet, the New Delhi-area company Singhal started in 2010. The company presently has a total of eight employees and near $200,000 in annual sales, with much of the revenue coming from roulette.

Singhal wants Blackjack Multiplayer to become a similar money-maker for the company. That's where Entrepreneur Media and Adaptive Media's TrepLabs come in, advising Singhal and his team on the creation of a soon-to-be-released Blackjack Multiplayer update with enhanced features to make the app more attractive to prospective downloaders.

He feels the market for Blackjack Multiplayer lies with people who want to brush up on their blackjack playing skills before playing at a real casino. "It's more about learning and having fun," Singhal said of the app.

The app includes single player or multiplayer gameplay and can be played using a local Bluetooth connection. There are options for playing blackjack American or European style, with two, four, six or eight decks. "It is a simple, no nonsense type of thing," Singhal said of the app's design.

Challenges: Just finding the app can be hard, since a simple search for "blackjack" on the iTunes store turns out nearly a half a dozen similar apps.
"You cannot do much about it," Singhal said. 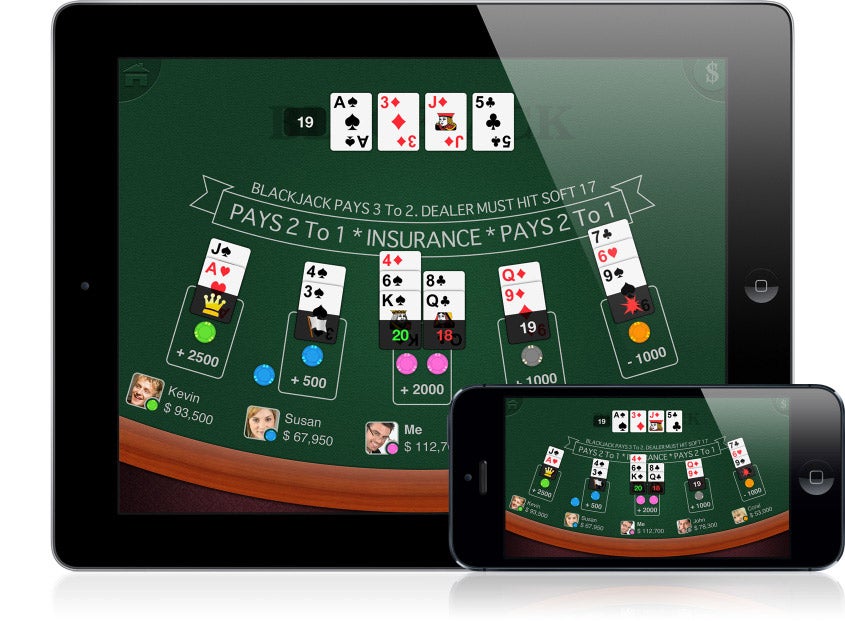 An update to Blackjack Multiplayer will make gameplay more intuitive for those who download the app.
Image credit: iAppStreet

To sidestep search issues, the updated app will have much more obvious "tell a friend" functions to help spread the word about the game. Eventually, Singhal would like players to be able to actually get their friends together around a virtual blackjack table, versus playing with anonymous competitors at the Game Center.

With feedback from TrepLabs, iAppStreet has focused on increasing ease of use in gameplay, making playing commands more self-explanatory.

The app's latest version, to be released this month, includes a variety of sounds to enhance user experience with "acknowledgement or celebration" over wins, Singhal said.

The new Blackjack Multiplayer also restores some game-playing functionality lost after the release of iOS 7. Singhal and his colleagues are focusing on the iTunes store for now, with plans for Android's Google Play store next.

Strengths: Singhal is a proven risk taker. After getting his first iPhone in 2008, he left his job as a software engineer at a search engine marketing company to strike out on his own. "I was completely blown away by it," Singhal said of his first iPhone. "I knew I had to do something with it because it was going to be the future."

Singhal worked for a year out of his parents' house and eventually turned iAppStreet into a revenue-generating app development company with its own offices and employees.

In addition to rebooting Blackjack Multiplayer, iAppStreet is finalizing updates to its other casino game apps. The company is also diversifying by updating photo-related apps they've released in the past such as Photo Wall, Cam X and Insta Booth.

Singhal credits TrepLabs with providing needed advice -- feedback that is hard to come by in India, a nation with plenty of tech know-how but not the incubators and support programs for young companies more common in the United States.

"We have come so far on a shoestring budget," Singhal said "All of the apps will be super awesome."

Blackjack Multiplayer is available for download in iTunes for the iPhone and iPad. The app will continue to get updates with new features but the developer is looking for your feedback on their page at TrepLabs.com.