Microsoft chairman and eminent philanthropist Bill Gates is moonlighting as a Secret Santa.

The billionaire, it turns out, participated in Reddit's Secret Santa program--an annual initiative established five years ago in which tens of thousands of strangers worldwide exchange gifts for the holidays via the online social community.

One lucky Reddit user, Rachel, was stunned to unwrap a stuffed cow, a National Geographic travel book, and a card indicating that the donation of an actual cow had been made on her behalf to Heifer International, a global nonprofit that contributes livestock to communities in need. A greeting card was signed simply, "Bill Gates." 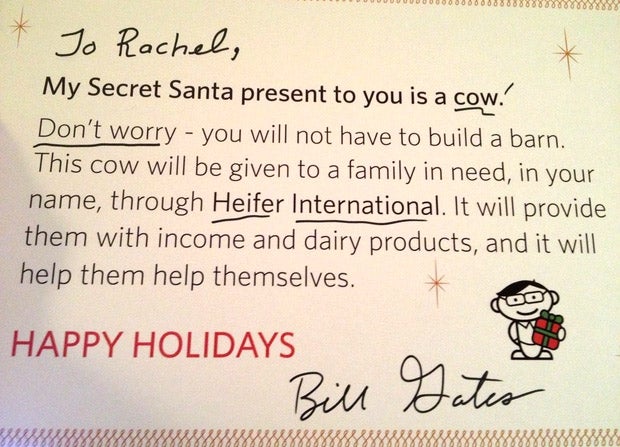 Related: Reddit Founder on Startup Success: Identify a Genuine Need and Fill It

According to Heifer International's website, the donation of one cow amounts to a hefty $500.00. Heifers not only provide nourishment to hungry families but boost income through milk sales and encourage better crop yields by creating fertilizer, the organization said.

Rachel's reaction to her gift? Over the moon.

"Bill- you ROCK (can I call you Bill?! I feel like we're friends now!)," she posted in response on Reddit, alongside images of her package, as well as a shot of Gates smirking and showcasing her wares. "Sorry for the apple ipad on my wishlist," she added, "that was really awkward."

The Reddit community was similarly awed by Gates' gift, with responses ranging from "That's awesome!!!" to "Pretty dope!" according to the user ir0c. "I definitely expected him to send someone an xBox One, though."