The Pivot That Transformed a Company -- and Your Next Repair Claim

By Laura Entis April 25, 2014
Opinions expressed by Entrepreneur contributors are their own.

Sometimes eighty percent of success really is showing up, even if that means showing up every day at an office where you no longer work. That simple step – and some old fashioned persistence – eventually led to $10 million in series B funding for one company looking to shake up the tired insurance industry.

But things weren’t always so sunny for Brad Weisberg, that firm’s founder. Back in 2011, he’d lost a job he loved when the travel booking startup he was working at, WhereI'veBeen.com, was acquired by TripAdvisor.

Although his job was gone, his keycard still worked. So for three months after he was let go, he showed up at his former office, a co-working space that also housed the early stage investment firm Lightbank. "I'd work out of the kitchen without anyone realizing I wasn't supposed to be there," Weisberg remembers. He began seeking out and befriending Lightbank analysts; outgoing and likeable, they taught Weisberg tips for pitching investors.

Because while Weisberg no longer had a job, he did have an idea. Three years earlier, he'd gotten a fender bender; taking his car into the body shop for an estimate "was frustrating and time consuming," Weisberg says. "I thought, why can't I use a 10 megapixal camera and take photos of the damage from different angles and use those to get an estimate?" Turns out, he could. "I called 100 shops and sent them photos, and I was able to get the exact same estimates."

After running it by his new analyst friends, Weisberg decided to take the entrepreneurial plunge. "I took out my life savings to have an iPhone app and a website made," he says, a move which scored him a meeting and $250,000 from Lightbank founders Brad Keywell and Eric Lefkofsky (co-founders of Groupon). 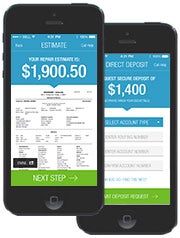 Snapsheet in use.
Image credit: Snapsheet

Momentum grew from there. Weisberg brought on recent MBA graduate CJ Pryzbyl as a co-founder and together the duo raised an additional $1 million for the company then called BodyShopBids.

But while BodyShopBids was getting a lot of positive feedback, it wasn’t getting a lot of actual business. Most body repair bids go directly through insurance companies and it was hard to draw repeat customers. Meanwhile, the company was pouring money into advertising, splurging on a Super Bowl commercial ("When one of our board members saw it, he said he almost spit out his beer," Pryzbyl recalls). After three months of heavy marketing, dwindling cash and zero growth, Weisberg and Pryzbyl realized they needed to make a change.

Enter Snapsheet. Since the majority of auto claims flowed through insurance carriers, why not sell directly to them? The duo began attending every body shop and auto insurance conference they could, finally wrangling a meeting with the chief claims officer of Farmer’s Insurance, who told them on the spot that he wanted a prototype within four months. Since then, Snapsheet has signed with seven other big name carriers, including National General, MetLife and USAA and is currently on pace to process 50,000 claims a year.

The pivot – from B2C to B2B – was the key. “About 20 million claims a year go through insurance companies, so they are doing a lot of body work,” Pryzbyl says. With the Snapsheet app, claimants can take a picture of damage on their phone, send it to Snapsheet’s appraisers, and receive a direct deposit for their insurance carrier (Snapsheet receives a flat fee from the insurance agency every time it writes an estimate). Not only does the process eliminate hassle on the drivers’ side – a big deal, since most customers switch carriers after a bad claims experience – but it also reduces costs by 50 percent, Weisberg estimates.

Thanks to new technologies, the auto insurance industry is primed for a radical facelift, says Thilo Koslowski, a senior analyst and vice president of the automotive practice at Gartner Inc. “We’ll start to see auto-claims assessed using video and other sensor inputs to look at damages on the vehicle,” he predicts.

In general, the auto insurance industry is old-fashioned and cumbersome, and slow to embrace new and more seamless practices. That's a huge boon for a service like Snapsheet, which benefits from the industry’s distaste for change; it's easier for big carriers to partner with a technologically savvy middleman than update protocol internally. And the auto insurance industry provides a big enough market for a company like Snapsheet to maintain solid growth -- there may be a limited number of carriers, but “it’s the market size that really matters,” Koslowski explains, “and there are 230 million vehicles in use in the United States.”

Eventually, though, even the slowest industries update their practices, creating their own in-house technological solutions. When this happens, Koslowski says, Snapsheet may need to pivot again in order to stay ahead of the curve. “Once the industry understands how to leverage a certain technology, then you have to explore another area where it hasn't moved forward. It’s always a race for chasing the next innovation that core companies within these industries haven't even thought of yet.”

So what's next? Koslowski is full of predictions. One day, he says, carriers may charge customers on a ‘pay-as-you-drive’ model, which means they will "measure when you are driving, how far you are driving and look at the actual mileage to determine your risk factors.” After that, the next step would be the ‘pay-how-you-drive’ model, where insurers "measure how fast you accelerate, how much you are breaking and so on.” Ultimately, you'll be able to pay for insurance based on how many miles you drive and how safely you do it. The entire auto insurance industry, he predicts, could one day base its estimates on real time information, which will force insurance providers to rethink their entire business model.

Which, of course, leaves the door wide open for more disruption from companies like Snapsheet.