Which Company Led the Way for Tech Acquisitions in 2013?

By Laura Entis May 8, 2014
Opinions expressed by Entrepreneur contributors are their own.

Yahoo's been dropping it like it's hot. The company acquired 22 private U.S. tech companies last year, according to data from financial-research firm PrivCo. Most of Yahoo's purchases -- including its $1.1 billion acquisition of Tumblr -- have focused on aggressively launching the company into the mobile game.

"Last year was the year we began to make investment in mobile," company CEO Marissa Mayer said yesterday at the TechCrunch Disrupt conference. "We're late. We're behind," she admitted.

The Sunnyvale, Calif-based company's acquiring-happy approach marks a dramatic change from 2012, when it wasn't even among the top 50 acquirers, according to data from PrivCo.

But it seems like this year could result in another spending spree for Mayer. Yahoo is expected to get a major cash infusion thanks to Alibaba's pending IPO, in which Yahoo has a 22.6 percent stake and is required to sell 40 percent of its investment. It's speculated the company will benefit from a windfall of more than $10 billion, which would double its cash stockpile. Besides possible acquisitions, Yahoo is continuing to focus on its video strategy by bringing big-name journalists like Katie Couric to anchor shows and launching two original comedy series Other Space and Sin City Saints. The company has also partnered with Live Nations and in July will be posting one concert live every day for a year.

Rounding out the top 10 list were the usual suspects. Google came in right behind Yahoo with 19 acquisitions (many of them robotics companies), while Facebook, Apple and Twitter filed in at four, five and seven, respectively. (Check out our fast facts on Apple and Twitter's acquisitions).

Take a look at the full list of 2013's top 10 acquirers of private U.S. tech companies. 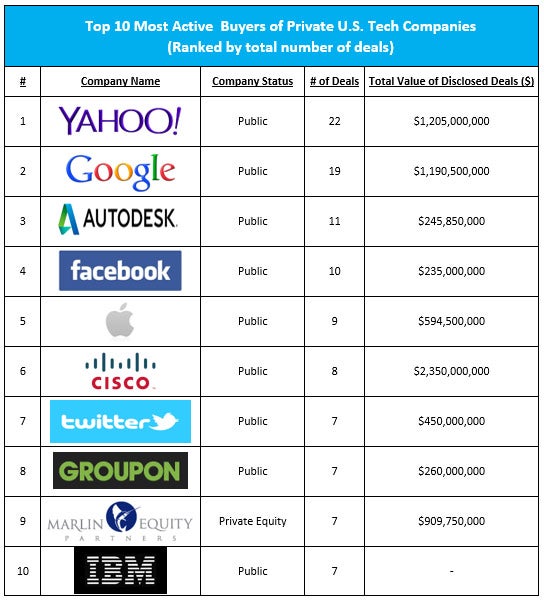 No Big Startup Idea? No Problem. Here's How to Buy a Business.