Wish You Could See the World Through an Instagram Filter? Now You Can.

Laura Entis
May 8, 2014 4 min read
Opinions expressed by Entrepreneur contributors are their own.

Instagram's central appeal lies in its filters which, depending on the one you choose, can magically render an otherwise generic image of your breakfast artistic, nostalgic or cheerful.

Ever think it's kind of a bummer that this effect is constrained to just Instagram? Or daydream about living in a world enhanced with sepia toned warmth? If you answered 'yes' to either question, Tens thinks it has a product for you.

Today, the Edinburgh-based brand launched an Indiegogo campaign for its sunglasses, which provide "a real photo filter" (essentially, they allow you to view the world through an Instagram-like tinge).

You may think, "Isn't this exactly the same as those variety yellow-tinted shades already on the market?" Tens co-founder Marty Bell would argue no.

"We focused predominantly on the way the bright sunlight was filtered -- paying close attention to filling highlight colors with subtle [yellows and oranges], adding saturation in the green and blues, particularly the sky tone," Bell explained to The Creators Project. "In unison this coloring boosts the saturation of what the wearer sees while blocking out harmful rays."

It's easy to mock the project, as it's dripping with a millennial-specific preciousness. (Tens promotional video runs like an advertisement for hipsterdom.) But as of this writing, Tens has already raised over £28,800, more than tripling its £9,400 goal. Clearly, it's struck a chord.

Tom Welsh, one of the project's creators, says his main goal is to make wearers happy by "taking what's in front of us and making it look the best it can possibly look." He came up with the idea three years ago. A professional photographer, Welsh was constantly taking pictures of friends and then color-correcting them, saturating blues and greens while amping up warmer tones to produce a friendlier, more aesthetically pleasing finish.

Wouldn't it be cool, he thought, if the world looked like the one in all his photographs?

Instagram wasn't yet the cultural phenomenon it is today, and Welsh insists Tens wasn't created with the photo-sharing platform in mind. That said, it hasn't hurt Tens to have a powerhouse company associated with its product.

Thanks primarily to the photo-sharing network, an entire generation has embraced the filter. Explaining the concept behind Tens sunglasses to older folk, Welsh finds, is often a struggle while those his age and younger instantly get it. 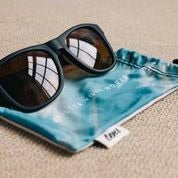 Related: This New Service Will Print Your Digital Photos for Free -- With a Catch

Now that the campaign has already reached its crowdfunding goal, Welsh says the plan is to expand the number of available frames. Down the line, Tens may create additional filters, but for now, the company is putting all its eggs in one sepia-tinged basket. "For us, the most important thing is the emotional experience," Welsh says. "It's not just the warmth of the lens, it's the saturation of the tones. Our sunglasses make you feel warm inside; they heighten your senses a little bit."

But what if wearers get too attached to seeing a world that's warmer, more vibrant than reality? "You can keep them on as much as possible," Welsh says.
Besides looking cool, the sunglasses are also quite durable. The lens consists of UV400 protection, blocking all harmful rays, and are scratch resistant.
Filter-happy folks can preorder a pair of Tens now for a minimum Indiegogo pledge of £36 (about $61) with free shipping anywhere in the world.
Related: 3 Cool Ways to Print Your Instagram Photos

3 Female Entrepreneurs Tell Us How They Use Instagram to Sell

Can Instagram Use Your Cell Phone Camera to Monitor Your Reactions? This Is What the App's Policies Say

Good End: How to sell more from your Instagram