This Is Google's Achilles' Heel -- And Startups are Targeting It


In the world of Internet startups, taking on Google's main business has been a fool's errand. The graveyard of failed search engines is long and deep, and while there are still challengers promising safer or more relevant results, Google's market share only goes in one direction: up.

But when it comes to mobile, the market is playing out very differently. At least that's the wager that youthful companies such as URX, Deeplink and Branch Metrics are making. They're all operating with a fairly simple thesis: search on mobile is kind of lame. Consumers on the move don't go to Google.com to type in queries, but instead open travel, shopping, music and news apps to find what they want.

Mobile users in the U.S. spend 86 percent of their time in apps and only 14 percent on the Web, according to mobile analytics company Flurry (now owned by Yahoo).

"The way that people find information on the phone is totally different," saidJohn Milinovich, the co-founder and chief executive officer of URX, a 20-person company in San Francisco. "There are 30 different jumping-off points."

Connecting that disparate universe of starting points and destinations is Milinovich's mission, because he knows that advertisers follow eyeballs. And the forecasts for mobile advertising are rather enticing. EMarketerpredicts the market will more than triple by 2018 to $108.8 billion from $32.7 billion this year.

Google will surely be a major force. The Mountain View, California-based company owns the Android operating system and a host of popular apps such as Maps, YouTube and Gmail. In Maps, Google recently added the ability to order an Uber after typing in a desired location. According to EMarketer, Google will control half the mobile ad market this year.

But on the many thousands of non-Google apps, there's a land grab underway. Traditional banner ads are limited by the smaller screens, while videos are intrusive and time-consuming to watch. For URX, Deeplink and Branch Metrics, the potential gold mine is what's called deep linking, or embedding links within apps in a highly relevant and personalized way, letting consumers navigate between their favorite apps and make transactions quickly and smoothly. The bet is that there's plenty of money to be made facilitating those sorts of deals. 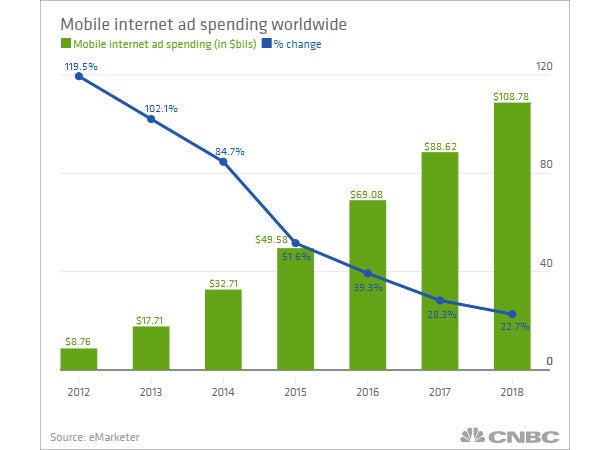 For example, while looking at a Pinterest post of a vintage handbag from shopping site Etsy, a user may get shown a link that goes directly to the product on the Etsy app, where a purchase can be made with a couple of clicks. Or in reading a review of the new Maroon 5 album, up pops a link that takes a fan to the Spotify app, where the songs can be downloaded right away. A traveler booking a last-minute room on HotelTonight could be shown promotions for local restaurants or sporting events and linked directly to a reservation page or ticketing app.

In order for the new technology to work, it has to know a great deal about the individual user. If someone has the Etsy app downloaded and accesses it frequently, that's probably a good place to direct the click. But is it better to send a user who doesn't have the app to the app store for a potential download or to Etsy's mobile Web page? And is it preferable to send a music fan to Spotify or a different music app? That all depends on other behaviors, such as what types of apps the user downloads when given the option.

Branch Metrics, a Palo Alto, California-based start-up founded last year, said on Tuesday that it had raised $3 million in venture funding to expand its deep-linking technology that "tracks where users come from and what drove them to install the app in the first place, which has previously been a mystery to developers."

Google knows the importance of this transition. Thus far, the company has been focused on deep linking mobile search with a product called App Indexing, introduced late last year and discussed publicly at Google's developer conference in June. A mobile search for a hotel in Paris may enable a consumer to go directly to the reservation page on Booking.com's app, or a search for a nearby Sushi restaurant could quickly lead you to the right spot on the OpenTable app.

"If a user has taken the action to install an application, that's meaningful to us," said Lawrence Chang, a senior product manager at Google. App Indexing allows Google to go beyond just the front page and go into the "guts of the application," he said.

The Google tool is currently only available on Android, so iPhone users are out of luck. "It's not an easy problem, so we've been focusing on Android," Chang said.

Facebook and Twitter are also focused on building in-app links that help their mobile users get to relevant apps, but none of them are yet going after the rest of the mobile universe. The start-ups are trying.

"We can handle the more personalized situations," said Itamar Weisbrod, co-founder and CEO of New York-based Deeplink. "By doing app crawling, we can see what apps are on your phone and when they're used."

To date, Deeplink has been providing these types of links in email newsletters for companies including Shazam and menswear siteJackThreads. In the next month or two, the software will start to connect apps, meaning a much wider swath of consumers will start to see the links, Weisbrod said. Branch Metrics opened its platform in June and said on Tuesday that the technology is live or pending with 50 developers.

URX's effort is brand new as well. So new that the company can't yet mention any potential customers, though Milinovich said that will soon change.

Milinovich started URX in early 2013 after spending two years at Google working in analytics. He took the company through the Y Combinatorincubator program last year, and opened the product to a select set of developers last month.

In April, URX raised $12 million in a financing round led by Accel Partners, the firm that generated historically massive returns from its investment in Facebook. If anyone knows about backing a company that's taking on Google in mobile, it's Accel's Rich Wong, who led the URX investment and joined the board. Wong made an early bet on mobile ad marketplace AdMob in 2007. AdMob had such a head start in mobile advertising, despite its tiny size, that Google acquired the company in 2009 for $750 million.

"Sometimes you can outrun the powerful machine, and sometimes you can't," said Wong. Deep linking "is a space that's very early and there are lots of different opportunities to add value."

While Wong wouldn't put money into a traditional search company, he sees plenty of available dollars in mobile. "I just didn't think that the major players necessarily had it locked up," he said. In fact, he added, "I'm quite sure they don't."

How Michael Strahan Took Control of His Post-Football Career

This 36-Year-Old Accountant Just Made His NHL Debut, and It Shows Why You Should Always Keep Your Skills Sharp

49 Ways to Make More Money Online (or Offline) This Year