Why Your Company Must Be Digi-Friendly

By Suhail Al-Masri November 12, 2014
Opinions expressed by Entrepreneur contributors are their own.
You're reading Entrepreneur Middle East, an international franchise of Entrepreneur Media.

From less than 1% of the world connected to the Internet back in 1995, today the number of Internet users around the world are about to cross the 3 billion user milestone. In the Arab world, there are more than 135 million individuals using the Internet. This is coupled with a mobile penetration rate of around 110% on a regional level, and more than 71 million active users of social media platforms.

While Arab Internet users today make up less than 0.5% of the global Internet population at best, they have been growing at a faster than average rate in the range of 20% annually. As such, many aspects of Arabs' lives have been greatly impacted. Indeed, with around 400 million mobile devices and millions of other Internet-connected things, the proliferation of ubiquitous digital connectivity is creating new opportunities and challenges for governments, businesses, and societies alike. 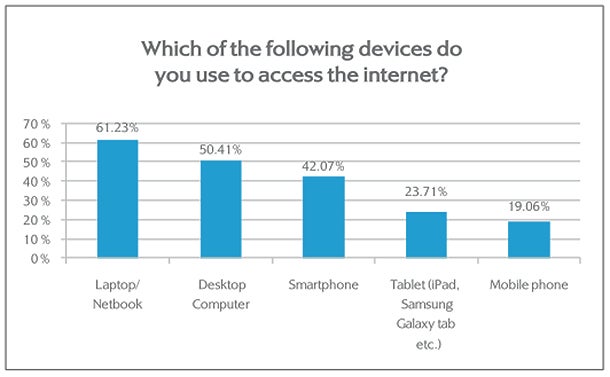 In the Arab region, Internet connectivity has transformed the ways in which millions of people do business, learn, socialize, and advance their careers. To better understand the critical changes that the Internet is spawning and their impact on businesses and people at a regional level, Bayt.com, in cooperation with the Governance and Innovation Program at the Mohammed Bin Rashid School of Government (MBRSG), conducted their second edition of a regional white paper series on the latest Internet and mobile usage trends in the Arab region, released in May 2014.

The white paper titled The Arab World Online 2014: Trends in Internet and Mobile Usage in the Arab Region is based on a survey of nearly 3,000 people from the 22 Arab countries. It examines current digital trends in the Arab world and focuses on online behaviors, e-government attitudes, online news and service consumption, e-learning as well as the use of mobile and social media in the region.

The survey reveals that the economic impact of Internet growth in the Arab region will only increase going forward. For example, in 2020, it is estimated that around 20% of the labor market in the MENA region will be related to Internet and technology industries. Unlike other mature sectors in Arab economies, these fast-growing industries will provide the majority of the badly needed new jobs.

However, in a region facing mounting social, political, economic, and public service related challenges in terms of access and quality, the barriers ahead are immense. Within most countries in the region, the digital divide is still impacting millions of Arabs who are deprived of opportunities to access information, jobs, education, and services enabled by Internet connectivity. Limited availability of relevant Arabic content online is another key barrier facing Arab Internet users. 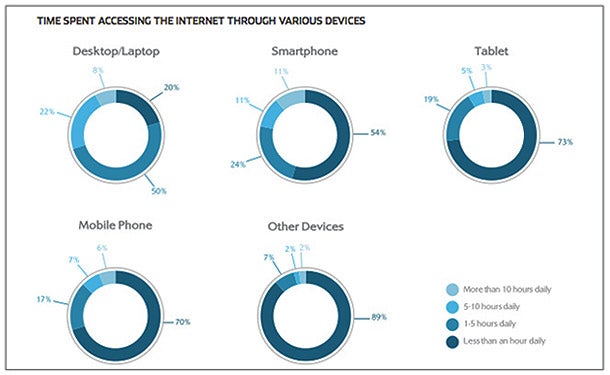 However, and despite these challenges, a staggering 94% of respondents agreed that the Internet has opened doors to new learning resources, and 79% said it had increased their involvement with their communities. Nearly 61% said they could not live without the Internet, with 63% of respondents using the Internet as a source for research at least once a day. The findings of the survey reiterate the Internet's role as an indispensable part of our lives, with 53% spending between three and seven hours daily online, and 25% spending over eight hours online per day. This should serve as a clue for entities across the region, from governments to businesses, to adopt an online presence as an essential part of their development strategies.

Bayt.com has more than a decade of experience in collating vital statistics from around the Middle East and North Africa (MENA) region. Through conducting regular MENA-wide surveys, Bayt.com seeks to portray an accurate, current representation of the opinions, habits and attitudes of the region's population.