The Weird (And Sometimes Wonderful) World Of WikiHow: Crowdsourcing Online Info On Everything

By Pamella de Leon November 15, 2014
Opinions expressed by Entrepreneur contributors are their own.
You're reading Entrepreneur Middle East, an international franchise of Entrepreneur Media.

This is what happens when people run amok on the Internet- portals like wikiHow come to exist, and they see serious traffic numbers. Don't get me wrong; the concept of wikiHow is altruistic, and I acknowledge that "helping everyone on the planet learn how to do anything" is a very grand mission statement. They aren't kidding about the "learning to do anything" part. After brainstorming the most random online searches that I could think of, I saw tips on everything from building a computer to beginner's yoga to creating your own origami dinosaur (pictures and illustrations included). But what's the point of wikiHow, and who has time to curate and write this stuff? Describing themselves as "a community of knowledge philanthropists", they rely on collaborative effort to create "the world's most helpful how-to guides". As manifestos go, that's not so bad.

It makes you wonder, who comes up with these tips? Since 2005, the founder, Jack Herrick, who previously built and sold eHow, is joined by a "small paid staff of full time employees" and volunteer community of writers and editors around the world. WikiHow really do value feedback and their community-- it's littered with thumbs up/down on their mobile site asking whether it's been helpful or not, and the site regularly features a community member's profile on the sidebar. Along the way of exploring the rabbit hole-like website, I noticed that there's three kinds of guides. 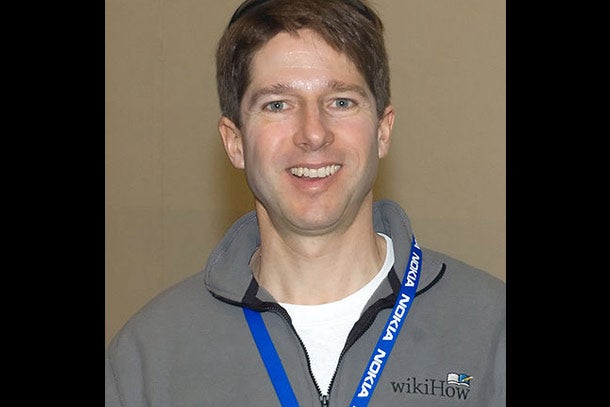 First the useful instructions, the kind that you would Google like How To Prepare For Interview Questions Thoroughly and How To Reduce Your Carbon Footprint. Then there are those that linger between common sense and philosophical topics like How To Maintain A Positive Attitude, How To Enjoy Dating and How To Stop Thinking That Accepting Help Is A Sign Of Weakness. And finally, the bat crazy, can't-believe-someone-actually-wrote-this category: How To Be Antisocial, How To Create A Love Altar, and How To Use A Computer Mouse-- yes, these guides actually exist.

In some ways, this category can actually be useful. Miley Cyrus even Instagrammed a photo when she went to wikiHow to find out how to care for her pet pig. I suppose there's something for everyone. There's also a bunch of handy ones for the 'treps: How To Buy Business Attire, How To Name Your Business, How To Start A Small Business, How To Finance Your Business, and How To Build Your Personal Brand, among others.

How is it running? WikiHow founder has taken a different approach to their business model. Just like Wikipedia, wikiHow is a wiki, which means that anyone can write or edit a page on the site. It uses a Creative Commons License to give its community the "right to fork", meaning users have the freedom to move its content and software without the wikiHow staff. With so much faith in its community and mission, the company is running as a hybrid organization, "a for-profit company focused on achieving a social good", supported financially by "showing optional advertising" (WikiNews). And it works, as of June 2014, it's the 142nd most popular website in the world, with 10 language versions and over 40 million people reading wikiHow per month according to Google Analytics. You can love it, hate it, mock it, but this sharing culture-loving website is here to stay and has a special place in our hearts… and our browsers.

Following our Editor's instructions, I let my curiosity take over and tried out a couple of their how-to manuals and even documented a bit on my Twitter feed with #wikihowadventures.

1. How To Quit Watching TV

This 15-step guide gave tips on using free time to do something else, prompting me to read books, listen to podcasts and watch documentaries. For the most part, it worked on letting me wait out Game of Thrones episodes to enjoy a documentary called Food, Inc instead. They gave practical pointers until I had to stop at a few that included, "use the TV timer", "keep a TV diary" and "get rid of and hide TVs." But most of all, it was this tip that struck out the most: "Remember that television is not a requirement for living."

2. How To Live Without A Computer

At one point of this experimental week, my laptop gave up on me and I took this opportunity to wikiHow the way to live without a laptop. It turns out I can't because one of the firsts step is just not possible: "Change your job." The page for it was adorned with Shutterstock-like photos throughout the 13-step guide. Guess what? It had been read 25,153 times at the time of my experiment- that is some serious net action.

I'm not sure what was more surprising: that such a page exists, that it takes 29 steps (with pictures!), that it had 124 editors or that it had 383,522 views. The guide makes no judgment call- whether you want to act like Dracula for a costume party or a "committed lifestyle choice", the editors who have contributed are fine with both. From giving advice on finding "vampiric inspiration", to tips like "Decide what kind of vampire you want to be", "Be narcissistic" and "Work on your soul-piercing gaze", my night was made.

4. How To Be Popular

I expected this 16-step guide with matching illustrations to reek of tips fueled by teenage angst but for the most part, it echoes celebrating one's individuality. It gave tips such as "Be yourself-- for real" and "Realize that popularity doesn't define who you are" and came with warnings of "You might not have much time of freedom after you become popular."

This is the Internet: Cray cray wikiHow instructions for you to try at home

Besides being a treasure trove of how-to guides, it's also a home base for ridiculous instructions that are pretty great conversation material.

1. How To Make People Think You Are Alien Step 6: Refuse to do something that will reveal your 'alien' self.

2. How To Be Okay With Having A Communist Friend Step 7: Focus on the better things in your friendship. Don't just argue about communism vs. capitalism all the time. Life is too short for that.

3. How To Be A Creepy Person Step 3: Get a stuffed animal like a cat or a doll and carry it everywhere you go, and refer to it as your "best friend". Pet it and say things like, "Good Bessie, Good Girl," as well as telling people not to stare at him/her because it is shy.