Twitter has started experimenting with selling ad space on your Following list, reports Marketing Land. Previously, ads have stayed firmly on the Timeline, making this a brand new piece of the puzzle for brands advertising on Twitter.

The first person to call major attention to the change was actually actor William Shatner, who realized that MasterCard was appearing on his Following list, despite him not following the account. (Is he the first on or one of the first people?)

.@jack @safety Why am I following MasterCard when I didn't add them? I do not appreciate this. pic.twitter.com/k91D6vTaXZ

Related: 10 Great Social-Media Strategies to Boost Your Results and Save You Time

Shatner focused on MasterCard's advertising efforts, and the credit card company certainly seems to be a prominent promoted account. However, it seems to be far from the only one. While scrolling through different Twitter accounts, I also spotted UNC Online on Elon Musk's account and T-Mobile CEO John Legere doling out some cash to promote his Twitter handle to tech reporter Kara Swisher's followers. 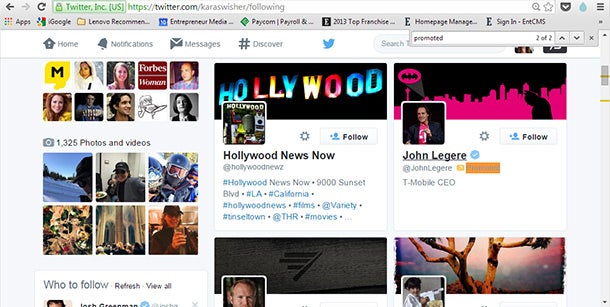 Related: Entrepreneur's 10 Most Popular Stories About Social Media in 2014

In some ways, selling ad space on your Following list is just an expansion of the current Twitter timeline strategy. However, as Shatner tweets points out, not everyone is happy with this new game plan. Followers that miss the "promoted" tag may assume the person they are following endorse these brands. For example, Visa probably didn't love this MasterCard promo:

Best one yet it's on @Visa's list of followers!!! pic.twitter.com/riPqgEMv6l