By Kareem Chehayeb March 16, 2015
Opinions expressed by Entrepreneur contributors are their own.
You're reading Entrepreneur Middle East, an international franchise of Entrepreneur Media.

The MENA e-commerce industry has been substantially growing over the past year, but there is still no single payments platform that has emerged as a leading choice for businesses in the region. 27-year-old Bahraini computer engineer and White co-founder Yazin Al-Irhayim didn’t hold back from venting about all the problems with the available online payment platforms. “I happen to be allergic to paperwork” only scratches the surface. So what sets White apart from its e-commerce competition? “Simple: we’re instant,” boasts the founder. “We get you integrated and processing cards on your own site in under five minutes.” He mentions that most competitors take at least a month before the integration process is completed.

Before working with White full-time, Al-Irhayim worked at GE for five years, starting as a Field Engineer and eventually becoming Global Finance Leader. He then packed his bags and focused on his startup, explaining that he was “too young to have a stable job this early in my life.” So what inspired someone who has been involved in computer engineering and programming since his childhood? “One of the greatest pleasures I experience is when someone actually buys a product that I built,” Al-Irhayim explains. “Unfortunately, driving over to their place to collect the money is a killjoy.” Just like many customers and entrepreneurs in the Middle East, the outdated and inefficient Cash on Delivery (COD) payment method ticked him off. But unlike a few others who’ve said that the lack of credit cards is the foundational cause of a weak e-commerce industry in the region, White’s co-founder says otherwise- he claims it’s the lack of businesses that offer online payment options. “If four of your five favorite local stores accepted online payments, then you’re going to start ordering online,” explains Al-Irhayim. “If you don’t have a card, you’ll get one.”

Setting up White was a bit of a bumpy ride. The technical side was easy, given Al-Irhayim’s expertise, but “the trickiest part about building White was forging the relationships with the banks.” Before sorting everything out with the banks, he was able to build a prototype website to test payments. “We also had a land- ing page up for a while that collected hundreds of email addresses,” says Al- Irhayim, adding that they had about 800 emails at the time. Unlike most other online enterprises, White was quite capital-intensive, but that was a consequence of being part of the e-commerce industry. Why? “Banks take a lot of your money as security collateral.” That said, there were no angel investors involved, but there was some intense bootstrapping going on. Al-Irhayim splashed US$50,000, and raised $100,000 from his friends and family. 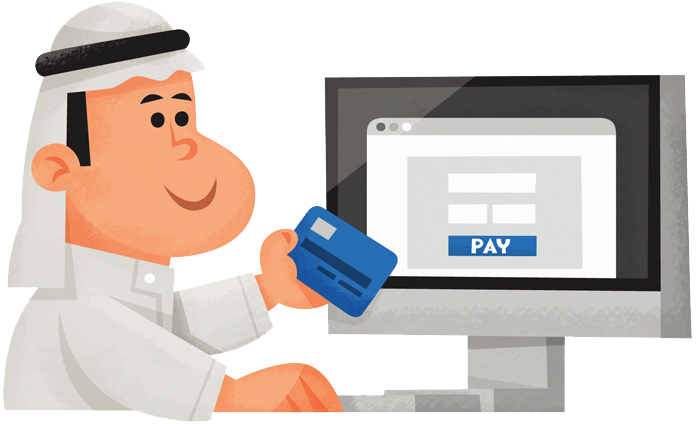 Let’s talk marketing. This is where I found things rather interesting with White. Al-Irhayim says that in “a region where word-of-mouth can make or break a business”, it’s important to make sure your existing customers are satisfied. That is exactly how he decided to handle marketing, which some might consider unorthodox. But how does that strategy (or lack thereof) pan out on social media platforms? White’s founder decided to throw another curveball, saying that neither Facebook nor Twitter has made much of an impact, and that they’ve decided to go for a more unconventional approach. “Controversial things include tweeting at our competitors, and taking a jab at them every once in a while.” Competitors, brace yourselves. That said, it’s also worth mentioning that White have put up a blog on their website, something that many other businesses are doing, which is very strategic when it comes to improving your data analytics and creating buzz- it is just good PR.

At this point in time, White is still in its beta stage. But that doesn’t mean it isn’t getting any buzz. “We’re at almost a thousand signups,” claims White’s founder, who also mentions that most of their user-base consists of startups alongside “quite a few individuals.” White recently put in recurring billing, meaning they can store “cardholder data and charge at a later date”, and are now working on features that support market places, with Al-Irhayim mentioning Uber and Airbnb as examples. What about regional expansion? If you’re in the GCC, expect White to make an appearance sooner or later, as the founder confirmed that they will expand beyond Bahrain and the UAE. That said, White’s mastermind has a greater vision, hoping to bring the payment solution to developing countries, “where there’s a need for such a solution.” When asked about which country in the region he thinks nurtures the best entrepreneurial ecosystem, White’s founder chose to only compare the two countries he’s familiar with: Bahrain and the UAE. “It’s pretty clear that the UAE has a much more developed ecosystem than Bahrain does, but Bahrain is getting there.”

White isn’t planning on releasing an app, but they are in cahoots with other companies: “We won’t launch an app of our own any time soon, but we power mobile apps of all sorts,” says Alirhayim, adding that the payment process wouldn’t redirect users off the browser like other platforms. So will White be all right? It definitely looks like it’ll stand out in the e-commerce crowd, but it is too early to tell given that they’re still at the beta stage. One thing’s for sure though: Al-Irhayim's focus on watering things down to make them as simple, smooth, and safe as possible could be a key selling-point for White in the ever-evolving payment solutions race.

The Future of Data Localization in a Globalized World

3 Types of Reward Programs Every Retail Brand Should Know About

Is Travel Cash on Permanent Vacation?