If you like traveling and you're an even bigger fan of food, then you might also be a fan of Anthony Bourdain. The restaurant chef turned author has become a popular TV personality in recent years, first with his show No Reservations on the Discovery Channel and now with Parts Unknown on CNN.

At 6 feet 4 inches tall, Bourdain has a large and respected presence in the worlds of food and travel. The 58-year-old is known for his honest, no bullshit approach to exploring and telling the story of cities around the world through the people there and the foods they eat.

Related: How to Make Sleeping on Business Trips Less of a Nightmare

We caught up with Bourdain in-between shoots. He talked about how, when it comes to food, people tend to play it safe when they travel to unknown places. He stressed the importance of eating great -- especially when in the most foreign of lands.

"If you're some place magical like Venice and you want to see the same people you see in the Hamptons or in St. Bart's then, you know, there's something really terribly wrong in your life," Bourdain says with a laugh. "If your idea of eating great only happens at places like Phillipe or Mr. Chow or Cipriani [in New York City] ... where you're paying five times the going rate then, well, it's already too late for you." 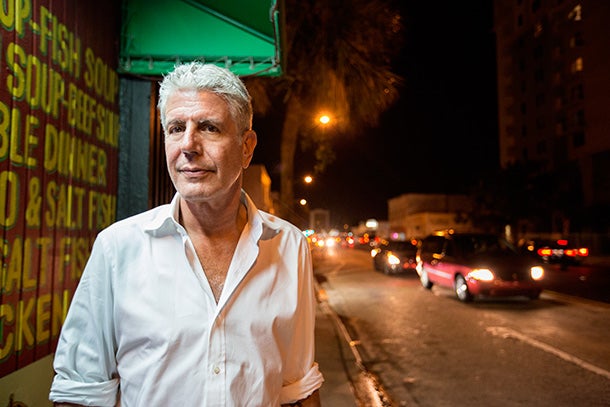 Don't settle. Be adventurous. Here are Bourdain's tips for eating great when traveling to faraway places.

The greatest meal, Bourdain says, is the one "you need right now." For instance, he recalls a time in the Caribbean when he was riding scooters with his girlfriend. Out of nowhere -- as it does in that part of the world -- it suddenly started pouring rain. Needing to get off of the road, Bourdain and his companion pulled over next to what appeared to be a dilapidated wooden shack with a tin roof. Bourdain worked up some courage and went inside.

"There was a sinister-looking dude wearing a dirty t-shirt, grilling chicken in a sort of sawed-off 50-gallon drum," he says. "Mangy dogs were walking around. But we sat down at a table under a bare lightbulb and ordered that chicken.

"Everything about it was unexpected, but it came together," Bourdain continues. "The beer was cold, the right song -- something by Peter Tosh -- came on the radio. It was a happy accident, and it was the best jerk chicken I've ever had. There's something to be said for letting great meals just happen to you."

Related: Out of Office: When You're Flying, So Should Your Mind

2. Go out of your way to get genuine advice.

While happy accidents can be great, Bourdain recommends also getting some local intel. But don't simply ask your hotel conceriege where to eat. "That conceriege is sending you to a place they know tourists will like," Bourdain says. "Don't eat like a tourist. That's not the type of knowledge you want."

Get food recommendations from real locals. This doesn't mean you should start interrogating random people on the street or in a bar, Bourdain says. Before you arrive at your destination, tap your network. Find out if you know someone -- or know someone who knows someone else -- who lives or has lived in the place you're traveling to. Ask that person about where the great food is. The individual should be able to recommend a place because the food is amazing or the experience is great, not simply because it's easy to get to or the bathrooms are clean, Bourdain says.

If you don't know anyone in the city you're traveling to, Bourdain has a fun alternative: Try posting a fake food review to an international food or travel site. Pick a random place and make up a story about how the ramen you ate there blew your mind. "Then, wait for all the angry food nerds to tell you how wrong you are and about all the other places you should go instead," he says. 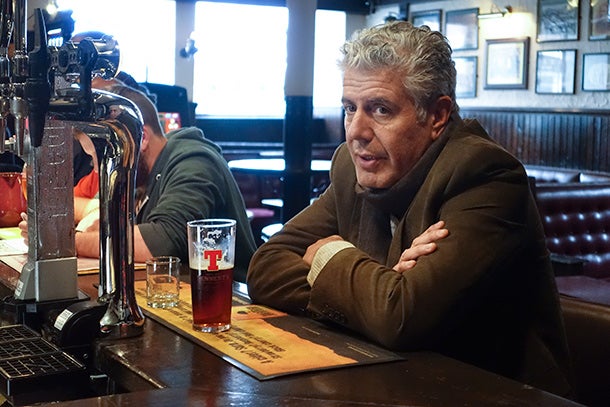 Hopefully your time abroad isn't all go go go on business. Take some time for yourself. Get outside and explore the area. Be observant.

"Look at what the locals are eating, and eat that," Bourdain says. "If you're in a restaurant where everyone looks like you, like a tourist, you probably wound up in the wrong place."

When you see locals crowding into a restaurant, the food there is probably good. Even if you aren't familiar with the food, consider giving it a try. "Work up some courage, take the plunge and just walk into a place," Bourdain says. "That simple moment when you get good yakitori or something else you've never heard of for the first time -- its a tremendous feeling of accomplishment."

Related: The 10 Most-Visited Countries In the World