Analyzing the Pearl Initiative's Report on Women's Careers in the GCC

Women of the GCC are slowly (but surely) getting the careers they truly deserve, but there is still some way to go. A recent report by The Pearl Initiative on women’s careers in the region highlighting CEOs shows not only where all the potential is, but also where improvements can be made. The report is one of many from around the world that highlights the importance of career advancements for women in business. After all, how is that 50% of the world’s population comprises of 52% of those who have completed tertiary education, yet only make up 12% of all CEOs and fill up only 17% of all board seats?

What do those figures look like in the GCC? While a relatively small percentage of women in the GCC hold positions of legislators, senior officials, or managers, even less fill up board seats. Kuwait shows the most promise, with women making up 14% of the aforementioned category, whereas Saudi Arabia and Qatar are at the bottom with 7% each. The UAE is somewhere in between at 10%. When it comes to board seats, Kuwait is also high up with 1.7%, tied with Bahrain, but short of Oman, which is at 1.8%. Women in the UAE occupy only 1.2% of board seats, but there is ample room for improvement in Saudi Arabia and Qatar as well, with their percentages standing at 0.1% and 0.3% respectively. 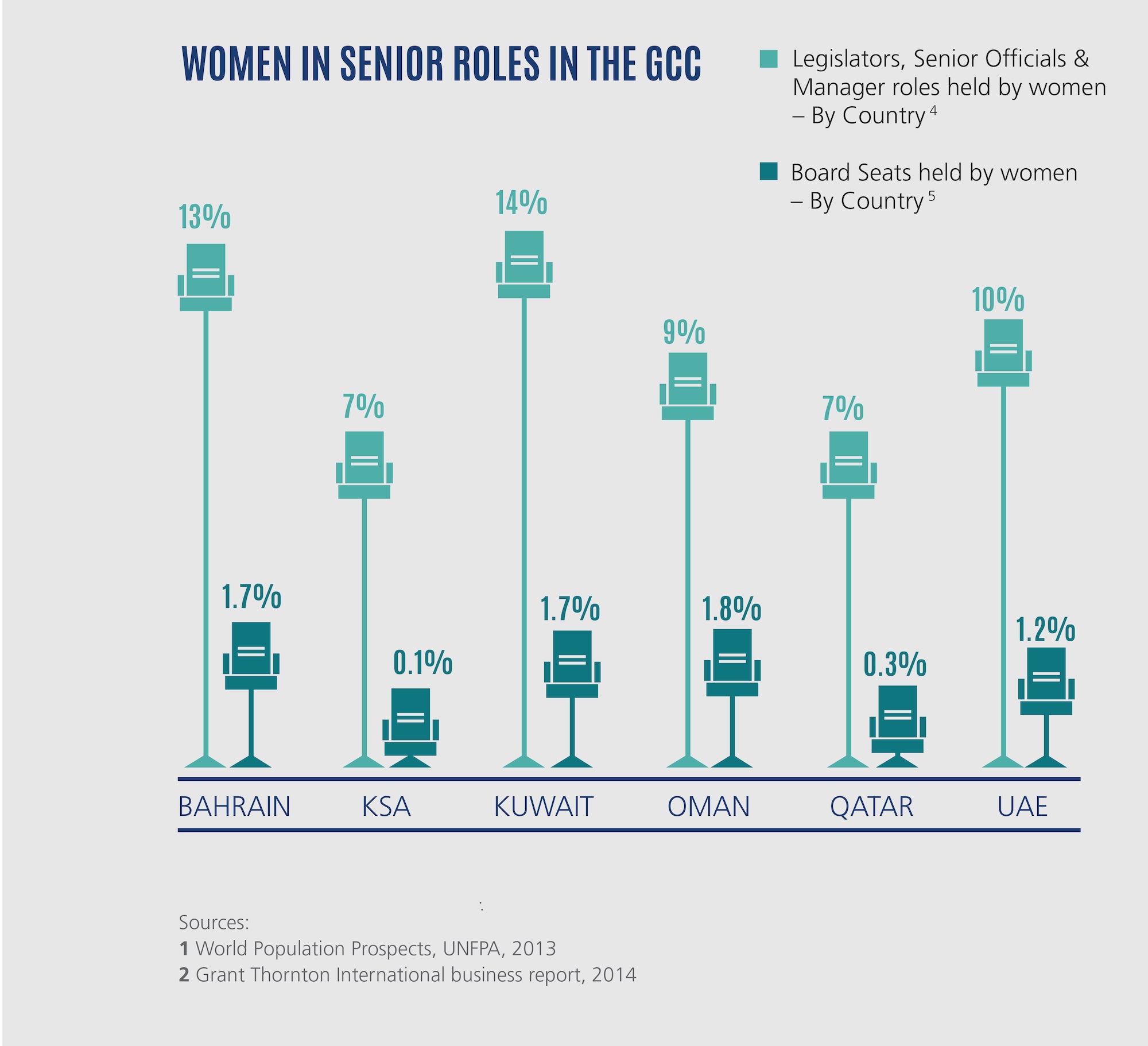 What could be the reason behind such low numbers- could it have something to do with education? The Pearl Initiative took a look at that, and the results may surprise you. Overall, there are much more women who have enrolled in tertiary education, but only a small percentage participate in the labor force. In Qatar, 88% of those who enrolled in tertiary education are women. The UAE also has a very high ratio for women at 76%. However, women only make up 35% of Qatar’s labor force and 34% of the UAE’s.  Saudi Arabia’s education ratio is almost even, with women making up 52% of those who enrolled tertiary education, but somehow only make up 20% of the Kingdom’s labor force. 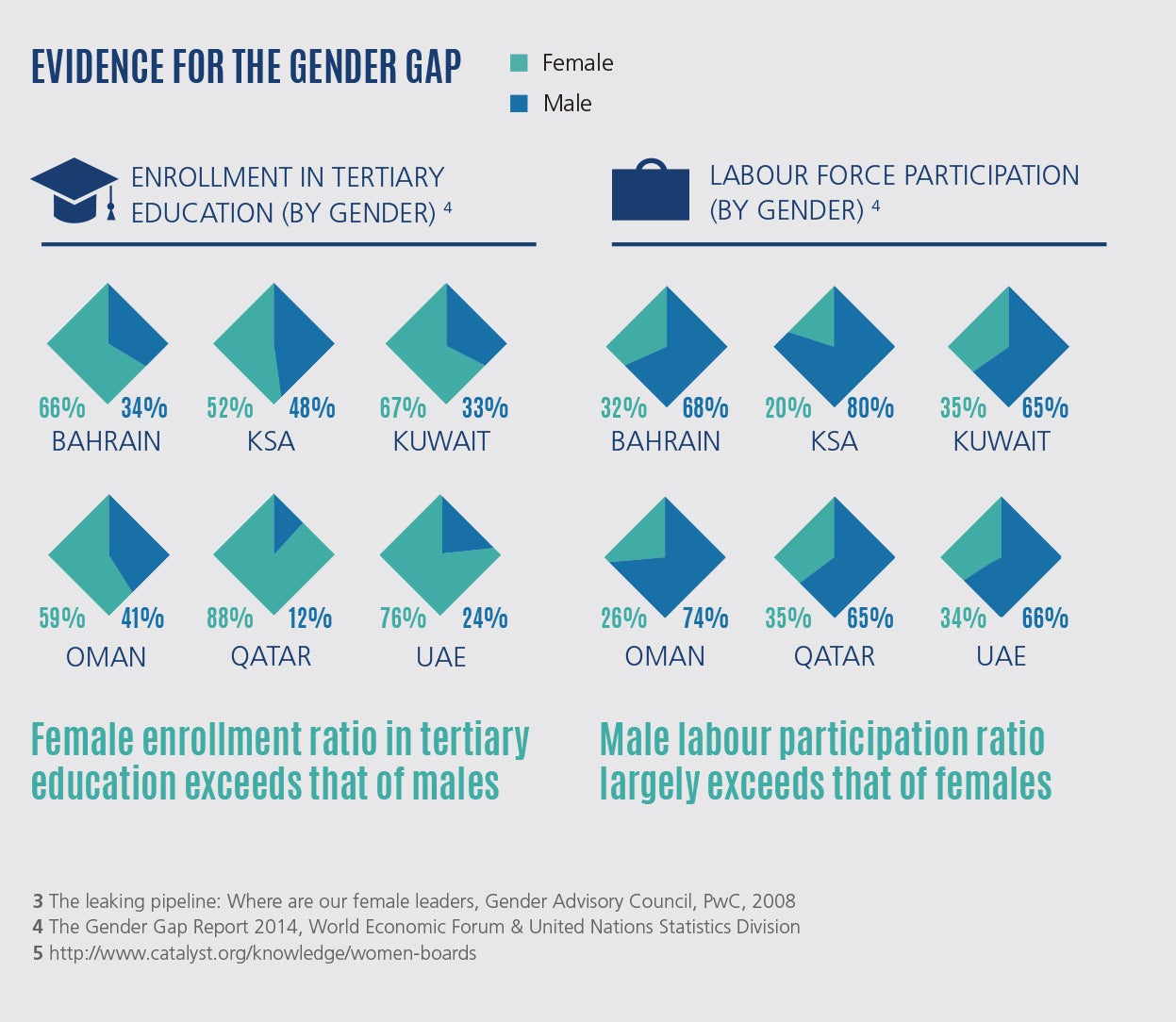 The numbers simply don’t add up. A recurring theme in the Pearl Initiative’s report is the “leaking pipeline,” also known as the glass ceiling, which basically refers to factors that keep women outside the work force, and ultimately out of that comfy CEO chair. The report divides the causes into two categories: “Workplace”, and “Personal, Family, and Society.” So what do the women interviewed think are the obstacles that keep them from progressing in their career? Only 34% claim that they wouldn’t want to sacrifice other important aspects of life, notably family and children, while 80% believe that being a woman puts them at a disadvantage. And there’s more: 67% claim that gender bias has negatively impacted their career progression, with only 25% believing that they’re treated equally as their male counterparts.

So what’s the solution to all this? The Pearl Initiative laid out a few recommendations to wrap up their report, but they first asked their female interviewees to share their opinions on the same. Over half of the respondents believe that flexible work options are critical, which easily makes sense, given that many who were interviewed were keen on a healthy work-life balance. Some other interesting ideas they suggested were training programs and various efforts within the organization to tackle gender bias- this includes gender quotas for boards and senior management. There were also mentions of maternity leave and childcare options, which is critical in bringing women to the forefront in the workplace- after all, these are benefits that many enjoy in the working world elsewhere. The Pearl Initiative echoed these sentiments, highlighting the importance of equitable HR policy, a balanced corporate culture, and investing in career paths.

Women entrepreneurs in the GCC and their strategies for ensuring the success of their endeavors will be among the many themes discussed at Entrepreneur Middle East's Achieving Women's Forum 2015, to be held in Dubai on May 25th. For more details about the event, click here.