By Travis Bradberry July 7, 2015
Opinions expressed by Entrepreneur contributors are their own.

When it comes to productivity, we all face the same challenge—there are only 24 hours in a day.

Yet some people seem to have twice the time; they have an uncanny ability to get things done. Even when juggling multiple projects, they reach their goals without fail.

“Time is really the only capital that any human being has, and the only thing he can’t afford to lose." –Thomas Edison

We all want to get more out of life. There's arguably no better way to accomplish this than by finding ways to do more with the precious time you've been given.

It feels incredible when you leave the office after an ultra-productive day. It's a workplace high that's hard to beat.

With the right approach, you can make this happen every day.

Ultra-productive people know this. As they move through their days they rely on productivity hacks that make them far more efficient. They squeeze every drop out of every hour without expending any extra effort.

The best thing about these hacks is they're easy to implement. So easy that you can begin using them today.

Give them a read, give them a whirl, and watch your productivity soar.

Productive people never put anything in a holding pattern, because touching things twice is a huge time-waster. Don’t save an email or a phone call to deal with later. As soon as something gets your attention you should act on it, delegate it or delete it.

2. They Get Ready for Tomorrow Before They Leave the Office

Productive people end each day by preparing for the next. This practice accomplishes two things: it helps you solidify what you’ve accomplished today, and it ensures you’ll have a productive tomorrow. It only takes a few minutes and it’s a great way to end your workday.

“For every minute spent organizing, an hour is earned." –Benjamin Franklin

“Eating a frog” is the best antidote for procrastination, and ultra-productive people start each morning with this tasty treat. In other words, they do the least appetizing, most dreaded item on their to-do list before they do anything else. After that, they’re freed up to tackle the stuff that excites and inspires them.

4. They Fight The Tyranny Of The Urgent

The tyranny of the urgent refers to the tendency of little things that have to be done right now to get in the way of what really matters. This creates a huge problem as urgent actions often have little impact.

If you succumb to the tyranny of the urgent, you can find yourself going days, or even weeks, without touching the important stuff. Productive people are good at spotting when putting out fires is getting in the way of their performance, and they’re willing to ignore or delegate the things that get in the way of real forward momentum.

“Time is what we want most, but what we use worst." –William Penn

5. They Stick to the Schedule During Meetings

Meetings are the biggest time waster there is. Ultra-productive people know that a meeting will drag on forever if they let it, so they inform everyone at the onset that they’ll stick to the intended schedule. This sets a limit that motivates everyone to be more focused and efficient.

“The bad news is time flies. The good news is you’re the pilot." –Michael Altshuler

No is a powerful word that ultra-productive people are not afraid to wield. When it’s time to say no, they avoid phrases such as I don’t think I can or I’m not certain. Saying no to a new commitment honors your existing commitments and gives you the opportunity to successfully fulfill them.

Research conducted at the University of California in San Francisco shows that the more difficulty that you have saying no, the more likely you are to experience stress, burnout, and even depression. Learn to use no, and it will lift your mood, as well as your productivity.

7. They Only Check E-mail At Designated Times

Ultra-productive people don’t allow e-mail to be a constant interruption. In addition to checking e-mail on a schedule, they take advantage of features that prioritize messages by sender. They set alerts for their most important vendors and their best customers, and they save the rest until they reach a stopping point. Some people even set up an autoresponder that lets senders know when they’ll be checking their e-mail again.

Ultra-productive people know that multitasking is a real productivity killer. Research conducted at Stanford University confirms that multitasking is less productive than doing a single thing at a time. The researchers found that people who are regularly bombarded with several streams of electronic information cannot pay attention, recall information or switch from one job to another as well as those who complete one task at a time.

But what if some people have a special gift for multitasking? The Stanford researchers compared groups of people based on their tendency to multitask and their belief that it helps their performance. They found that heavy multitaskers—those who multitask a lot and feel that it boosts their performance—were actually worse at multitasking than those who like to do a single thing at a time. The frequent multitaskers performed worse because they had more trouble organizing their thoughts and filtering out irrelevant information, and they were slower at switching from one task to another. Ouch.

Multitasking reduces your efficiency and performance because your brain can only focus on one thing at a time. When you try to do two things at once, your brain lacks the capacity to perform both tasks successfully.

Don’t be afraid to go off grid when you need to. Give one trusted person a number to call in case of emergency, and let that person be your filter. Everything has to go through them, and anything they don’t clear has to wait. This strategy is a bulletproof way to complete high-priority projects.

Ultra-productive people accept the fact that they’re not the only smart, talented person in their organization. They trust people to do their jobs so that they can focus on their own.

11. They Put Technology to Work for Them

Technology catches a lot of flak for being a distraction, but it can also help you focus. Ultra-productive people put technology to work for them. Beyond setting up filters in their e-mail accounts so that messages are sorted and prioritized as they come in, they use apps like IFTTT, which sets up contingencies on your smart phone and alerts you when something important happens. This way, when your stock hits a certain price or you have an email from your best customer, you’ll know it. There’s no need to be constantly checking your phone for status updates.

We’re all searching for ways to be more efficient and productive. I hope these strategies help you to find that extra edge. 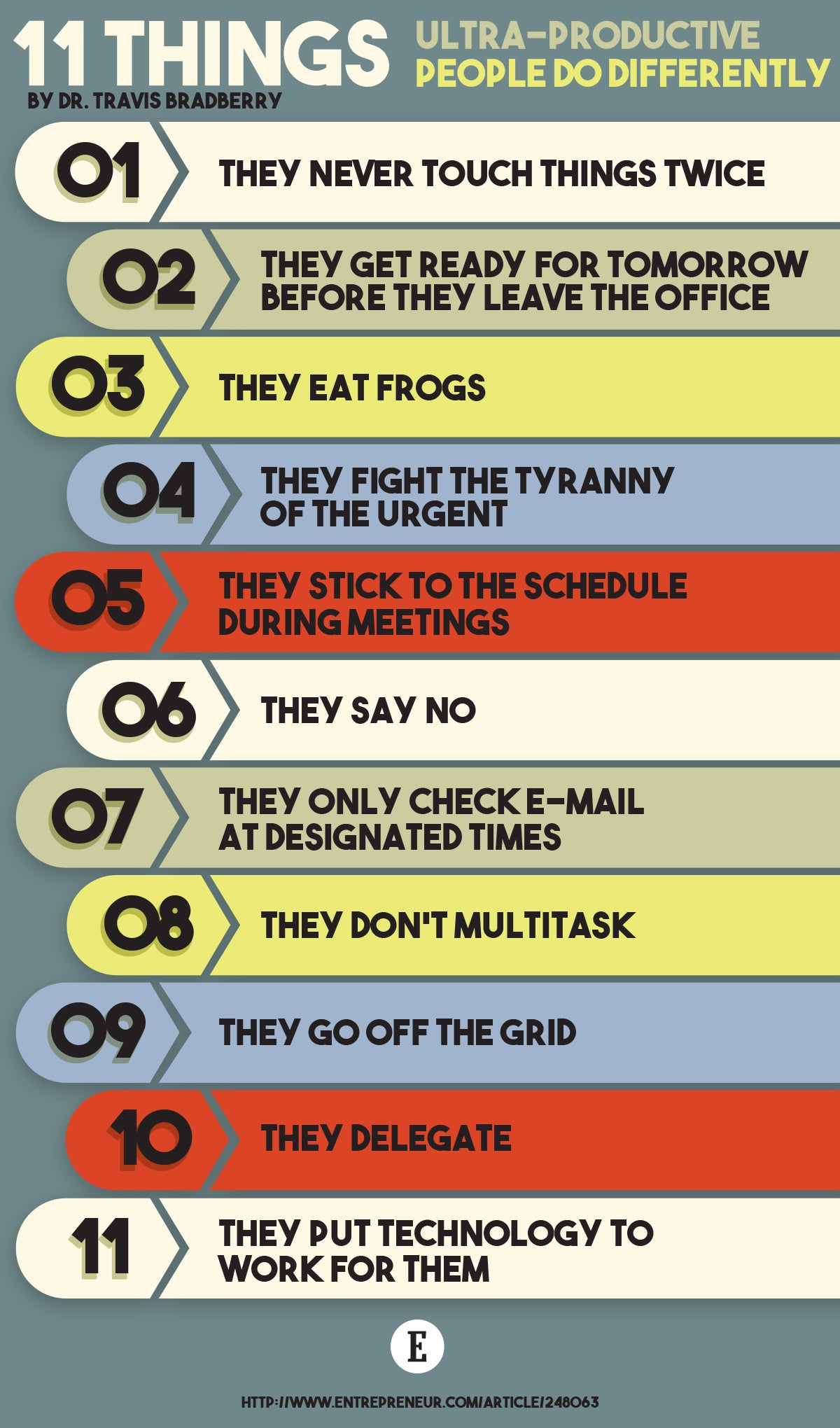