What Yatra.com learnt from Kingfisher Airlines' collapse in 2012?

By Sandeep Soni March 30, 2015
Opinions expressed by Entrepreneur contributors are their own.
You're reading Entrepreneur India, an international franchise of Entrepreneur Media.

When Kingfisher Airlines collapsed in 2012, online travel space saw an abrupt halt to its growth like never before, leading to hundreds of employees’ lay off and huge revenue loss. The incident gave a clear learning to companies like Yatra.com on managing talent in rough weather. Talking to Entrepreneur, Dhruv Shringi, Co-founder and CEO, Yatra.com, shares his views on managing and retaining talent while marching ahead on the growth path.

Any major setback in the business that helped you redefine your HR values?
In 2012 when Kingfisher collapsed, our business and industry went through a tremendous amount of change, and it took us 12 months to come out of that recession. We had to lay off around 600 people from around 1,800. As the CEO of the company, you sell your dream to the people who join you when your business was in the process of be a strong brand. So when that dream got shattered to a certain extent, going back to the same people and asking them to leave, was very challenging. But I also realised that if you were honest with people, they would take you on your face value. So we were very upfront with them, we helped them find alternative jobs and gave them due notice period. We also gave preference to them when we started hiring back.

Did you have to pivot from your initial vision?
We didn’t have to pivot but had to change our focus once or twice. Till Kingfisher’s collapse, we were in our comfort zone, so we never paid enough focus on hotels and packages business. However due to the collapse, we lost virtually a third of our revenue overnight and had to refund millions of dollars to our customers for forward booking they had done of Kingfisher. So a large part of our bread and butter evaporated and then we had to quickly scale up another part of the business to drive future growth. 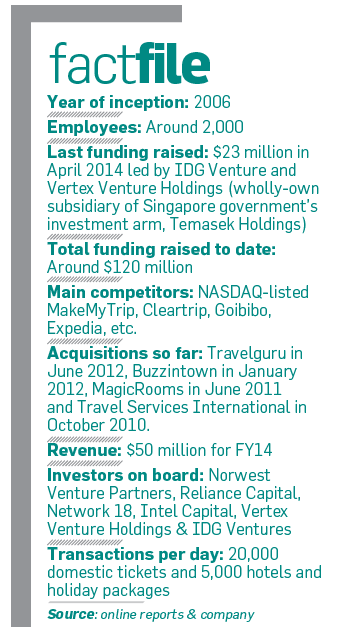 How about the cultural change? How do you define brand ownership at Yatra?
Once you become a large organisation, it becomes very hard to change the culture. The kind of culture we had with 100-200 people is not there today with 2,000 people. We initially outsourced our call centres, but realised our true brand ambassadors were the people who attend customers’ calls not Salman Khan, as their way of taking up queries could make or break the brand. So, we took all our call centres in-house to create a sense of ownership among the staff at that level.

How do you make sure the relation between old and new employees remain in sync?
Over the time when business grows, there comes a scenario where you have both old and new people in the company. Assimilating both together in a team was a challenge for us. Particularly in areas like technology where people you hired initially are from diverse background and jugaadu in nature to solve problems against new people who are increasingly process-oriented and have a good work experience. We were a bit slow to recognise this, which led to a high degree of attrition. Hence we realised the importance of forming cross-functional teams and focusing more on the skills of people instead of their backgrounds.

What should be done to help motivated and well-performing employees grow?
Make sure you have skill enhancement programmes like learning and development programmes particularly for enhancing technical skills and career counselling so that they don’t feel they are competing with the new people without proper tools. We didn’t do that early enough and we faced some backlash for that. However, we introduced those programmes around two years back and it has worked out well.

9 Things Creators and Influencers Should Know Before Signing With Management

Smiles.ai Raises $23 Million in Series A