By Laura Entis August 12, 2015
Opinions expressed by Entrepreneur contributors are their own.

Min-Liang Tan is the CEO, creative director and co-founder of a $1 billion company, but unless you're an avid gamer, you've likely never heard of him.

Indeed, on a recent ranking of the 10 most influential leaders in tech – a list that included big names like Elon Musk, Satya Nadella and Travis Kalanick – his name stands out because it's so unfamiliar. He's ok with that, though. His company, Razer -- which builds products for gamers and joined the "unicorn" club last October -- may be a serious business, but Tan's relatively low-status profile lets him fly under the radar.

Considering that he's the public face of a big company -- currently, the Carlsbad, Calif-based Razer has more than 600 employees -- he strikes a surprisingly unfiltered and uncensored figure. He runs his own Twitter and Facebook accounts (in his profile picture for both, he's onstage, next to a midriff-bearing young woman clad in a Razer-branded crop top, riling up a raucous crowd). He also says stuff you wouldn't hear coming from media-trained Silicon Valley figures like Mark Zuckerberg or Tim Cook.

Speaking at his alma mater, the National University of Singapore in 2013, he told the assembled students not to stress out about getting 'F's in subjects that don't interest them. “I’m one of the laziest bastards you’ll see in any place,” he continued, admitting that while in school he'd coasted most classes, which freed him up to concentrate on the things he was actually passionate about.

Almost exclusively, that was video games. Tan grew up on a steady diet of Wasteland, Road Runner, and Rescue Raiders. As a teenager, he booked a one way flight to Korea (ground zero for “eSports”) to compete in a video-game tournament. He remembers catching a glimpse of the reigning eSport champions in a hotel lobby; they were mobbed by fans, indistinguishable from celebrities. At that moment, something clicked into place. "I was like, wow. Everyone had been telling me that gaming is a waste of time, and then to see that..."

Back home in Singapore in the late '90s, Tan and a group of friends, including his future co-founder Robert Krakoff, would regularly get together to play the first-person shooter game Quake. Things frequently got heated. "We always talked about trying to find a competitive advantage," he recalls.

There was the consistent urge to push the boundaries of what was possible by readjusting the monitors or buying the latest controllers. But what they really wanted was a better mouse. They weren't satisfied with any of the available models, and so as a group -- one that happened to include multiple engineers -- they designed and built a mouse that fit their requirements.

In the late 1990s Tan entered a public server for testing using the mouse prototype, and promptly got kicked out for cheating. "That was the Eureka moment," he remembers. Word about the mouse spread organically, and Tan and his friends made more prototypes as the demand grew. "This was the early days of the Internet. It was crowdfunding, in a primitive way."

While Razer wasn't officially incorporated until 2005, that original mouse kickstarted the entire company. As Tan's responsibilities have grown, he's worked to retain that organic thirst for creating better gaming products, and make sure it continues to inform new Razer products. "That's what we are -- we want to build stuff we like ourselves," he says. The company, whose motto is ‘For gamers, by gamers,’ has sold more than 13 million connected devices and has a userbase of more than 4.7 million gamers, who use its software on a monthly basis. 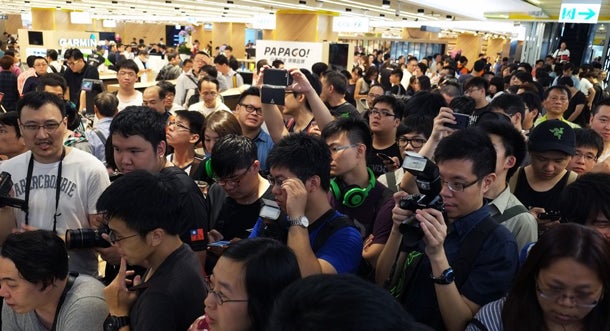 For Tan, the future of video games is interlocked with virtual reality. "It opens the door for more visceral, more immersive gaming," he says, and allows the creation of entirely new narrative forms. "It's a paradigm shift. Instead of having gamers become spectator or showing them a bird's eye view, first person shooters will have an entirely new perspective."

It will allow for the further blurring between games and real life, a line Razer has already tried to breach with Nabu X, its smart band that rewards offline behavior (reaching 10,000 steps in a day, for example, or getting eight hours of sleep) with online bonuses, like an extra life in a game.

Seeing as many of Razer's products work to gamify life in this way, it's no surprise that Tan has gamified his business, turning it into a corporate game of World of Warcraft. "We treat management as a real-time strategy game," he says. He often refers to Razer's employees not as workers, but as gamers. As such, "we don't look at things as setbacks; we look at things as challenges. We are obsessive; we will beat the hardest level, and find a cheat online."

This "gamer's mentality" has served him well, both on and offline.