How profitable are coworking spaces in India?

With so many coworking spaces being set up in India, the question arises: Are they making money? Yes, they are. In fact what’s more relevant now is how early these spaces are reaching break-even given the coworking boom in India. Roughly 100 such spaces have cropped up in the sector, which is precisely just two-and-a- half-year old in India. For most of them, it’s more of a real estate play, typically with the mindset how traditional business centres are run. In co-working, the road to profitability begins with the network the founder or owner of the space has in the ecosystem. And only a handful of them have got it correctly.

Success of a coworking space depends on many factors. Leasing out property or running it on revenue sharing basis with the landlord is one such factor until space’s founder or promoter owns the property. Crudely if we see, the better the occupancy at the space, lesser time it takes to break even. However, the idea of just filling up a centre with coworkers will only kill business faster than anything.

The crux to break even lies in building a community of likeminded people at the space through networking. This will create a steady stream of coworkers joining the space that includes start-ups, designers, SMEs, freelancers, bloggers, PR professionals, investors, app developers and consultants. In other words, today coworkers don’t join coworking just for a physical space, but for the value they can drive through the community existing at the space. For example, a start-up founder may find an app developer, investor or designer at a space. “Coworking should be looked as a value addition play instead of just having a real estate to begin with,” says Rajat Tandon, Senior Director, NASSCOM 10,000 Startups.

Other reasons that make a coworking space profitable include location, accessibility from public transport, seating capacity of the space as per its size, expenses incurred to furnish the space with decent interiors and distance between coworkers’ residence and space.

Usually, a coworking space takes around three months to a year to break even depending on these factors. Delhi-based 91springboard that pioneered coworking in India with its first space in Delhi in January 2013, currently has three hubs, out of which two are already self-sustainable. “It’s tough to say when we actually broke even with our Delhi and Gurgaon hub as breakeven in a moving bar. We didn’t take salary during our first hub, so that way we broke even very early. Then we hired some more team and invested some more amount so the break even moved to eight months and then to 13 months.

For Gurgaon hub, first break-even was in six months and then in 12 months. We started a small Hyderabad hub, that was fully occupied with 40 coworkers, and it soon became profitable until we shifted to another building recently in mid July this year, which we furnished at our own expense with a bigger setup, so now again that space is not profitable. We assume average break-even for us happens anywhere from six to 12 months normally,” says Pranay Gupta, Co-founder, 91springboard. 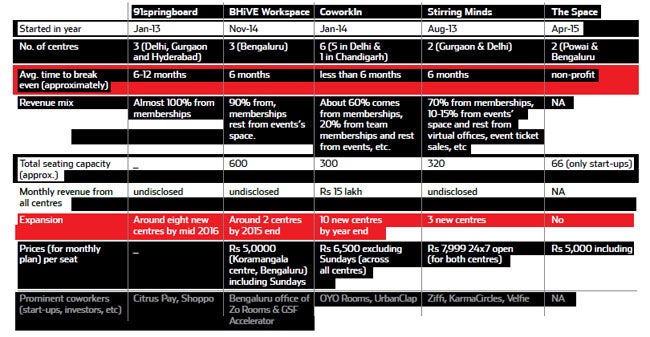 Some spaces like BHiVE Workspace based in Bengaluru even managed to break even operationally with its initial two spaces within six months. It now has advanced bookings for its upcoming spaces. BHiVE has grown strongly on the word of mouth since November last year as it is easy to have start-up enthusiasts opting for coworking in the Silicon Valley of India, Bengaluru.

“We offer 24X7 open coworking space starting at Rs 5,000 per month with regular facilities like Internet, power backup, tea/coffee, kitchen use, etc, which almost no other space would provide at this price. Moreover, unlike others, we open on weekends also. We broke even in six months by being careful in terms of cost, for example we furnished only a very small section of the space unlike other coworking spaces that spend Rs 1,500- 2,000 per sq.ft for furnishing the entire space. We spent much lesser than that,” says Shesh Paplikar, CEO and Co-founder, BHiVE Workspace. The start-up claims of offering the largest coworking spaces in the city with a combined space of 35k sq.ft.

Memberships by coworkers, use of meeting rooms and event spaces, sale of food and beverages and events’ tickets sale contribute to a coworking space’s revenue with majority coming from memberships. “Seventy per cent of our revenue comes from memberships, 10-15 per cent from events and rest from virtual offices, ticket sales, etc,” says Pranav Bhatia, Founder, Stirring Minds. The start-up has two spaces, one in Delhi’s prime commercial centre, Connaught Place, and the other in Gurgaon.

In April this year, VC firm Matrix Partners India became first of its kind to launch a coworking space in India in tie-up with realtor K Raheja Corp in Powai, with the intent to give back to the society. Start-ups in the coworking centre called The Space has the option to pay Rs 5,000 per month as the fee or give up 1 per cent equity to the real estate major. It has another 18-seater centre in its Bengaluru office.

“Making money is not our objective. The feedback we get from our portfolio companies based in Powai is that finding space is one of the major barriers to starting up especially in Mumbai where real estate is very expensive. We thought about a platform where people can get the best of the ecosystem. Other objective is to help start-ups connect with investors. Some teams in the co-working space have actually got funded as well,” says Gourav Bhattacharya, Vice President, Mumbai, Matrix Partners India.

However there is more to it. “There is an underline marketing angle to it since we are talking about our expertise in terms of value and network we bring and getting people to interact with us,” says Rakhi Prasad, Director Operations, Mumbai, Matrix Partners India. The 48-seater space offering coworking for three months on contractual basis which can be further renewed, was filled up by June. The programme, according to the VC firm, is independent from its investment process. With ecosystem’s bigger stakeholders like NASSCOM and Matrix Partners India offering coworking with better value and for a much lesser amount than coworking start-ups that render spaces for Rs 5,000-8,000 on monthly basis, it will be tough for such start-ups to retain and attract coworkers.

As industry matures and more start-ups come up, it will take lesser time for coworking start-ups to hit profitability. “In the beginning, we used to explain to people what coworking is about but now we are doing less of that as people seem to recognise ‘coworking’ a lot better now. As the word spreads and people take up to coworking, it will be easier to break even much faster,” concludes Gupta.

A Co-working Space vs. a Private Office: How Do You Choose?

#4 Ways How Every Weekday Can be a Weekend For You