Kickstarter is the reigning king of crowdfunding, but its smaller rival is working overtime to roll out products aimed at expanding its customer base.

The program is an extension and re-branding of a program that Indiegogo launched in December called Indiegogo Life, which waived the 5 percent service fee for individuals raising money for medical crises, memorials, emergencies and other life events.

While the move is a win for nonprofits, it’s also a way for Indiegogo to further differentiate from Brooklyn, N.Y.-based Kickstarter. Kickstarter has always been laser-focused in its commitment to being the crowdfunding platform for creators, so it doesn’t allow campaigns raising money for charity. That doesn’t mean nonprofits are barred from raising money on Kickstarter, but the money has to be used for something that is being created. For example, The Lowline raised nearly $224,000 to be put toward the creation of an underground park in an abandoned New York City subway terminal.

Right now, Indiegogo is number 2 to Kickstarter, whose projects have raised more than $2 billion. Projects on Indiegogo have raised about $750 million.

Indiegogo’s latest move will also put it more squarely in competition with GoFundMe, a crowdfunding platform for personal causes, charity and nonprofits. The platform charges charities fees of 5 percent on what is raised, plus a 4.25 percent credit-card processing fee.

To be sure, while there is marketing milage in positioning yourself as the crowdfunding platform for nonprofits and individuals in duress, it’s also expensive. Essentially, Indiegogo is eating the costs of maintaining and running the crowdfunding campaigns of nonprofits that opt to use the platform. Indiegogo declined to comment on revenues or what portion of current revenue comes from these cause-based campaigns.

Related: 5 Tips for Launching a Non-Profit Campaign on Kickstarter

The company hopes that, when someone makes a donation, they will leave a “tip.” Indiegogo Life automatically tacked on a 15 percent “tip” to your donation but left users the option of editing or deleting that tip. Generosity by Indiegogo has a similar tip option. The revenue from those tips, in addition to revenues from other parts of Indiegogo’s business, make it possible for Indiegogo to offer the fee-free option.

Indiegogo co-founder Slava Rubin says consumers’ positive reception of Indiegogo Life was a motivating factor in launching Generosity by Indiegogo. “We have seen a significant increase in the use of Indiegogo Life and people using Indiegogo for their personal fundraisers so we have had a lot of requests and thinking around nonprofits and we are excited to be able to open up Indiegogo Life to nonprofits,” he says. 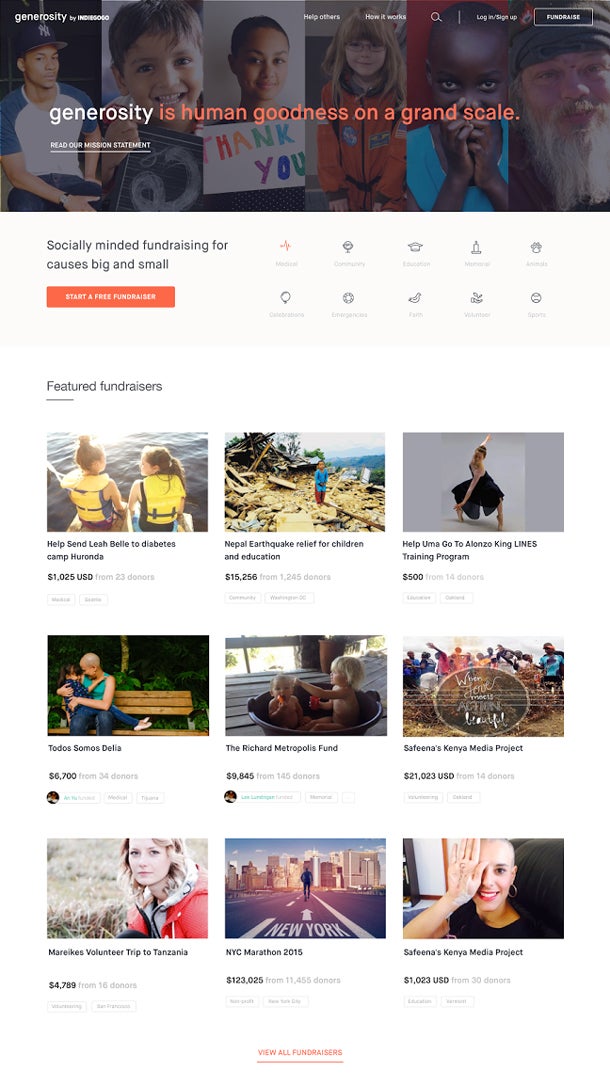 Related: Kickstarter CEO: Why We're a Benefits Corporation, Not a Nonprofit