Take Care Of Your Cash: compareit4me.com CEO Jon Richards Has All The Info You Need

By Kareem Chehayeb November 9, 2015
Opinions expressed by Entrepreneur contributors are their own.
You're reading Entrepreneur Middle East, an international franchise of Entrepreneur Media.

In a cosmopolitan city like Dubai, it only makes sense that expats from across the globe could use a hand in sorting out a few things in the finance department after moving to their new home, starting with opening a bank account in an institution they feel is the best fit for them. That’s what Jon Richards went through after moving to Dubai eight years working in the digital domain in the U.K., Richards made his way to Dubai to spearhead propertyfinder.ae’s digital team. When he got here, he found it hard to make a decision on choosing a bank that was right for him. “I didn’t know which products were right for me, and there was no way of comparing finance here back then,” he remembers, noting that back home in the U.K., people would not make big decisions like that without comparing them to all of the options they had. Because “there wasn’t a great deal of product information available online,” compareit4me’s CEO realized that there’s a gap in the market that he could fill- and a site was thus born.

It seems like a straightforward concept, but I asked Richards to elaborate some more about compareit4me’s services and platform. The founder says that the platform’s concept is a “win-win for both consumers and banks.” For consumers, it’s a free and useful platform, and for banks, it gives them access to what he describes as “educated users”: these are the people who have been doing their homework and are ready to start talking and make a decision soon regarding their finances. compareit4me.com offers a wide array of services, and given that it has been expanding across the region, I had to ask if there were any kind of users that were the most active. Richards didn’t specify a type, claiming that the user base is “extremely diverse.” And the most popular service of the platform? “Personal loans is definitely the greatest percentage of users,” claiming that they account for about 40% of the 45,000 applications per month. Things are a tad bit different during the Ramadan season though, where he notices a “spike” in car finance searches. He also mentions that credit card-related inquiries tend to increase during “key” holiday seasons.

One feature that stood out to me was the SME database. “We understand all of the challenges with SME finance,” says the CEO; after all, compareit4me is an SME as well. He says that there are “lots of SME banking products” out there, and that it’s important that they can help as many different “commercial users” as pos- sible. Sounds like a standout feature, and speaking of that, I then asked Jon Richards about what he thinks makes the platform better than its competition (I even had the audacity to mention a competitor). Despite not making direct comparisons, Richards focuses on the specifics of compareit4me, saying that it is the only MENA-based website that is “dedicated solely to finance and insurance.” He concludes that keeping their platform narrowed and specific would give them more credibility and of course helps them maximize the platform’s efficacy. 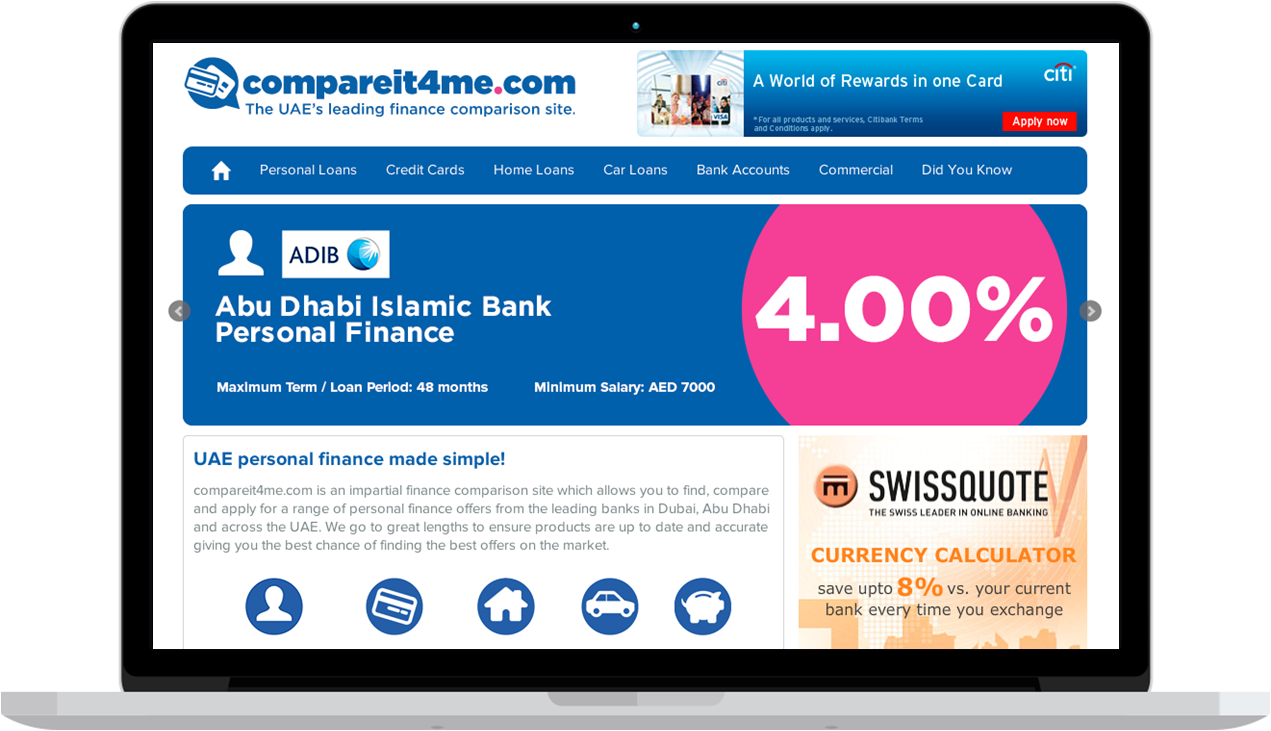 Developing the online platform wasn’t easy, but it wasn’t capital-intensive either. Richards, alongside co-founder and COO Samer Chehab, bootstrapped the site, and used their individual skills and career backgrounds to minimize costs. The tasks were divided among the two: Richards focused on the website and marketing, while Chehab “managed the bank and media agencies.” According to the CEO, Chehab’s 10+ years of media sales experience in the MENA region was incredibly helpful in this regard. It’s quite impressive how the two managed to sort all this out on their own- the only mention of a third party was an unnamed U.K.-based design agency that “originally developed and designed” the platform.

Things have changed since the launch of the website. Despite costing less than US$5000 to start the business, costs have increased; they have received some help through an angel investor since the launch of compareit4me.com. They first received a round of invest- ment in March 2014 from Mulverhill Associates, run by former Abraaj Capital Director Jonathan Hall. Richards calls this investment “smart money,” as this relationship allowed for them to make use of networking opportunities with VCs, as well as accounting and legal experts. The company now has a staff of 18, and Richards expects the team to hit 24 people by the end of the year. The development team is now in-house as well. Marketing still remains to be the company’s biggest costs, which is a fair indicator of Richards and Chehab’s ambition.

With compareit4me’s presence now almost MENA-wide, it’s safe to say that the platform has been well received. The platform’s available in most GCC states, notably Qatar, Bahrain, Kuwait, and the UAE. Saudi Arabia isn’t out of the picture, as it’s part of an Arabic version of the platform alongside Lebanon, Egypt, and (soon) Jordan called Amwalak, which means “your money.” After asking Richards about the reason behind the decision, he simply said that it was based on language preference of the majority of the audience, and reassured me that “the services are exactly the same.” Despite the encouraging reception to compareit4me.com, the CEO is more determined than ever to keep improving its service both for banks and consumers. For the former, he wants to keep trust levels at a high, saying, “If a bank doesn’t get a positive ROI, they won’t continue to spend with us, so we’re committed to that partnership.” Regarding the latter, Richards has been welcoming and hearing all kinds of feedback, which appears to have been mostly positive.

With marketing taking the biggest slice of the pie when it comes to costs, it’s certain that compareit4me has an interesting strategy for the same. Richards claims that it has been “performance led” to date, meaning that they’ve been targeting consumers who are actively looking for a comparison platform. However, they want to move past that to take on consumers who may not be aware of comparison platforms, let alone one catered to their respective country of residence. Richards says that despite compareit4me’s success, the “comparison industry” in the UAE and the rest of the Middle East is still small, so it’s important to “educate” people about the benefits of referring to comparison platforms like his. Therefore, it’s expected that social media plays an important role in their marketing strategy. While also using LinkedIn and Twitter, Facebook has been the startup’s primary social media focus. The CEO describes the social networking tool as “amazing,” citing that his company’s page is almost at 100,000 likes as of October, and that the team has appreciated all of the feedback and comments they’ve received through their page. There’s also a blog section on their website that has advice on effective debt management, as well as a news section that keeps people updated with what’s going on within the banking industry.

With almost eight countries already on board, expansion continues to be a part of compareit4me’s future plans. While Richards and co. want to make their services available MENA-wide, they’re also looking at opportunities in Asia and Africa. They’re also gearing up for some more funding. “We’ve just closed a $3 million round of investment from STC Ventures, the VC arm of Saudi Telecom, [and] Wamda Capital, which is headed up by Aramex founder Fadi Ghandour, and Dubai Silicon Oasis Authority.” Given the success he has seen with his enterprise, what tips would Richards give a young and aspiring ‘trep in the region? “Do not invest too much money until you have proof of concept,” he replies. “You can get a pretty good site built for very little money and prove there’s a market for your product or service.” That’s some solid startup finance management advice right there, and the rest of us would be wise to follow it.