Hot Spots For Budding Entrepreneurs: Top Cities In MENA For Your Business

By Suhail Al-Masri November 30, 2015
Opinions expressed by Entrepreneur contributors are their own.
You're reading Entrepreneur Middle East, an international franchise of Entrepreneur Media.

If you're hoping to set up a business, finding the right place to start is a critical first step. We have identified the top cities in the Middle East that are hot spots for budding entrepreneurs. Each offers attractive qualities you should look for in a home base: accessible sources of funding, little taxes, and a well-educated workforce to ensure you'll have plenty of promising job applicants when you're ready to hire. When it comes to the ease of setting up a new business, Manama and Dubai get the highest rating (53% and 52% respectively). Abu Dhabi, Dubai and Manama are the top cities when it comes to lack of bureaucracy in procedures and paperwork (54%, 52% and 49%). Sharjah is at 47%. In terms of the ease in finding capital to start a business, half of Dubai respondents gave their city a positive rating making it the best city in the region in this aspect, followed by Abu Dhabi (44%) and Manama (42%).

Dubai takes the lead in terms of market willingness to accept new ideas and innovations (68%), followed by Abu Dhabi (56%) and Sharjah (51%). Dubai is also the top city in terms of the supply of local talent to employ (52%). Lastly, Manama takes the lead when it comes to affordability of taxes and fees followed by Muscat and Doha (59%, 54% and 53%). The October 2015 Top Cities in the MENA survey aims to understand the opinions of people living in MENA countries about their city of residence. It aims to assess the key cities in the region on various aspects that have direct impact on the quality of life of its residents, and to develop an overall index based on several parameters, including the standard of living, economic factors, socio-cultural factors, environment and labor rights.

The happiest cities in MENA

Residents of big cities typically earn higher wages, but are they any happier? According to the Bayt.com Top Cities in the Middle East and North Africa Survey 2015, they are. The survey shows that Abu Dhabi residents are the happiest in the region about their current city of residence, with 83% of them stating so. Manama and Muscat follow closely in terms of overall happiness, at 79%. On the other hand, residents of Beirut are the least happy with only a little over a quarter of them (26%) stating their happiness about their city of residence. 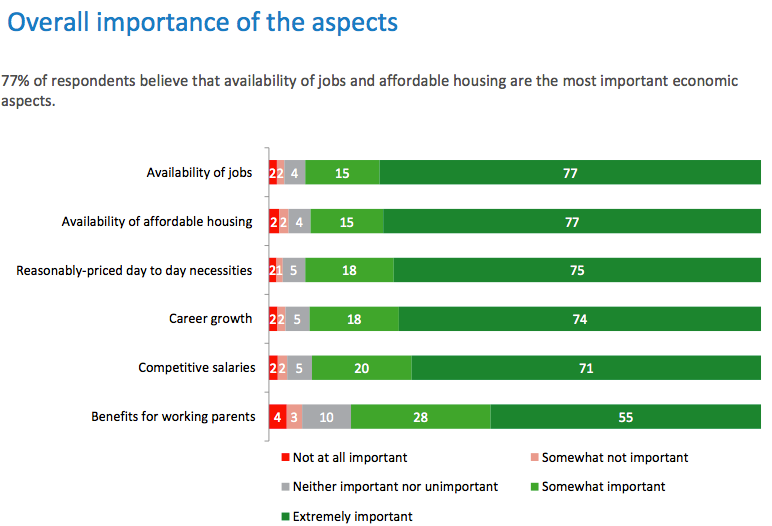 The economy in the Middle East is expected to reach a milestone in the next few months, with four in 10 respondents in the September 2015 Consumer Confidence Index Survey saying that they foresee their country's economy to improve in the next six months. According to the same survey, 43% expect their financial situation to improve, while 51% predict better business conditions. The GCC is home to the top cities in the region when it comes to the highest forecasted employment growth. Leading the way is Dubai and Riyadh with about half of respondents expecting a rise in the number of jobs offered (48% and 47%, respectively). Dubai is also rated highest in terms of competitive salaries (43%), followed by Abu Dhabi, Riyadh and Doha (all at 40%). These statistics are consistent with results from the August 2015 Middle East Job Index Survey where the majority of employers in the region said they will be hiring for new positions in the next three and 12 months. For career growth, Dubai emerges again as the top city with 54% rating it positively. In terms of affordable housing, Manama takes the top spot (48%), followed by Muscat (42%) and Sharjah (40%). Manama (64%), Riyadh (54%) and Eastern province (52%) were rated best when it comes to reasonably priced day-to-day amenities.

The Top Cities in the Middle East and North Africa Survey 2015 measured labor rights in a city along seven key factors that affect the lives of its residents. These factors are not only crucial for the working population but also have an indirect impact on the non-working population. They have been identified as follows:

Environmental factors form a set of important aspects related to comfort and cleanliness that affect the overall quality of life in a city. According to the Bayt.com Top Cities in the Middle East and North Africa Survey 2015, Dubai was rated highest in terms of clean streets and roads with a vast majority stating so (93%), followed closely by Muscat (91%) and Abu Dhabi (89%). In terms of comfortable weather, Amman emerges best (46%) followed by Muscat and Abu Dhabi (both 45%). Muscat is rated the top city in the region when it comes to clean air, as stated by 75% of its residents; Abu Dhabi and Dubai follow (67% and 64%, respectively). Dubai takes the top spot in terms of beauty of architecture and buildings, with the vast majority rating it positively (92%). In terms of manageable traffic, Abu Dhabi is rated best (72%), followed by Muscat and Dubai (69% and 63%, respectively). 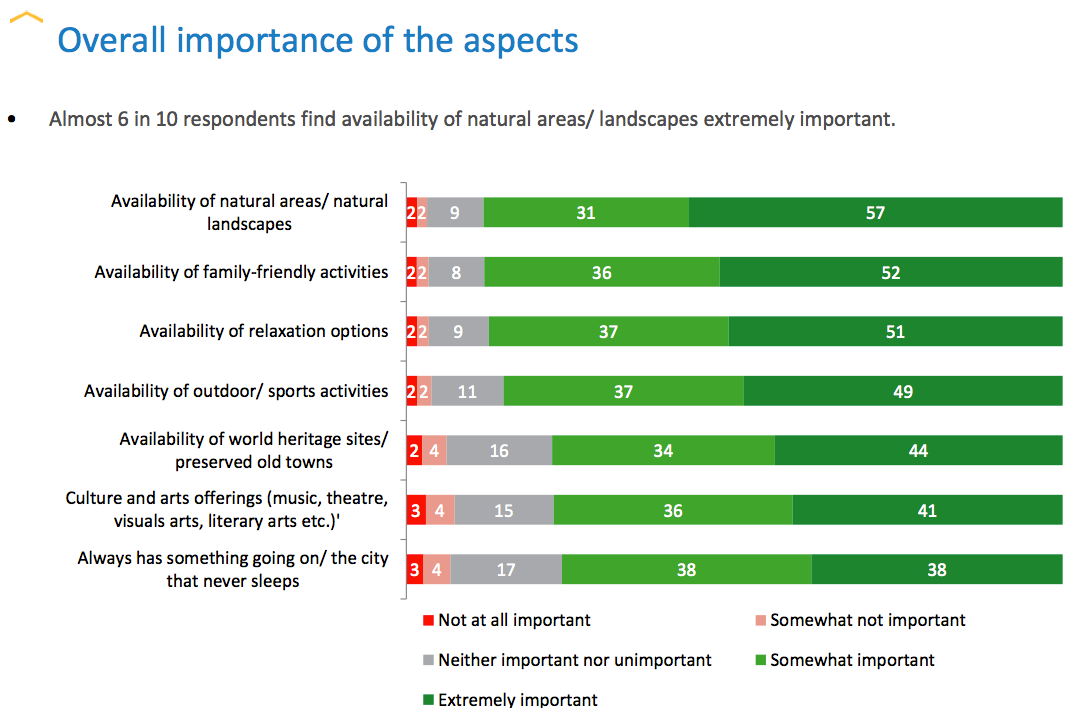 The best standards of living

The UAE scores best when it comes to the standard of living, with Dubai at the top spot followed by Abu Dhabi and Sharjah. The three Emirates emerge again as top cities in terms of availability of parks/ community gardens, with 81% for Dubai, 77% for Abu Dhabi and 74% for Sharjah. Muscat also gets a high score (73%). When it comes to the availability of healthcare facilities, Abu Dhabi is the best city (82%) followed by Dubai (77%) and Manama (70%).

Dubai takes the top spot for accessible public transportation, with 84% of its residents giving it a positive rating; Abu Dhabi follow at 77%. Dubai and Abu Dhabi are also the top two cities in terms of the quality of their public transportation system (89% and 76%, respectively). The same is true for availability of wide range of entertainment avenues for which Dubai received 89% of votes and Abu Dhabi 84%. In terms of availability of educational institutions, Beirut is the leading city, followed by Dubai, Sharjah and Amman. Abu Dhabi, Sharjah, Muscat and Dubai are the top cities in terms of the feeling of stability and security.

The sociocultural factors are forces within cultures, societies and cities that affect the thoughts, feelings and behaviors of individuals who are a part of them. They include the equal treatment of both genders; the fair treatment of all nationalities; a stable political environment; low crime rates; freedom of expression; and tolerance to different cultures and ideas. Dubai and Muscat are the best cities in terms of equal treatment of both genders (both 76%) followed by Abu Dhabi (72%). When it comes to fair treatment to all nationalities, Muscat emerges as the best city (67%). The three Emirates (Abu Dhabi, Dubai and Sharjah) emerge as top cities in terms of the stability of their political environment (83% for Dubai and 79% for both Abu Dhabi and Sharjah). Muscat also scores very high, at 82%. In terms of effective law enforcement, the three UAE emirates are on top (85% for Abu Dhabi, 84% for Dubai and 80% for Sharjah). Manama takes the top spot in terms of freedom of expression (63%) followed by Dubai (60%), Abu Dhabi (57%) and Muscat (55%). Muscat is rated highest in terms of tolerance to different cultures and ideas with 79% rating it positively, followed by Dubai at 74%. 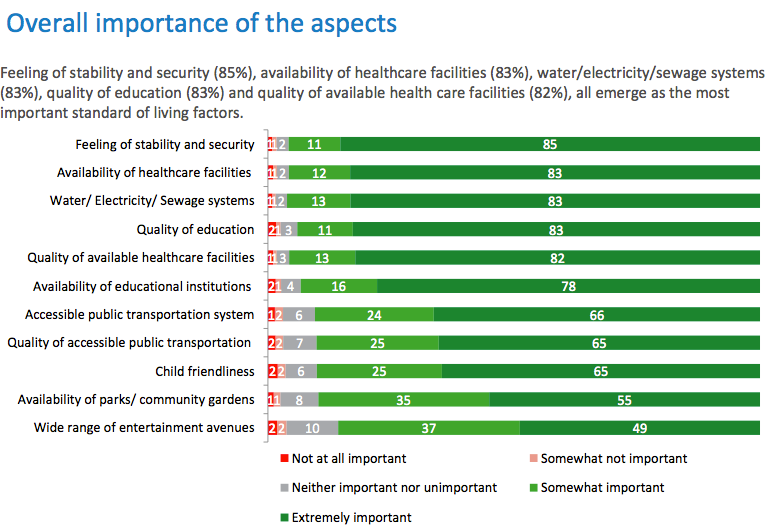 Middle East professionals have repeatedly manifested an entrepreneurial streak. In fact, the Millennials in the Middle East and North Africa Survey, February 2014, shows that 20% of respondents in MENA would prefer to have their own business. Innovation is never easy, though. Hardship and necessity underpin much entrepreneurial progress, largely because the motivation to enter the unknown in the face of bleak odds simply is not in abundance when more comfortable avenues remain to be explored. The Top Cities in the Middle East and North Africa Survey 2015 shows that there is always room in the regional market for new ideas, products, services and multi-million dollar success stories– if one knows where to look.

The best cities to live, work and do business are also those that offer the best quality of life. Defining the term "quality of life' is not an easy task. In fact, what constitutes a good quality of life has occupied philosophers since Plato and Aristotle, and countless definitions have been proposed. Nevertheless, it seems possible to find some elements on which most economists and scholars agree. First of all, "quality of life' is used to evaluate the overall wellbeing of individuals and societies. Although most studies on the quality of life do take into account indicators of economic success such as income per capita, wealth and employment, they also go beyond those measures to include the environment, physical and mental health, education, leisure time, infrastructure and safety. Also often included are concepts such as freedom of expression, human rights, social belonging and happiness. 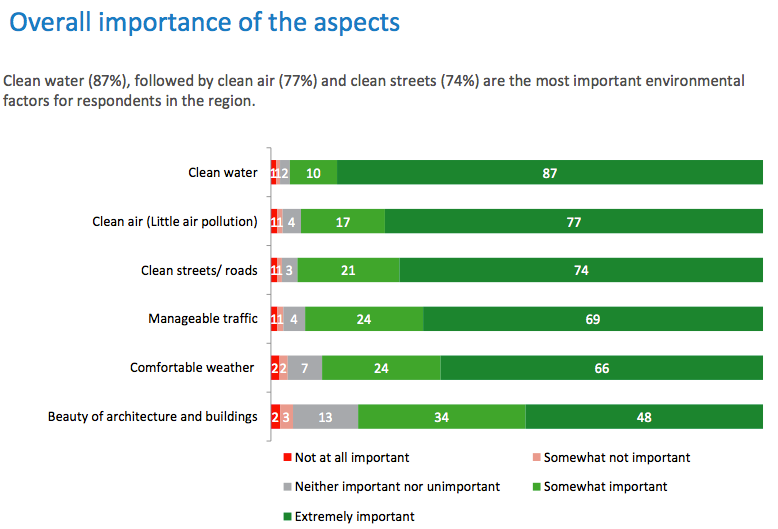