Less Than a Third of Crowdfunding Campaigns Reach Their Goals

Overwhelmingly, crowdfunding campaigns do not meet their fundraising goals. Between 69 and 89 percent of projects -- depending on the platform -- fail to reach their targets, according to a new report.

The report from London-based market research firm The Crowdfunding Centre analyzed data for 2015 campaigns from five of the largest U.S., U.K. and Canada-based crowdfunding platforms.

Kickstarter, the New York City-based Kleenex brand of crowdfunding, saw 31 percent of its campaigns reach their fundraising goals in 2015, according to the report. That’s the highest success rate among the five crowdfunding platforms included in the study.

Twenty six percent of crowdfunding campaigns on Vancouver, Canada-based FundRazr met their goals in 2015, according to the report. U.K.-based Crowdfunder had 19 percent of its campaigns meet goals, San Francisco-based Indiegogo had a 13 percent fully-funded success rate and New York City-based RocketHub had only 11 percent of campaigns on its platform meet their goals.

To be sure, there are a smattering of factors that contribute to the success or failure of a crowdfunding campaign. For example, Kickstarter has all-or-nothing fundraising rules, meaning that if the established crowdfunding goal is not met, donations are returned to backers and the campaign owner walks away with nothing. That’s motivation to hustle hard.

Other platforms, such as Indiegogo, have a flexible-funding option so that no matter what percentage of the fundraising goal is reached, the campaign backer still gets the money.

Other factors affecting the success or failure of a crowdfunding campaign, such as how visual the page is and how far ahead of time the owner starts promoting the campaign, have nothing to do with the platform that is hosting the campaign.

However, it’s worth noting that Kickstarter, the platform with the highest percentage of successful campaigns, had by far the highest average number of backers per campaign. Meanwhile, the average pledge made to a Kickstarter campaign was the lowest of all the surveyed platforms. 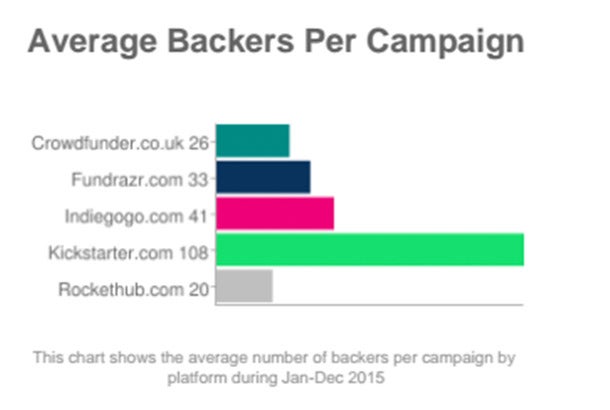 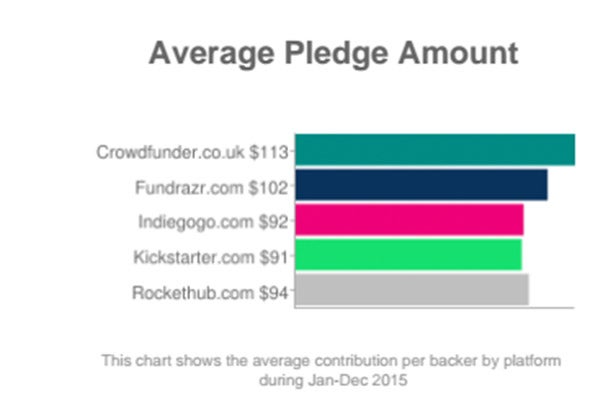 The takeaway for anyone looking to raise funds on one of these platforms? Don’t depend on a small number of donors to lay down the big bucks to get your campaign to the finish line. Instead, spread the word of your crowdfunding campaign far and wide.