You Should Read This Before You Order Freedom 251 Smart Phone

By Rustam Singh February 17, 2016
Opinions expressed by Entrepreneur contributors are their own.
You're reading Entrepreneur India, an international franchise of Entrepreneur Media.

Unless you’re living under a rock with no access to the Internet, it’s impossible not to be interested in the super mysterious world’s cheapest smart phone, Freedom 251 priced lesser than a pizza @ Rs 251.
Here are the specifications of the phone as we know it:

The company has not revealed anything about their return policy, but do offer a yearlong warranty.

I dug as much information there is possible to find out more about the phone and here’s a comprehensive list of what I found out.

The numbers do not make any logical sense

No matter how bulk the company plans to sell, the numbers simply do not add up. Even using Chinese duplicate cheap imitation material, the cheapest logical cost of a smart phone can currently account to Rs. 1000 (in theory. Practically, this figure would be much higher). And this is excluding advertising and retail costs!

Who is this company “Ringing Bells” anyway?

The company was built-in just recently on September 16, 2015, by director Mohit Kumar Goel. Ringing Bells also brought on additional directors Sushma Devi and Rajesh Kumar on November 2 last year. Goel has three decade long family business of agricultural products and has by that logic should have money to invest. His share capital is a whooping 1 crore and paid up capital is 60 lacs. But this doesn’t explain why he would suffer a loss to sell a product.

I dug out multiple emails and numbers of the company, both through official publically visible records as well as the information they registered their office as well as URL to. Every possible form of contact is either not working, unavailable or perpetually busy.

Media personnel visited the office on launch day expecting some response, but were greeted with a deserted office. The office guard was busy fending off a hype of a crowd, and provided no answers to even how many people employees are working inside usually. Wouldn’t publicity be something every company desires?

What’s the deal with 4 months of waiting?

It takes lesser time to truck a lot of sand and mine it into glass used to make the screen, dig out petroleum form overseas oil banks to make plastic and even manually screw the products together. Why would they make such hype and open orders and then announce there’s a four month waiting period? The average consumer would have long forgotten even ordering it by then!

It goes without saying if you’re pricing a smart phone that is going to sell for less than the price of a decent meal, then there are going to be more traffic on your URL than you’d imagine. But the servers are not backed to handle so much traffic. It is difficult to visit the URL than IRCTC a few years back. Even if you manage to load the website, the chances of placing an order without an error are next to impossible. If they want to sell out more phones than ever have been sold within a week of their launch – which they can if it is indeed as advertised – they should have invested to their website as well.

In fact the back-end of the website is so bad that you can literally order half a phone – paying half the money - and it’ll complete your order! 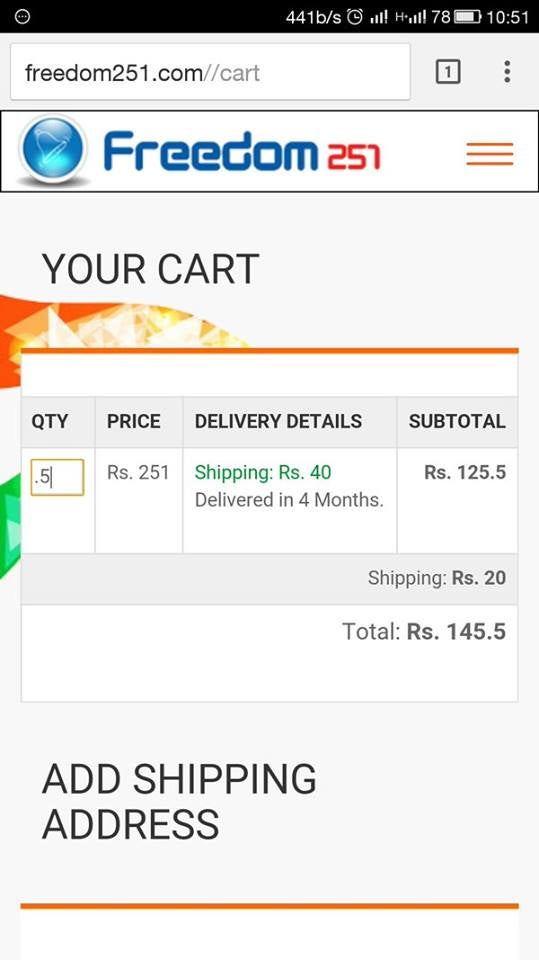 What do you think? Have you ordered the phone yet, or do you think it’s another scam? Let us know in the comments on our official Facebook page, Entrepreneur India