The How-To: Managing Fear As An Entrepreneur

Be it the fear of financial hardships, the fear of losing a client, or the fear that the business is simply not going to work out in a crowded and competitive marketplace, fear is one emotion that the entrepreneur is going to experience a lot of throughout the journey of founding, building, and running a company.

According to research out of the UK released as part of an initiative called Business is GREAT, which encourages entrepreneurs to "take the leap," 78% of would-be entrepreneurs put off launching their own business purely because they were afraid. Now we can't know for sure just how passionate those surveyed were about actually wanting to start a business, but let's assume it was something most truly did want to do and gave a lot of thought to. In such a case, then, that would amount to a lot of potential entrepreneurs not moving forward with their dreams solely due to fear.

No doubt we underestimate the role fear plays in the many decisions people make –or do not make– when it comes to business. Most who think often about starting a business, even if that desire is indeed a rather strong one, simply will never get around to doing it because they are held back by fear or thoughts of all the bad things that "could be" once the journey begins.

It would be foolish not to acknowledge that the fear of failure is a significant obstacle that entrepreneurs must tackle as part of their journey. It is so common, in fact, that it's something that has to be put on the table and faced head on. What this means is that in the startup phase in particular, where there is the potential for many to lose so much, your job is not to eliminate fear, but to move forward despite it.

Here's a great quote that can be hijacked to very accurately sum up the fortitude required by the startup entrepreneur. It's from one of history's greatest thinkers, Greek historian and philosopher Thucydides. He said, “The bravest are surely those who have the clearest vision of what is before them, glory and danger alike, and yet notwithstanding, go out to meet it.”

So putting this in the context of the startup entrepreneurial journey, you know what lies before you, and that is risk, potential financial losses, internal turmoil caused by self doubt and the loneliness that is the startup journey, and a whole long list of other potential pain points; yet despite all of that, you go for it anyway.

Related: Why Now Is As Good A Time As Ever To Be An Entrepreneur

It's not just startup fear

So far I have only spoken about the fear of failure in terms of “taking the plunge” and launching your own startup. However, that is far from the only time in the business lifecycle when fear presents itself. Even once past the most difficult startup phases, fear has the potential to hold business leaders back from pursuing opportunity and keeping the focus on growth (which is what the focus must always be on).

When we get caught in a spiral of fear –the worry of losing clients because it would lead to tremendous financial strain and ultimately the demise of your business (or something of that paranoid mindset)– it becomes difficult to initiate decisions that are needed to keep your company moving forward.

For the entrepreneur constrained by this type of fear, what is actually happening is that decisions taken tend to be those that are designed to protect the company from failure which could result from "endless hypothetical scenarios of doom," many of which simply exist in the individual's mind. Rather than keeping the momentum up, fear essentially prompts the entrepreneur to batten down the hatches and try and stay safe and warm in that cozy little framework that seems to be paying the bills alright for now.

Be clear: that is when fear is now at a dangerous level, because trying to maintain a certain size of company, or a revenue flow that for now matches up nicely with your costs, is in fact the enemy of progress. If you are not moving forward, you will eventually start to move backwards. And that is something to fear far more than the "what if" scenarios that could result from taking those measured risks which are intended to keep the company expanding.

Understanding the science behind fear sometimes helps put things in perspective. According to research by England’s Ashridge Business School, when we are faced with a situation that frightens us or we feel we are unable to deal with, our bodies’ stress hormones launch a sympathetic nervous response. To escape the perceived threat we are under, the “flight” response causes blood to flow away from the brain and into the limbs, which causes our cognitive function to close down.

Translate this to the life of the entrepreneur who on the bigger scale is letting fear get the better of him or her, and we see the opposite of what our friend Thucydides above is saying about the brave. That is, if we are not going out to meet the challenges in business because we are not brave enough to power through the fear, we will always be taking those "safe" decisions, which are not in line with the ambition and aspiration the startup founder once had.

You see where I am going with this: essentially, those who succeed are more often the ones that can very plainly see the fear. Sure, they are affected by it, and they suffer a bit (or at times a lot) because of it, but again from our philosopher's quote above: they go out to "meet the glory and the danger alike" as they work towards their goal of success.

Related: You Have Nothing To Lose (And Everything To Gain) By Putting Yourself Out There 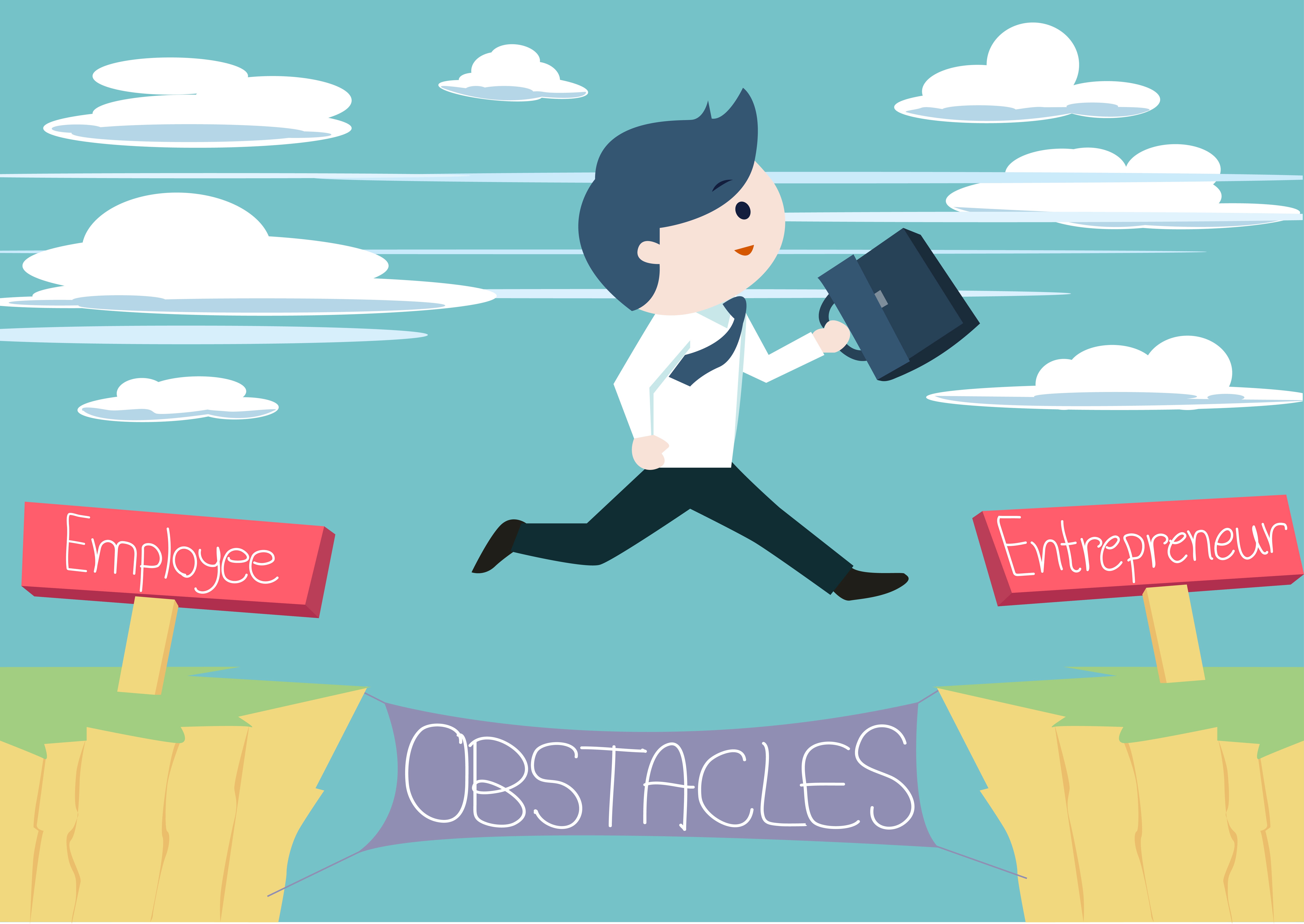 So how do we go about managing fear? Well, we start by acknowledging that it is an emotion we cannot escape, and that it is not actually about eliminating fear, but as I have stressed above, about moving forward despite it.

Now after this acknowledgment that we cannot escape fear comes a rather hard and cold fact in business: more than simply believing that what you are building is going to fill a real need in the marketplace and that you have the necessary skill set, it has to be an actual reality. It simply needs to be fact that there is that need and that you can realize it. Because you can’t "fool" yourself into thinking you have a winner and are capable of delivering. It simply has to be so.

Have you ever seen the intense focus of a champion boxer before a big match? He knows he's going to get hit. He knows his opponent is a strong adversary. But the champ has prepared himself through training and studying his opponent's past fights, and so he has done what he needs to do. The fear is there –fully– but he is prepared for the task at hand. So fear be damned.

For the entrepreneur then it is the same: preparation through having researched and studied the markets and the needs, and through having built a product or service that is well thought out and well developed –and that will continue to be developed as part of the daily effort– is what will make you successful and allow you to stare fear in the face. And even help you stare it down. And personal development is a massive part in all this as well. If you want to be fit for the fight of establishing and growing a business, you have to improve yourself constantly.

You have to refine existing skills and look for new skills to learn and refine. Don't ever think you are "there" (that you have arrived, that is) because there is no "there."

Fear as a force for good

And there is yet another way to look at all of this. In his book, Originals: How Non-Conformists Move the World, Adam Grant spoke to Twitter CEO Jack Dorsey, Google CEO Larry Page and entrepreneurial heavyweight Elon Musk –among many others– to get their take on fear and the effect it can have on business success. What he found was that these heavyweights all had a very big fear of their own– and that was the fear of not going for it in the first place. Of not trying.

We can ultimately view fear from many different angles. It can be a motivator, it can be something that entirely stops you from going for it in the first place, and it can be something in between whereby you move forward with your entrepreneurial plans but are only going as far as waist deep in the water and so not giving yourself a real shot at realizing your full potential.

What is clear is that when fear gets in the way of something that it should not be getting in the way of, you need to recognize this, and you then need to come at the challenge from a different angle. As mentioned above, for the true entrepreneur it's not about focusing on the fear itself, but focusing on what is needed to win the fight, because fear or not, that brave entrepreneur knows the fight is going to happen regardless.

Related: Four Ways To Increase Your Confidence As An Entrepreneur

Every Day in Business Should Be Treated Like Super Bowl Sunday