By Richard Lawler March 24, 2016
This story originally appeared on Engadget

We've seen our share of GPS-guided mishaps, but what happened to the owners of a Texas duplex is particularly heartbreaking.

Their house was torn down by mistake (no, this isn't the first time that's happened, it's not even the first time in Texas) after it was damaged by a tornado, and the demolition company apparently blames Google Maps for the error. They lived at 7601 Calypso Dr., and as you can see below, on Google Maps it lists the same location for that address as it shows for 7601 Cousteau Dr. -- the home a block away that was supposed to be demolished. (At the time of this writing, both Apple Maps and Mapquest have what appears to be the correct listing for 7601 Cousteau Dr.) 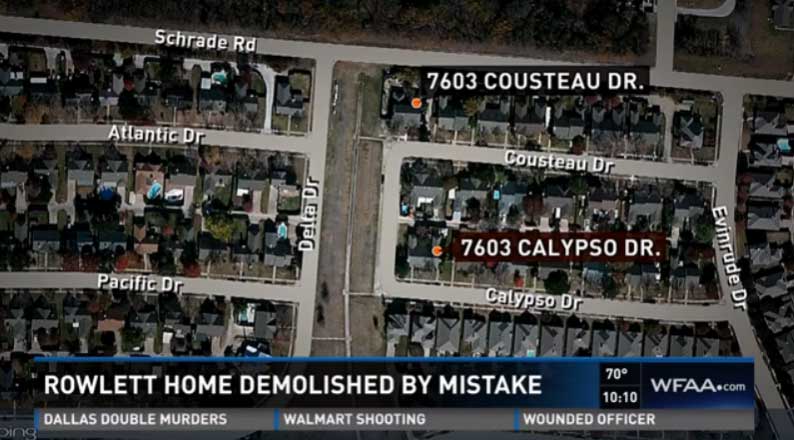 Homeowner Lindsey Diaz told KERA News that she had just applied for a builder's permit to repair and rebuild, before getting a call from her neighbor about what had happened. An employee for Billy L. Nabors Demolition, the company behind the teardown, apparently sent her a screenshot showing what Google Maps displays, but so far no one from the company has apologized for the mistake.

Despite years of development and crowd-sourced editing, the usually-excellent Google Maps still has occasional blind spots, and this shows that the consequences can be a bit more devastating than a missed delivery, or having to loop around the block an extra time. Of course, while a tornado-damaged neighborhood might not have enough street signs and house numbers left to make verification easy, you'd think it would be prudent to double check the location before getting started on work like this.

5 Leadership Mistakes That Can Break Your Company