Allyson Downey was a newly minted Columbia University MBA graduate when she landed a job in the wealth management department of Credit Suisse in New York City. She was, thanks to her previous professional experience raising money from billionaires in politics, doing extremely well right out of the gate. Her managers were praising her and she was on the verge of bringing in a major client. And then she got pregnant.

Downey, then 31, had spent years dealing with fertility issues, a struggle she wrote openly about in a post on Medium. Midway through the pregnancy, she had complications that required her to be off of her feet. Despite Downey’s strategic planning for a contingency plan such that she could continue to complete her work from home, Downey’s attempts to communicate with management were repeatedly ignored. When Downey did finally hear back from Credit Suisse, it was with a phone number for human resources. They would help her process her disability leave, she was told.

After having her baby, Downey took a job raising money for a nonprofit. It was mind-numbingly easy for her, and she got bored quickly. It was in that time when Downey was largely unstimulated professionally that she had the idea for weeSpring, a platform where new parents can find reviews of products from friends, peers and other trusted voices in their networks. Launched in Jan. 2013, Downey went through the Techstars program in the spring of 2013. The company is headquartered in Boulder, Colo., and her team of five are distributed across the country and work virtually. She doesn’t share revenue or profit figures, but says that weeSpring is indeed in the black. 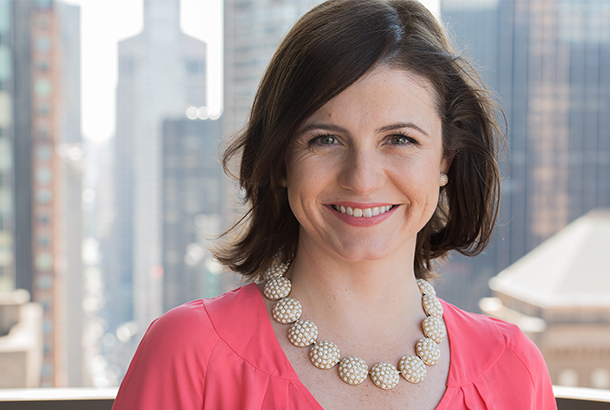 Downey is now 36 and has two children: Logan turns 5 in August and Caroline turns 2 in June.

Learning how to be both a business owner and a mom was not easy for Downey. Finding answers to her questions was often frustrating. “I was Googling, ‘pregnancy discrimination’ and finding these sketchy looking websites with blinking ‘Call now’ buttons, and that was the extent of what I was able to find out,” Downey says during a phone conversation with Entrepreneur.

So Downey set out to write the book that she wished had been there for her. The result, launching today, is Here’s The Plan. Your Practical, Tactical Guide to Advancing Your Career During Pregnancy and Parenting (Seal Press). For the book, Downey interviewed nearly 75 professional moms and culled through survey data. It’s a comprehensive, straight-shooting guide to all of the questions that new moms are too afraid to ask or too naive to even know they need to ask. 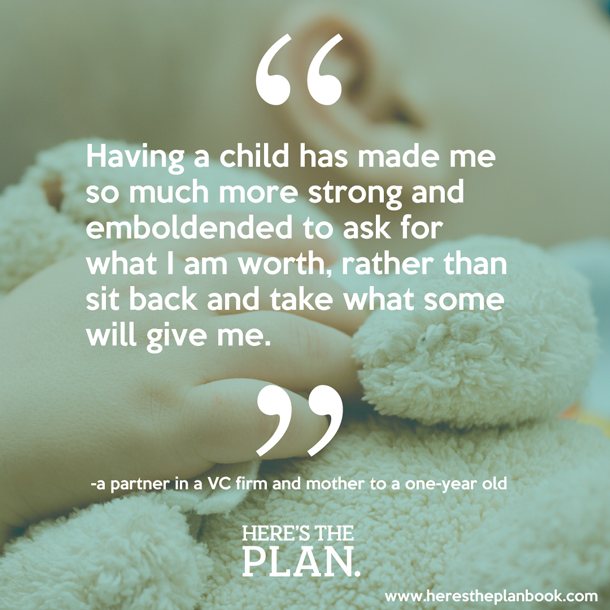 Here are five of the lessons that Downey learned from her own experience and research.

1. Speak up and communicate clearly about what you want.

Often, colleagues and managers make assumptions about what they think a pregnant woman or new mom prefers. While their intentions may be good, they may inadvertently be short circuiting a woman’s professional ambitions. Downey calls this “benevolent discrimination.” Whether you want to work from home part time or you want to be sure your boss knows that you still want that promotion even though you have just had a baby, Downey says that women need to be ready to communicate often and clearly.

“We tend to assume that people know what we are thinking and very rarely do they actually know what we are thinking,” she says. “The onus really is on the woman to be crystal clear and vocal.” She recommends women set quarterly reminders for themselves to proactively communicate with managers both what they want to do and how they will accomplish their goals.

2. Build up your network.

It’s always important to develop your contact list, but it’s especially important to keep the networking going when a woman is pregnant, on maternity leave or taking care of young children. “It’s often one of the first things to go when they are having children because they think that they don’t have time anymore to go out and go to networking cocktail events or show up for an industry breakfast,” says Downey. Men, however, don’t have the same compulsions.

Don’t forget to lean on partners and caregivers so that you can attend those professional mixers, advises Downey. Also, there are ways to network from your computer, too, she says. Proactively make email connections that don’t necessarily have an immediate impact. “Finding those ways to be helpful and constructive of two people with one introduction is going to get you those favors in the favor bank that, even without you having to go proactively cash in on them, wind up coming back to you,” says Downey. You get the benefits of networking without having to put in the face-to-face time.

You can’t be everywhere at once. Pay people to do things for you. Instacart your grocery delivery, drop off your laundry and TaskRabbit the rest of your chore list. Take your annual salary and reverse engineer your hourly rate and when you can afford it, pay people to have tasks done that are less than what you make per hour.

4. Create a paper trail of your achievements.

This isn’t just in case you find yourself the victim of pregnancy discrimination, either. Women need to keep a “dossier of their successes,” says Downey. Every Friday afternoon, take 15 minutes to document your successes. Put in writing conversations that commend your work. That way, when it’s time for you to meet with your manager for a review, you have a detailed list of everything that you have done well.

5. Change the way you think about having kids and a career.

You can’t be both leading a meeting in the board room and changing your baby’s diaper in the nursery at the same time. So switch how you feel about that reality. “Everyone feels torn all the time. I do not know anyone who doesn’t suffer from working mom guilt. That is an absolute truism. And I don’t know anyone who does not experience that,” says Downey.