By Rustam Singh May 20, 2016
Opinions expressed by Entrepreneur contributors are their own.
You're reading Entrepreneur India, an international franchise of Entrepreneur Media.

The eternal debate between being an Apple user or a Windows users never seems to run out on any web forum you stumble upon, even if the original post isn’t anywhere related to the same. Sure, Windows were the first to bring the concept of a “Personal Computer” into our heads, and make it look like a necessary device for every household. Apple however, adopted a completely different approach to marketing and supposedly improvised on the same and made a functional device having emotional attachments to it, even though it virtually restricts everything that is possible to change in it, including hardware as well software. A simple statement settles the debate between Apple & Microsoft – Apple’s devices are for those that couldn’t be less bothered to know or modify the way things work, they just use their device to perform a task with ease without knowing the technical trouble shooting or complex processes of fixing things. Microsoft on the other hand, is for people who like to be in control of every element there is, do not mind going through some hops to perform tasks just so that they are happy to know they are aware of how it goes. Linux users, on the other hand, are a completely different ball game, for those advance users which want to break down the level of control to a world where anything is possible, and anything can be customized and runs on open source.

Macbooks are popular not just for the image of expressing success, but also faster processing and efficient, straight to the point functioning. Unfortunately, this smooth transitions and processing come at the cost of extremely restrictive hardware which takes ordeals to upgrade. Try taking your Mac to an Apple Store and see the process for services they offer – some can be as high as 50% of the entire device’s cost itself! In countries such as India where official Apple stores are in the progress of being setup, you’re left with very limited options and users are forced to upgrade for something as trivial as storage space – the same being a 5 minute job on a Windows machine. Apple is expected to launch its first official store in India by 2017, and those third party officially recognized stores can be a little fishy sometimes. But fear no more, OWC’s recent announcement of launching a third party SSD upgrade now means there’s no Apple laptop left on the planet that cannot be upgraded.

As someone who loves the build of an Apple’s device but violently hate its OS, this is perfect. With the ability to convert your existing SSD into an external one using the casing provided, it makes a great device to upgrade. I’ve been using the upgraded 1TB SSD for over a week now, and I’m happy to report I don’t see a logical reason to upgrade anything else in my machine for at least the next 2-3 years (unless there comes a software that changes the game completely, but I doubt my regular usage of sound, image & video processing need an upgrade yet). The drive is significantly faster, and 1TB means I don’t have to carry an annoying external rive everywhere I go. Nor do I have to shell phenomenal amounts of money to buy a completely new Macbook Pro. The plus side is that in India, resale of used goods is high, so even if a year later I feel like upgrading my machine, I am to expect a good return rate of my SSD. If not, the enclosed casing would prove in handy to be a phenomenally fast external SSD. It’s a win-win!

Read more about the launch by clicking here.

Here are the step by step DIY instructions to upgrade your SSD at home, without using any other support. I performed it on my MacBookPro12,1 but there are similar options available for other devices as well. I am using OWC SSD 1Tb in the same. Save money and have the assurance of no third party fiddling with your precious machine without your consent. 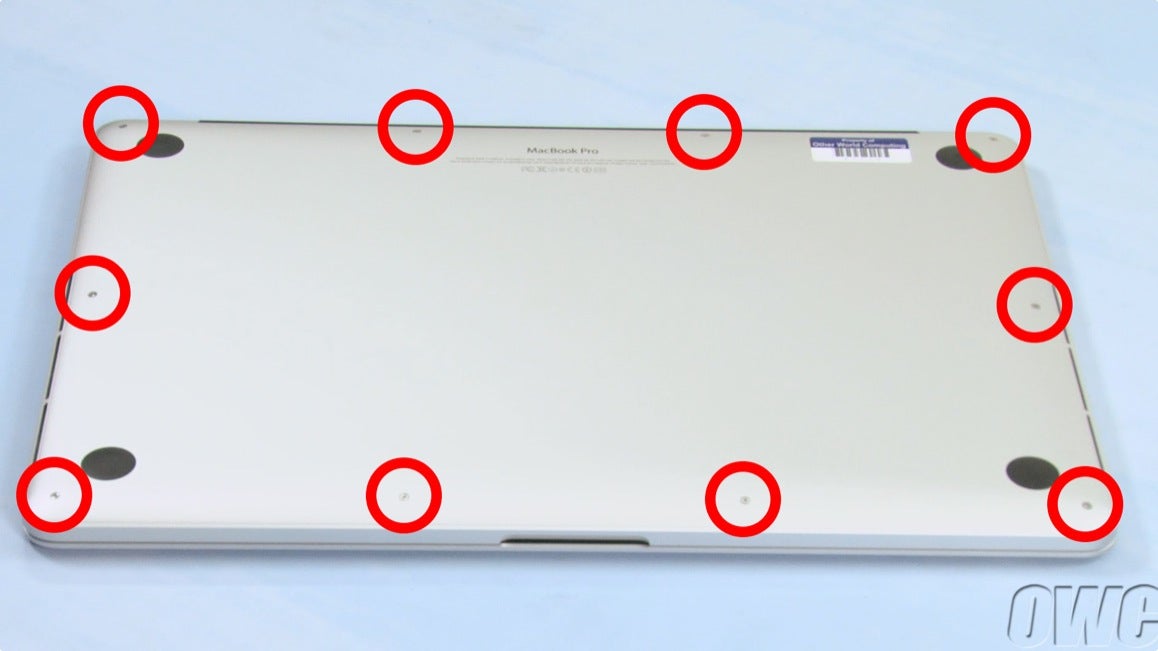 Turn your Macbook off and slip it upset down. A good idea is to place it on a neutral surface, such a rubber mat. I didn’t have one when I upgraded, so I utilized a new rubber foot mat instead. Notice there are ten really tiny screws in the back at all corners. Unscrew them using an appropriate screwdriver (don’t improvise here with the sharp end of a knife or something similar or you risk wearing the edges off and rendering an unusable screw). Gently remove the back panel. 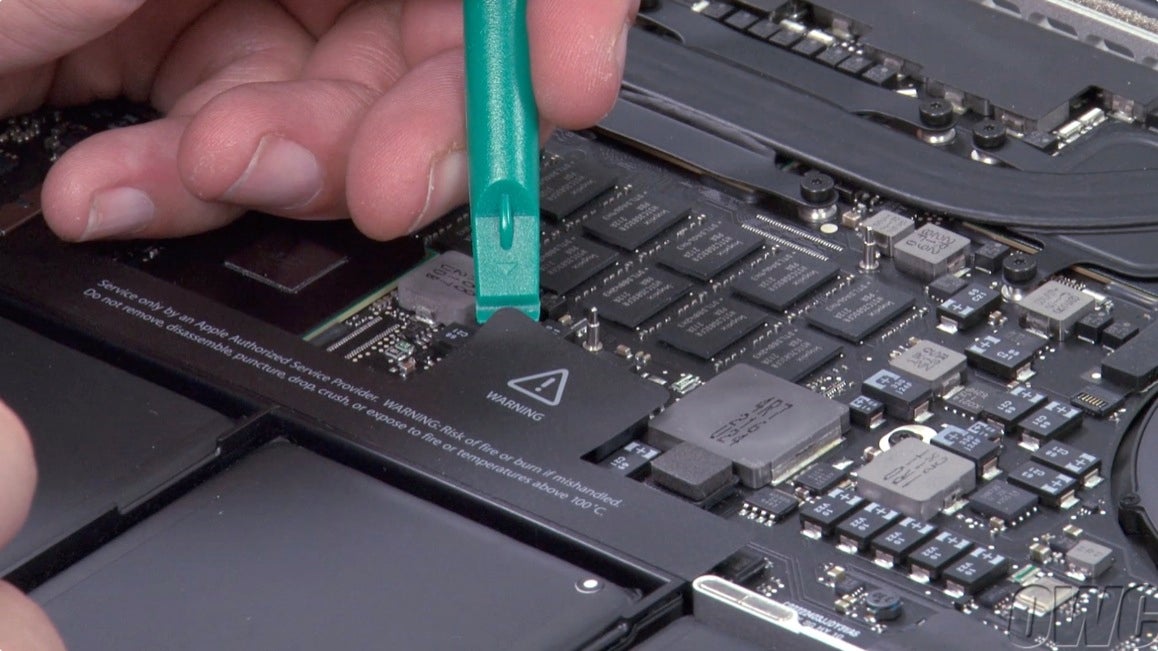 irst, disconnect the battery by gently lifting up on the tab that covers the battery connecter, then detach the connector using a nylon pry tool. Or your finger nail, if you’re really, really, really careful (not recommended for safety purposes). This isn’t technically required, but is always a good idea. 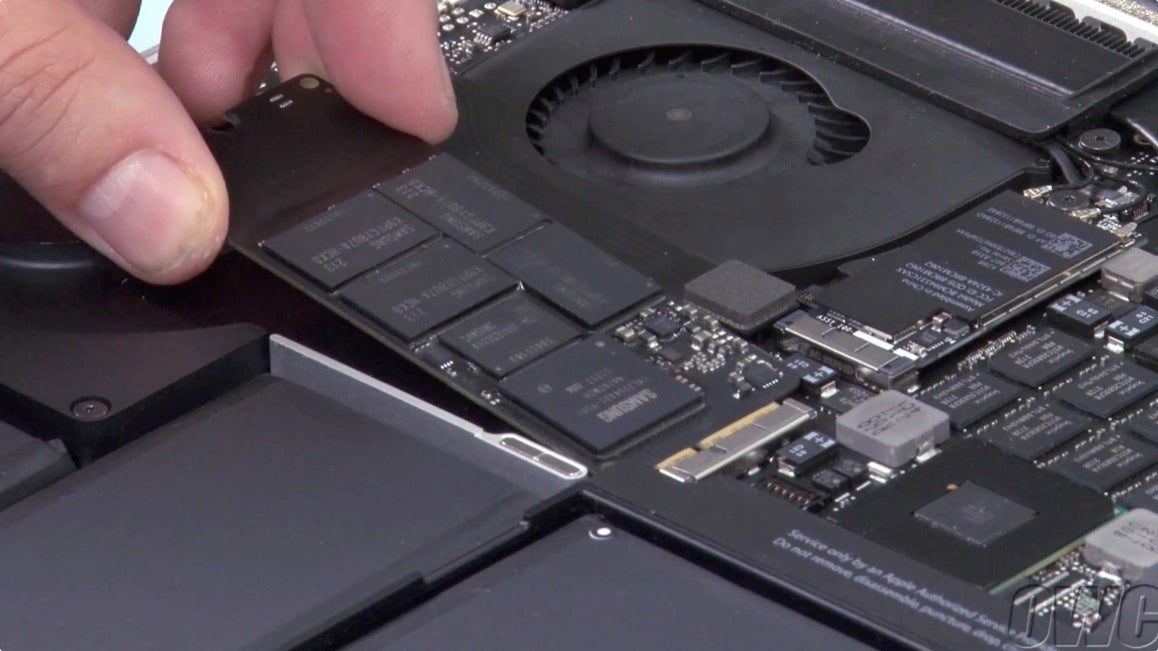 To remove the drive, first remove the single Torx T5 screw holding it in place.

Remove the drive very gently.  Just lift slightly and carefully slide it out of its socket and set it aside. If it’s resisting too much, do not tug and blow some air on it to see if dust is stopping it. 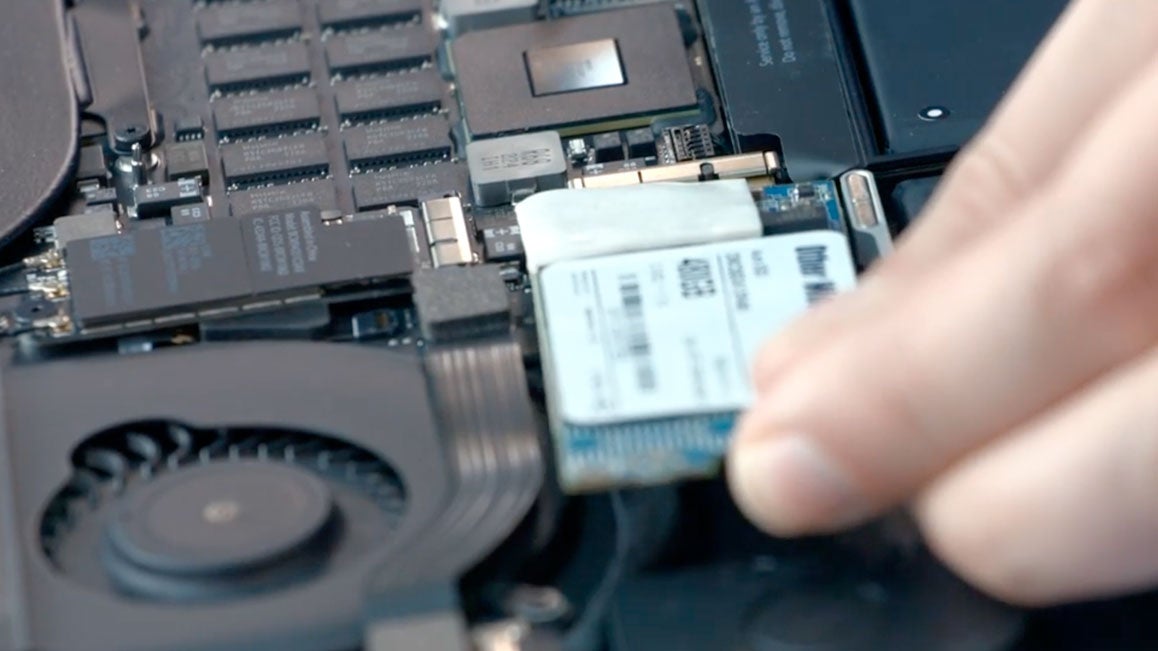 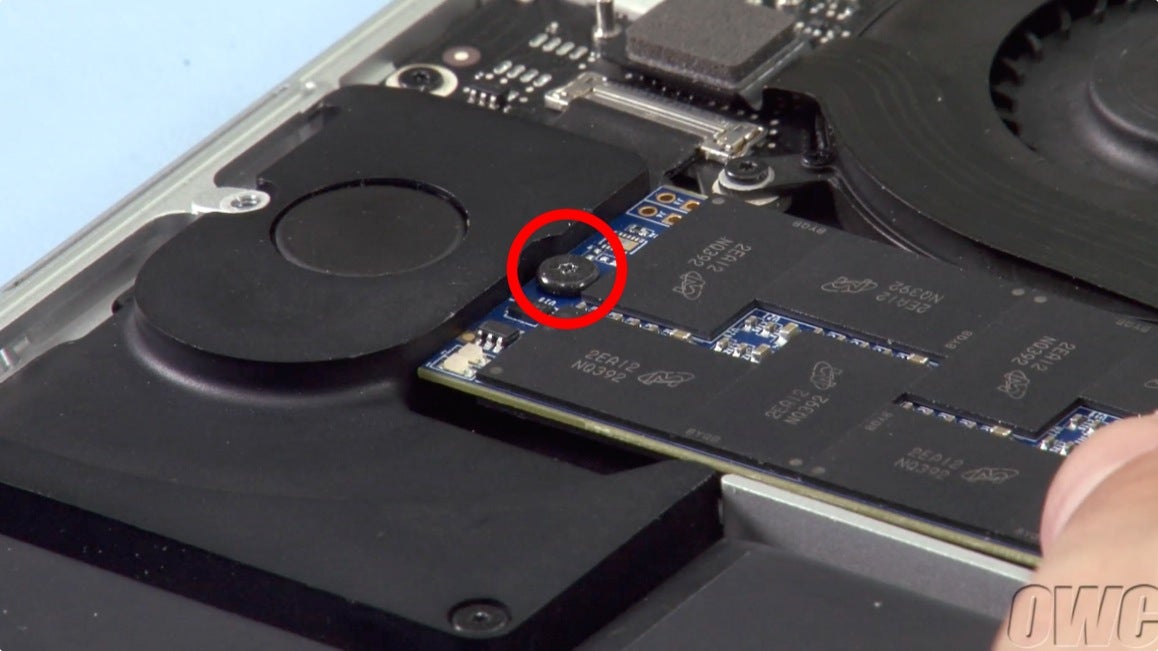 Secure the drive in the bay using the Torx T5 screw that was removed earlier. Don’t screw with unnecessarily stronger force expecting to do any good, you might end up wearing off the screw socket itself. Just enough that it doesn’t move further should be good. 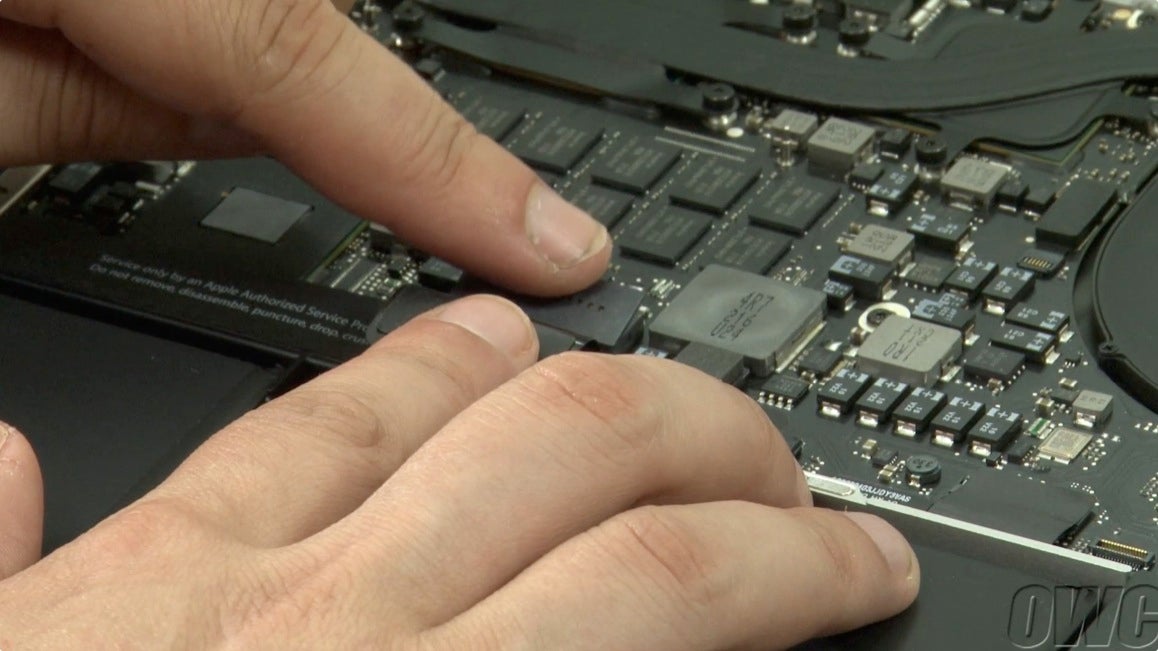 Reconnect the battery by gently pushing the connector back into its socket and then covering it with the tab. 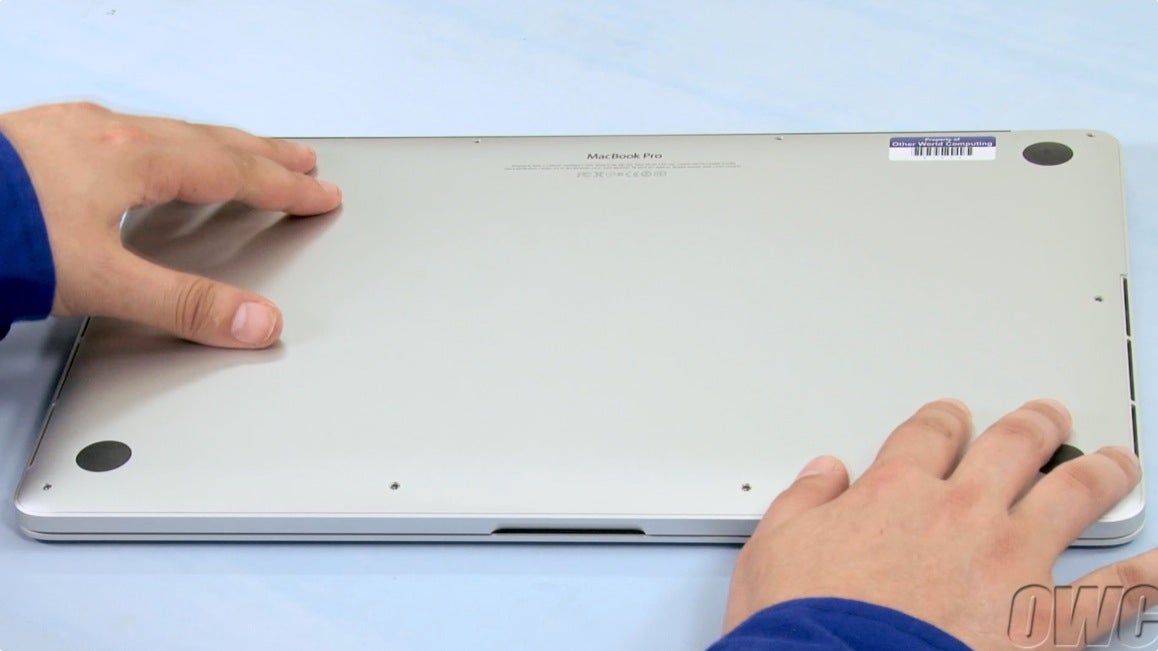 Once the new drive is installed, replace the bottom cover and screw all the screws back in place. The top ones are larger, so it’s easier to spot them. 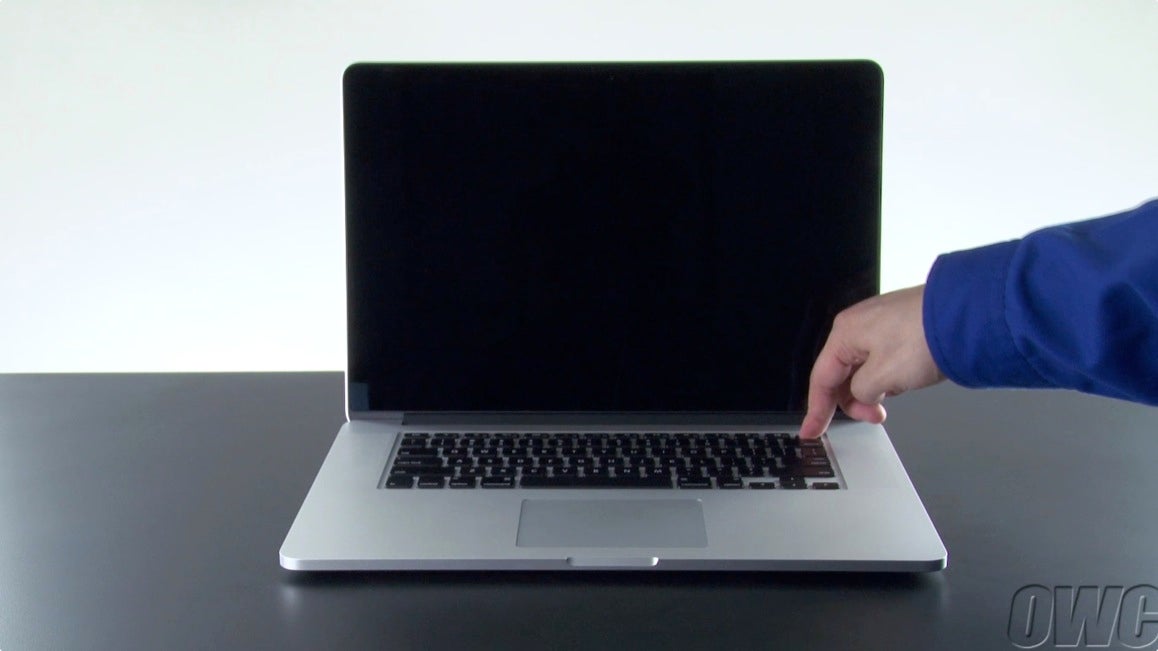 Gloat in the glory of having a massive SSD upgrade and doing the job yourself! That’s it! You’ve virtually saved at least a 1000 or more rupees from a third party installation guy (if you’re trying to upgrade in India) and know for a fact there’s no damage done to your previous machine. In the absence of an official Apple Store as of right now in India, this simple DIY guide will provide handy. Learn how to transfer data to your new drive by clicking here.

Have you tried to tinker with your Macbook before or perform an upgrade on your own? Let us know in the comments on our official Facebook page Entrepreneur India