By Rahul Agarwal July 12, 2016
Opinions expressed by Entrepreneur contributors are their own.
You're reading Entrepreneur India, an international franchise of Entrepreneur Media.

Did I just say that businesses value something more than money?

How is that even possible? Aren’t businesses all about making money (and maybe solving an unsolved problem in the process)? 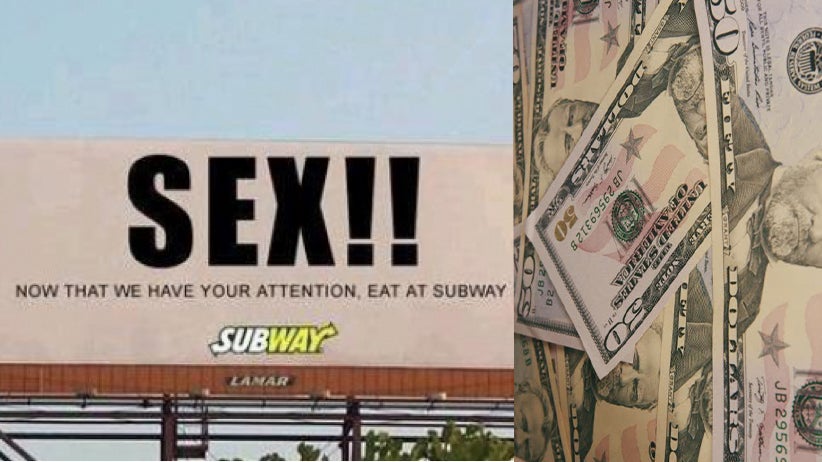 Let me illustrate- In the image above, did you look at the billboard that starts with SEX!! Or did you pay more attention to the dollar bills? In fact did you even notice that they are 50 dollar bills.

Because of hyper-consumerism, today we have  so many options in everything from the kinds of fish available in the super-market to the seemingly endless choices in electronics and gadgets. Leaving us totally clueless about what to buy. But this makes situations even worse for business owners and especially marketers in cut-throat competition. Leaving them with no options but to bombard as many ads at us as they can manage within their budgets.

Trying to play the game ‘I can shout louder and for longer’. In fact one study in 2014 suggested that an average adult spent almost 10 hours a day consuming media and being exposed to 362 ads from TV, radio, Internet, newspapers and magazines alone. That’s 18 times of an average adult smiles per day (only if all the ads made us smile we’d be so much happier). The sheer volume at which we are being marketed to has even inspired the creation of movies like ‘The greatest movie ever sold’.

Where does so many ads leave us as normal human beings?

Do whatever, I don’t care

We can not possibly register let alone remember 360 ads per day with new ones popping at us every single day. Now that you know that you were hit by 360 ads yesterday how many can you remember. Turns out our brain has a very efficient shortcut to deal with ads, it’s called ‘ignorance’.

We know what ads are usually like and so when we come across one we go, “Swithched off mode, am I here for ads? Hell no.” And that makes your job as a marketer ‘painful’ because now you have to make sure that along with conveying your marketing message your ad is interesting enough for people to actually notice it.

Do marketers know how to make you care?

There has to be a solution right? How else would businesses survive?

Turns out there is, and it’s pretty simple, to put the ads in a way or at places that people don’t expect ads.

But, why and how would that work?

Simple, from our past experiences we know the pattern of places and ways that companies advertise to us, The glossy image on the billboard, the hoarding, the commercial breaks.

Therefore we know it’s an ad, even before we actually look at the billboard. So we turn a blind eye to it. Because  billboards are always filled with ads and no one wants ads. But what if you zoomed across the billboard in the cover image of this article? This does not seem like an ad, what kind of billboard is that? You decide to actually consciously look at it, and heck it’s an ad.

But you actually looked at it. Voila! The marketer has won .

How my spare tire cover won us the battle for attention

At ButterlyYours we launched our first product at The Bhasad Day Planner on crowd funding platform with an aim of raising funds for production of a meagre 300 units.

The product, what we were trying to sell.

It’s a useful Day Planner with the 4 quadrants of Stephen R.Covey. But the way each quadrant is titled with a funny and popular slang that makes it a gem(especially for the north Indians).

Here’s how it looks 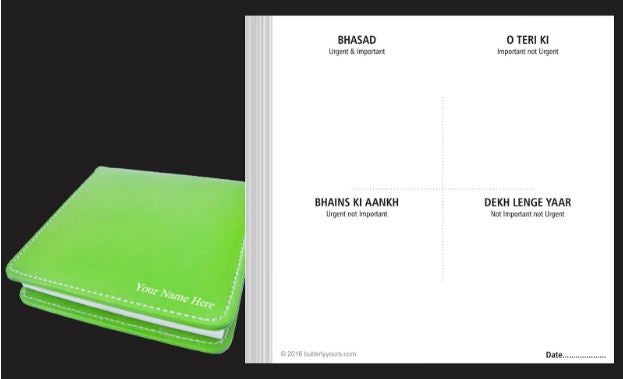 And honestly it’s nothing like anything else out there, because no one really thought that slangs on a day planner (something that civilised professionals use) would work, but we thought, planning is boring so if we can make it funny, maybe people will buy it.

But the pad wasn't selling on it’s own even though people liked it so we took feedback and improvised further to create customizable, premium quality faux; leather casing in multiple colors for the writing pad.

And now with the premium quality of the casing in 4 colors, customisation the slangs and the 4 quadrants combined together was definitely salable, in fact any youngster or middle aged professional who saw it asked, how much are you selling this for? Well we are not. Not yet. It’s on crowdfunding though.

But we weren’t gonna  find 300 people to buy it in our circles so we started marketing, tried Facebook ads, Google ads even a billboard but nothing seemed to generate any buzz even after spending so much money. Even though The Bhasad Planner starts spinning it’s magic after people actually see it, But the biggest challenge for us was to get people to stop and look at it for 5 seconds and actually try to understand what it is. And after 9 days of frustration we came up with this idea. 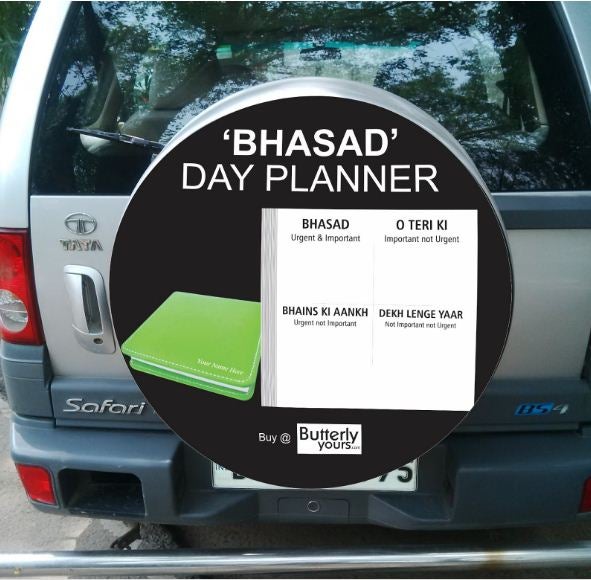 That’s the planner on the stepney of my car.
And by spending just 40 bucks (INR) for thee poster 6 or 7 people have already stopped me to ask about it in the last 2 days.