By Erika Widen October 11, 2016
Opinions expressed by Entrepreneur contributors are their own.
You're reading Entrepreneur Middle East, an international franchise of Entrepreneur Media.

Launched in 2014 with a market offering of video production, animation branding and design, the founders of Ozone Studios are brothers Mazen and Mohammad Blal, and Ahmed Badr El-Din. "Mohamed and I have always had common interests, but each of us only managed to pursue our passion through freelancing. There was only room for us to practise it as a hobby. Once we decided to devote ourselves to what we love, we thought, "Why not take it to the next level and start our very own business?' It was when we realized there was a gap in the market in keeping up with its tremendously demanding trends. Hence, Ozone Studios came together as the fresh invigorating start for both of us in our attempt to follow the unconventional, and take the lead to a new movement in digital advertising," explains Mazen.

"Besides working mainly with entities within Qatar, which strive for the 2030 vision, we help and encourage small medium enterprises to grow, and also advocate in-house production." Blal adds how the market in Qatar is skyrocketing and there are not enough companies at the moment to meet the need. "Our competitive edge is that we understand the local culture and tailor new and unaccustomed approaches to suit what businesses are searching to achieve." The founder says that they saw potential for their business in Qatar, as most production agencies operating there tend to stick to traditional approaches. As a result, the same pattern of production tends to repeat itself within the country's small business communications market; "leaving little space for competition between us and the rest of the agencies in the field, and a lot of room for opportunity." 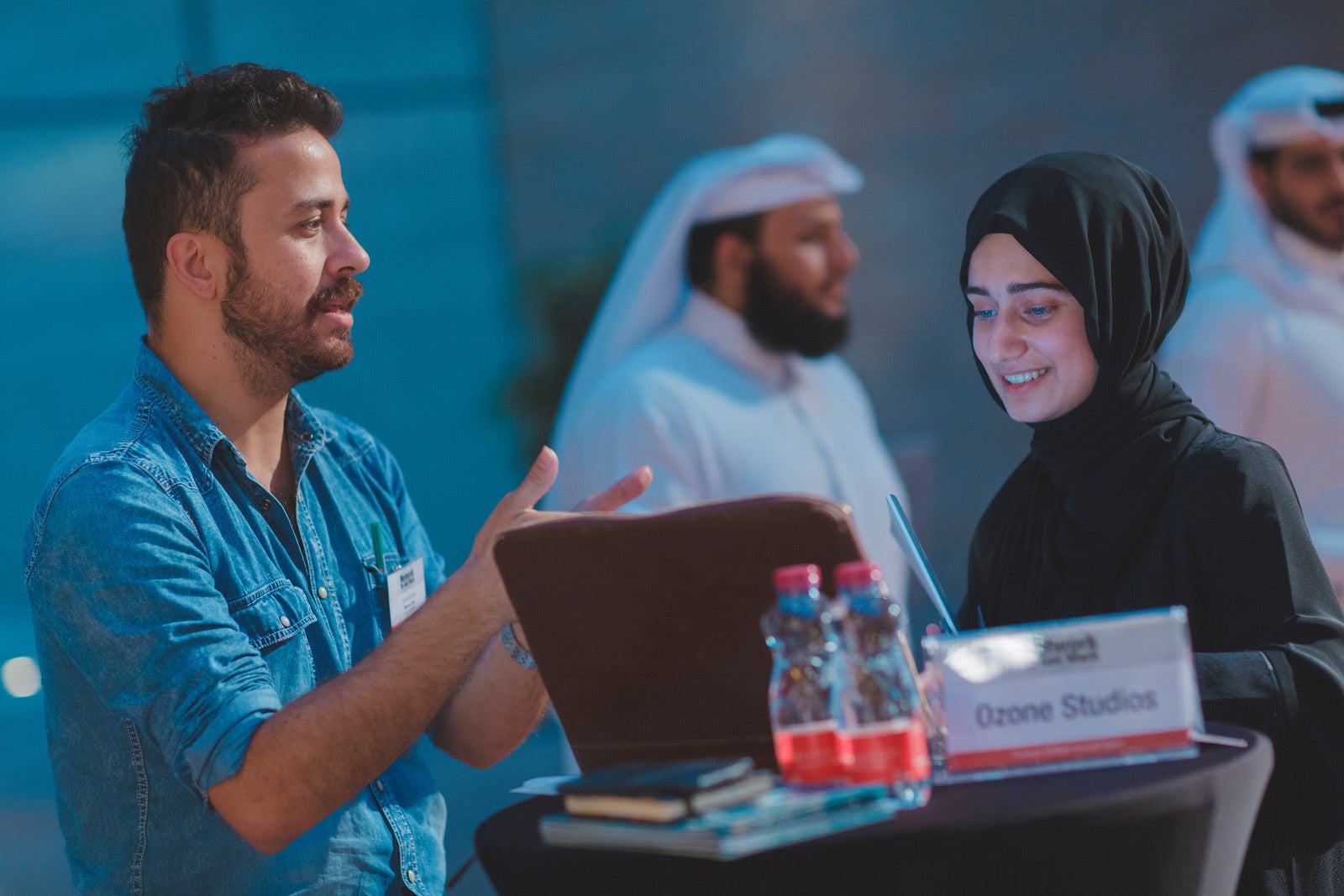 Ozone Studios co-founder Mazen Blal at an event.Image credit: Ozone Studios.
Some of the hurdles they faced prior to setting up Ozone Studios was how as a new venture, they were confronted with the difficulty of gaining credibility from clients who have more faith and trust in established corporations. "Introducing new approaches to our market also required persuasiveness, as our prospects need to believe that the newly-introduced advancements would work. It was tough getting through that phase, but now, our clients [find] appeal in our unique elements," says Blal. In less than two years, Ozone Studios has successfully attracted high profile clients including Qatar Foundation, Oryx GTL and ictQATAR to name a few. "Proudly, Ozone Studios became an award winning creative agency that managed to succeed in its field at a pace that marched quicker than expected." The company has marketed itself by adding familiarity to otherwise mostly rigid and corporate concepts, which has allowed Ozone Studios to build a more personal connection with their clients. "What we do best is provide high quality media production and branding elements to our clients in ways that follow the global standards of media advertising."

Blal further adds how after one year of operations, Ozone Studios became an entirely in-house media production agency, and since then unveiled two initiatives, Qatar Infographics and Ozone Kids. Qatar Infographics is outlined to be a sub-brand of Ozone Studios. "We started this initiative because infographic search volumes have increased by more than 800% in just over two years, and that makes it a wave worth catching and a potential worth investing in." The company's other vertical, Ozone Kids, centers on developing children's content. This idea was formed when the founders pitched their idea for a children's magazine of Education Above All, a subsidiary of the Qatar Foundation. "Inaugurated at the prestigious WISE Initiative conference, we are pleased to say our magazine was a resounding success," says Blal. At present, Ozone Studios is aiming to create video productions content for Arab speakers around the world, starring children between the ages of five and twelve. "While the Arabic television industry has expanded by leaps and bounds in the last decade, there is a severe lack of original Arabic content produced for children in the region." Ozone Kids thus plans to make its mark in the world of children's entertainment by creating innovative videos starring children from across the world and showcasing their unique perspectives and talents. "By picking themes for both their relevance and entertainment value, our videos will provide children with an amusing yet educational way to engage with the world around them."

Related: Qatar-Based Metis Is All About Empowering Students In Their Academic Journeys