A routine Friday like any other was thrown out of gear for internet users in the US and parts of Europe in October when hackers disrupted access to some of the world’s best known and widely used websites such as Twitter, Netflix, PayPal and others. The fact that the outage seemed to have been initiated with simple internet- connected devices made it all the more astonishing. Hardly a day goes by without an alert of a new breach in the cyber world, and the issue is turning more real with cyber security finding a top spot on any CIO’s agenda.

Matt Suiche, founder of the UAE-based Comae Technologies, explains the importance of digital security by drawing attention to the testimony delivered in 1998 by hacker group L0pht to a panel of senators in America. L0pht spoke about how unsafe the use of computers were, and how easy it was for anyone to cause disruptions with it. “Now, almost 20 years later, the risk is still present and almost nothing has changed, even though we [have] witnessed different cycles of innovation,” Suiche says. It is this need for advanced digital forensics capabilities in today’s “smart” world that led Suiche to the UAE in early 2016 to create a forensic product for law enforcement and enterprises to investigate cyber incidents.

Suiche’s interest in the field goes back to his teenage years- reverse engineering Windows kernel (a close-sourced memory management tool) and figuring out ways to extract information on user and system activity was something Suiche took on as a challenge then. Cracking the process in just a couple of months, Suiche started presenting his insights at industry conferences, and went on to work at The Netherlands Forensics Institute. Suiche became an entrepreneur in 2011 when he started CloudVolumes, an application virtualization company, which he subsequently sold to US-based software company VMware. Suiche’s current enterprise, Comae, aims to assist investigators and incident response teams in the process of managing a cyber-attack. “Every company or government entity gets hacked, including the National Security Agency (NSA) and companies like Google,” Suiche notes. “Nobody wants to be the last one to know about their own breach, especially not in the news.” 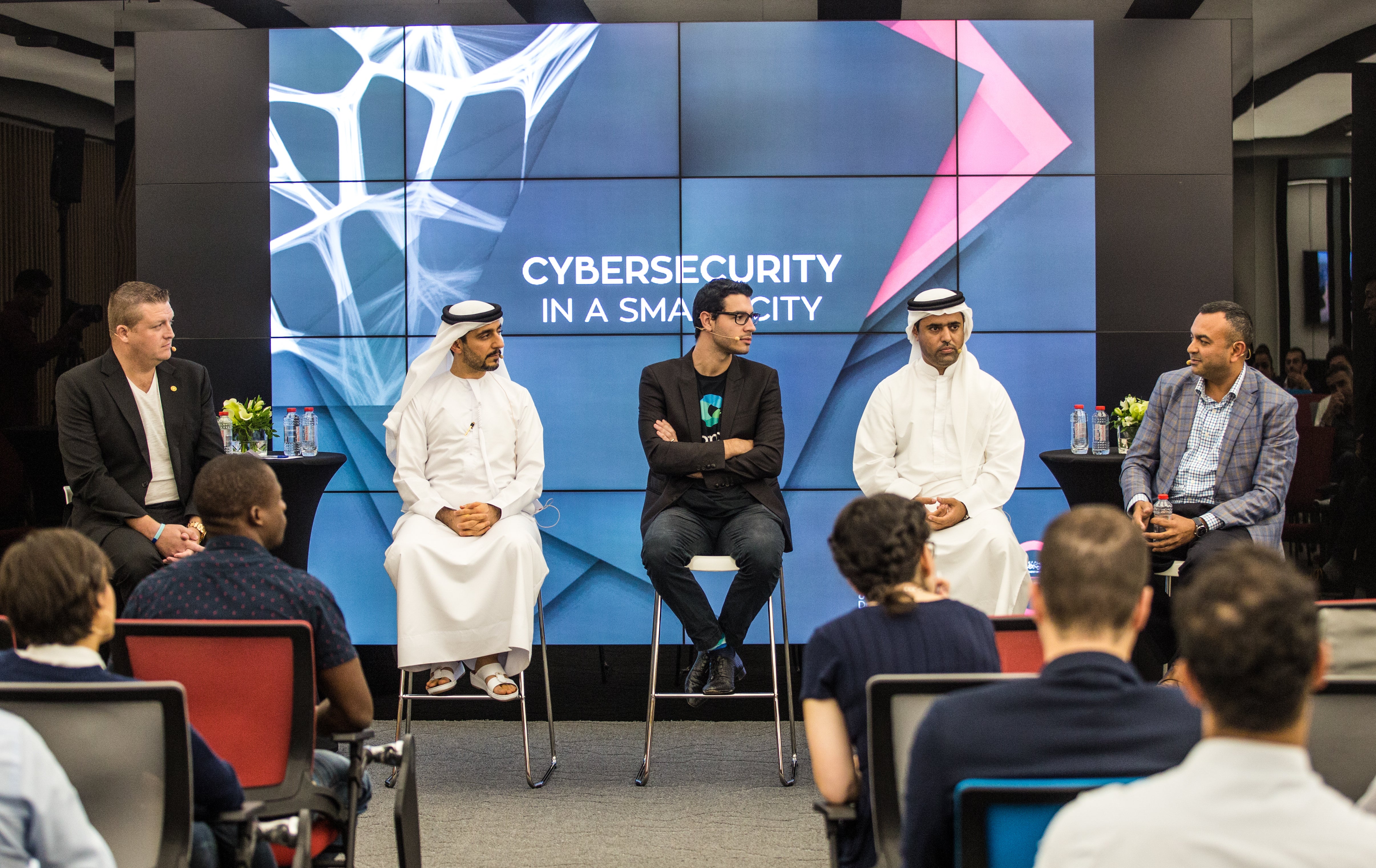 Comae thus works on developing endpoint detection and response software that will help identify threats in both law enforcement and enterprise settings. While law enforcement agencies can monitor system activities and gather memory data using its digital forensic capabilities, enterprises can use Comae’s products to understand the entire trail of how a cyber-attack occurred and mitigate the damage. Comae has another segment as well, which focuses on advisory services thereby functioning as an “active discovery” for its developing products. Given that the enterprise is still finding its feet in the MENA market, it recently launched a range of free cyber security tools on its website, which was aimed at “raising the profile of Comae as a company and leader in cyber security technology.” The strategy seems to have paid off- Suiche reveals that the company saw 1,000 downloads of its offerings after only a few weeks.

As an entrepreneur who moved from San Francisco to Dubai, Suiche often gets the question of why he moved from Silicon Valley to here: “I often joke that I moved here for the hummus,” he quips. On a serious note, he explains that thinking out of the box and having a vision are both important for entrepreneurs, and the UAE ecosystem supports that kind of thinking. “It is also a great hub, and the vision of H.H. Sheikh Mohammed Bin Rashid Al Maktoum is remarkable- you can feel the positive changes every day.”

This is perhaps why Comae was quick to apply for the Dubai Future Accelerators (DFA) program, a Dubai government initiative that pairs selected innovative enterprises with government bodies to make governance hi-tech. DFA picked 30 companies from over 2000 applicants, and Comae was selected to collaborate with Dubai Police in tackling cyber investigations. Speaking about the benefits for Comae in being part of DFA, Suiche says, “As a business, it means sitting down with relevant actors and potential clients, and developing a long-term strategy and partnership to solve global challenges.” And Comae’s efforts to gain visibility are already bearing fruits. Comae Technologies and Dubai Police recently signed a partnership to focus on AI-based memory forensics analysis solutions. The agreement goes beyond the 12-week DFA program, and as Suiche puts it, Comae is building a relationship “where we want to set a standard in terms of law enforcement technologies in the region and globally.” Suiche adds that working with Dubai Police at DFA has been smooth sailing as well. “I was lucky they knew about my prior work even before the program, so both parties are really excited about this collaboration,” he says. “From the daily operations at the Dubai Future Accelerators, to the Chief Commander, everybody has been very helpful and motivated on making this agreement happening- everybody is very pleased by how fast we are moving.”

Entrepreneurs working on new solutions for safety of cyber space often face hurdles associated with a dense and saturated market, making it difficult for startups to capture industry or investor interest. According to a 2016 CB Insights study on investment trends in cyber security, even as five out of the nine “unicorns in cyber security” reached more than US$1 billion valuations in 2015, and though the category is still considered “hot,” funding has since slowed down. The Middle East market is no different, with large investments in this space being rare. However, Suiche believes that given the “ambitions of the country” and tendency to rapidly adopt advanced tech, “heavy investment in cyber security including R&D, products and solutions” are likely over the next five years. And will Comae vie for this funding? Suiche says there are no plans to “do any funding rounds at the moment,” and agrees with the view that, while capital is key to develop products, smart money, which comes with investors who are seasoned entrepreneurs and great advisors, is better.

In terms of challenges for his enterprise, Suiche declares access to talent as being his biggest issue. “I initially thought this would only be a problem for Windows kernel developers, but this also seemed to be a problem for full stack developers,” he says. While Comae’s team of four may come across as small in conventional terms, the startup does have the benefit of having global partners, with Suiche believing that “talent is borderless” in a digital world. I ask Suiche if a program such as DFA, which has global enterprises working alongside regional startups, helps bridge such ecosystem gaps, and he agrees that potential collaborations can keep the community “running and evolving.” As for Dubai’s entrepreneurial ecosystem itself, Suiche predicts a change in the startups it produces very soon. “The model where successful startups in the region just had to replicate existing models in e-commerce, etc. is coming to an end,” Suiche says. “Dubai is entering in a new cycle, where innovative solutions will emerge from here.”

What are your tips for entrepreneurs looking to start a business in Dubai?

“Make sure to find a free zone that will not bug you with problems from the last century (like not matching signatures), and that delivers quickly. Also, look for a good attorney to draft contracts for you. [In your enterprise], do not dismiss the technical aspect of what you do, or leave it to someone else, especially if you are a student, and you are thinking about starting your own business. Software engineering became its own culture in places like Seattle or the Bay Area for a [lot of] reasons; this provides you a very powerful framework to identify and resolve problems.”

In terms of ecosystem, how would you compare Dubai to San Francisco?

“From the way I looked at the Bay Area and San Francisco, it had several limitations as a city, and as an ecosystem, the monoculture, the poor quality of life, the outdated airport. As an ecosystem, Dubai has its challenges, but from a potential point of view, if you have the right ideas, this place has no limits. Dubai is very KPI-oriented, and the decision process on big ideas can be very short and efficient. One of my big prediction for the next 10 to 20 years is that innovation centers will deeply shift to developing countries and be decentralized from main centers like the Bay Area. We are entering in a new cycle, and we’ve already started to see this happen: [cities like] Seattle, London, Berlin, Singapore or even unique poles like Shenzhen, where Apple recently set-up an R&D center and where hardware hacking is as common as software development in the Bay Area, are becoming relevant as global players for innovation.”

What's a MENA-based startup that you think has made a difference to the region?

“I’m a big fan of Fetchr. Idriss Al Rifai [founder and CEO of Fetchr] is a smart guy who created a service that makes sense for the region, but you could not achieve a similar goal in the U.S. or in Europe due to the high operational cost that it would represent. Also, the fact that they attracted a foreign VC means a lot for the region and its ecosystem. Every entrepreneur in the region should thank them for that.”