The No. 1 Strategy Lesson You Can Learn From Tom Brady and Those Super Bowl Champs

The positive momentum you get by sticking to "Plan A" and focusing on executing the next play is what won the Super Bowl. There was no "Plan B" for the Patriots.

By John Brubaker February 8, 2017
Opinions expressed by Entrepreneur contributors are their own.

Are you running a "Plan B" business, or living a "Plan B" life, for that matter? What I mean by that is a scenario in which you decide you want something to be one way, yet act another way.

It's a course of action that can affect your business.

Related: 12 Signs You Have an Entrepreneurial Mindset

Say that you create a business plan with the best of intentions, but when adversity strikes, you panic and change course or revert back to your comfortable default position. You then spend your time going through the motions; and that leaves you and your business still breathing but barely alive. Sound familiar? Many people want stadium status results in their business but quickly lose confidence in their game plan just because it doesn't yield immediate results.

The fact that that didn't happen in last Sunday's Super Bowl game is a lesson for entrepreneurs. Obviously, I'm talking about Tom Brady and the Patriots' come-from-behind strategy.

In short, when they were getting blown out in the first half, they didn't go back to the locker room at half-time and dramatically change course to a "Plan B." Instead, they trusted the process, stuck to their game plan and, over time, reaped the results.

If your business isn't yet where you want it to be in comparison to the competition, take consolation in the fact that the only time the Patriots led during that entire thrilling game was the final score.

With 9:44 seconds left in the fourth quarter and a 16-point lead, the Falcons -- according to ESPN's win probability statistic -- had a statistical 99.6 percent chance at victory. 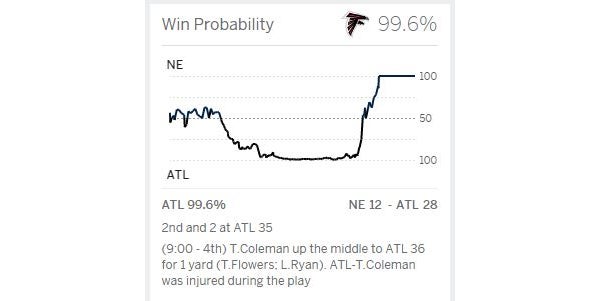 So, how did the Patriots overcome that 16-point deficit? One play at a time. How do you do that in your business? Through the disciplined habit of focusing on your version of "the next play."

The next play may well create positive momentum for you. Discipline is a momentum-maker and, make no mistake about it, giving up prematurely to opt for "Plan B" is a momentum-taker.

Tom Brady's core principle is "next play, next step, next day," which also happens to be the best strategy for every entrepreneur trying to overcome what feels like insurmountable odds.

What habit do you need to break, to improve your results? A destructive habit. Such habits are nothing more than mediocrity with momentum. When this becomes the rule instead of the exception, you pay a price. Why? Because a bad decision that results in a temporary setback is akin to a thin wire, small and weak.

A series of bad decisions weaves together many thin wires into a thick, strong cable over time. (Mediocrity with momentum is hard to break.)

The positive momentum you get by sticking to Plan A and focusing on simply executing the next play is what won the Super Bowl. There was no "Plan B" for the Patriots and there shouldn't be one for your business either.

The best thing you can do, then, is not have a plan B because it distracts you from committing yourself in full measure to plan A. It makes it easier to default back to quitting on Plan A. The only Plan B your organization should have is the determination to enforce Plan A.

The Patriots didn't make dramatic half-time adjustments; they just went back out and executed the existing game plan better in the second half. You even heard the coaches and players say this in the post-game press conference. What if the Patriots had gone into the locker room and said: "Well, we gave it half an hour and the plan isn't working; lets change everything and go to Plan B."

Had they done that, there's no doubt that Boston would been on the losing end that night. They had a solid Plan A and saw it through to its logical conclusion.

What does giving up prematurely and running a Plan B kind of business cost you? Usually, it costs you pride, profitability, peace of mind and confidence. Every day, instead, you should be waking up and asking yourself what your team's version of the next play, the next step and the next day needs to look like.

Related: The Conclusion to This Super Bowl Ad Was Deemed Too Controversial for TV

After all, you didn't wake up this morning intending to be mediocre. So, think of this rule as applicable to a kind of "Super Bowl" of business.