Infographic: The Tide Turns For Women In Tech

By The Infographic.ly Team March 2, 2017
Opinions expressed by Entrepreneur contributors are their own.
You're reading Entrepreneur Middle East, an international franchise of Entrepreneur Media.

In studying women in the workplace, there is much to be said about a lack of sufficient representation. Within the tech world, it is an intuitive recognition that women have difficulty establishing themselves in technical and founding roles. Though there has been modest progress, a McKinsey study found that almost twice as many men are hired externally as directors and SVPs, when compared to women.

The underlying problem is two-dimensional. Indeed, while women make up half the workforce, only 24% pursue a STEM (science, technology, engineering and mathematics) degree. In developing countries, the number is even less. Moreover, when women do start working in tech companies, the lag in early stage promotion makes it even more difficult to ascend to more senior managerial roles. For example, 7% of partners at the top 100 VC firms are women; and only 12% of partner roles at corporate venture firms and incubators are held by females. According to the Sheffield study, the Middle East suffers a total income loss of 27% as a result of an unfavorable environment for women working and starting up companies.

Although the gender imbalances are still very much present today, the tide seems to have turned in favor of women, with a growing number of initiatives which are focused on closing the gap. More and more women are taking it upon themselves to change the status quo. With a more favorable ecosystem, there has been a 68% increase in the number of businesses founded by women between 1997 and 2014. In the US, the number of startups with a least one female founder grew from 9.5% to 18% between 2009 and 2014. 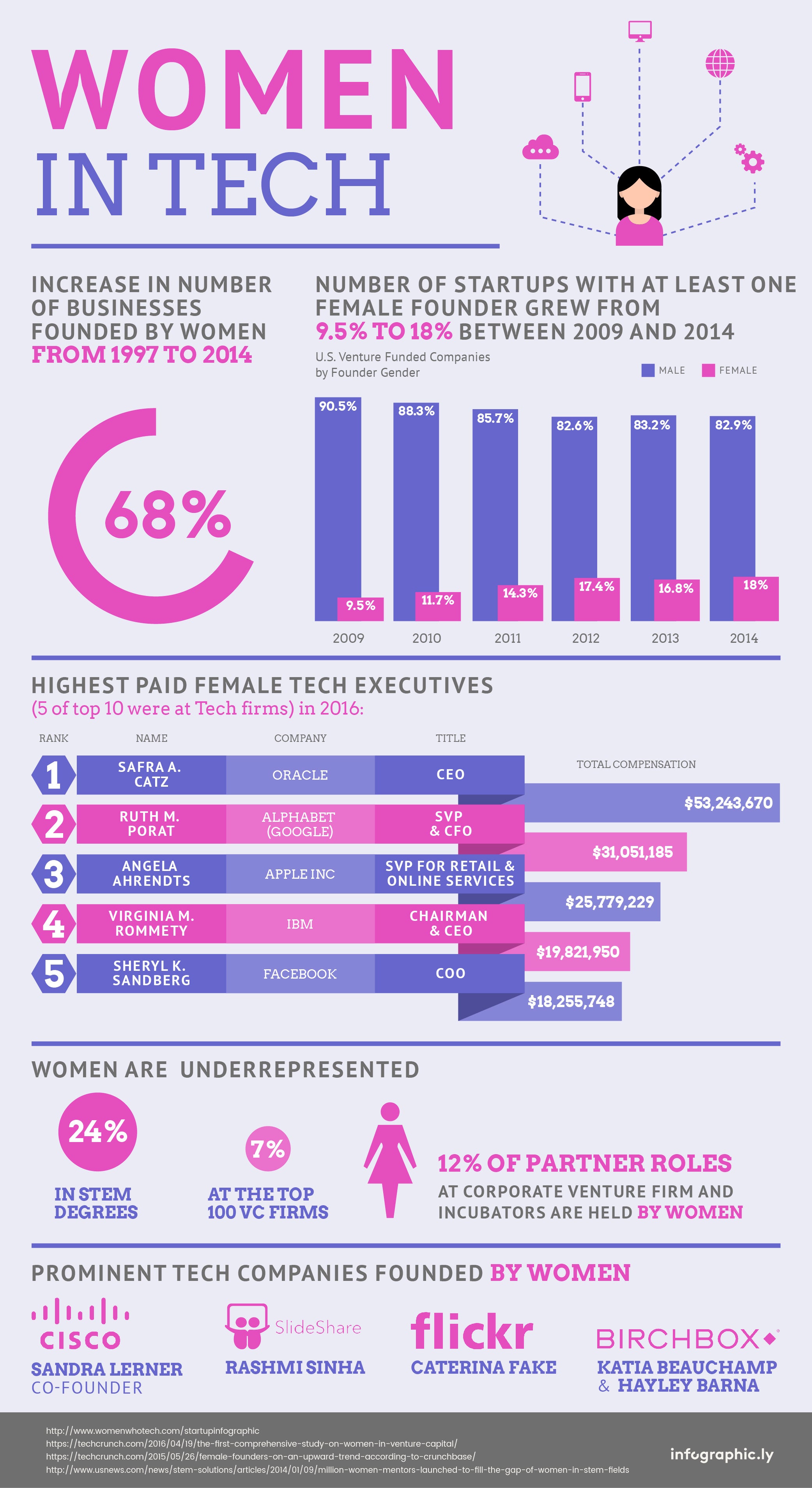 In 2016, five out the ten most paid female executives worked at the world’s most prestigious tech firms. Safra Catz’s, co-CEO of Oracle, had a total compensation reaching $53,243,670. Other notable figures include Ruth Porat, SVP and CFO of Alphabet, who received a compensation figure of $31,051,185. Angela Ahrendts, Apple's SVP for retail and online services followed with a compensation totaling $25,779,229. IBM’s current CEO and Chairman, who was also the first woman to head the company, Virginia “Ginni” Rommety’s total compensation summed up to$19,821,950, taking her place on the list just ahead of Facebook’s COO, Sheryl Sandberg with $18,255,748.

The success of these prominent female leaders certainly attracts more attention to women in the tech sphere. Beyond the Catz, the Sandbergs and the Rommetys, there are “crops” of women who have successfully launched (and continue to launch) their own tech startups and companies. Examples of famous companies founded by women include: Cisco (Sandra Lerner), Slideshare (Rashmi Sinha), Flickr (Caterina Fake) and Birchbox (Katia Beauchamp and Hayley Barna).

Over the next 10 years, the need for tech and STEM skills is crucial in securing the jobs of the future. It is therefore imperative to mobilize efforts, which will prevent the sidelining of women in the field, and promote their interest. After all, as Professor Karen Spärck Jones aptly put it: “Computing is too important to be left to men.”