By Sindhu Hariharan March 12, 2017
Opinions expressed by Entrepreneur contributors are their own.
You're reading Entrepreneur Middle East, an international franchise of Entrepreneur Media.

The Jordanian chapter of global entrepreneurship support organization, Endeavor, has a tricky problem on its hands when it comes to developing their pipeline of startups they want to support in the country. Despite its mandate to transform the Kingdom’s entrepreneurial ecosystem, Endeavor Jordan claims to be unable to find “high-impact entrepreneurs who lead high-growth, innovative businesses that can create material wealth and employment in Jordan”- and the reason for this is because these founders are either in the process of relocating from Jordan, or have already relocated to markets more favorable for their business.

Endeavor Jordan conducted the Jordan Business Migration Survey in November 2016 among 125 Jordanian enterprises, and the results shocked the organization. When these companies (of different sizes and from a variety of sectors) were asked if they were currently considering moving their business out of Jordan, 72% said that they were. “We asked entrepreneurs: ‘If you were to start your business all over again, would you set it up in Jordan?’” says Rasha Manna, Managing Director, Endeavor Jordan. “Astonishingly, 60% of respondents said they would not.” Not just that, 45% of the respondents also said that they would consider moving not just their headquarters, but entire operations as well. With regard to the study sample, while 125 may not be a number commensurate to the count of companies who set out to launch in Jordan, the grievances are quite common, and it’s important to note that almost half of them belong to the technology sector.

That is why Endeavor Jordan also hosted an interactive event post the survey for both public and private sector representatives to discuss solutions. Speaking about the study and the event thereafter, Manna states that the survey results are perhaps an indicator of Jordanian entrepreneurs’ lack of confidence in “any short-term reversal of the unfavorable economic and entrepreneurial situation” in the country. According to The World Bank’s research, Jordan’s economic growth was observed to be “subdued” in 2016, as regional instability takes a toll on the country. Jordan has been playing a substantial role in “managing spillovers from the Syrian crisis,” notes the World Bank. Moreover, in the bank’s “ease of doing business” ranking -a metric that ranks economies from 1 to 190 with first place being the best- Jordan’s recent standing is at 118, in comparison to UAE’s 26th rank and Saudi Arabia’s 94th position. 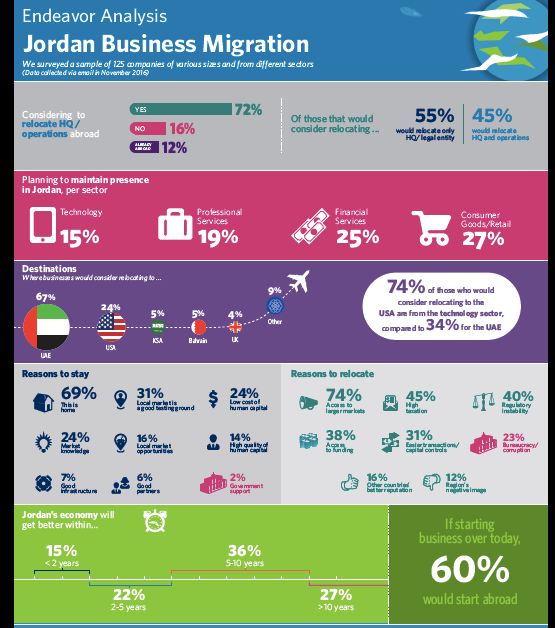 This perhaps explains the regions figuring on top of Jordanian entrepreneurs’ wish list for migration. When asked where they would consider relocating to, 67% of the survey respondents said they would prefer to move their business to the UAE; 24% of respondents (majority of these from the tech industry) stated that they would choose to relocate to the US- a move that may not be as easy after recent developments in US around immigration regulations. Historically, Jordan is known for producing strong tech talent, and most regional enterprises count a significant portion of technical staff with ties to Jordan. In terms of entrepreneurial successes in the region, the acquisition of Maktoob.com -a company founded by Jordanian entrepreneur Samih Toukan- by Yahoo always features as a key instance. Subsequently, and more recently, notable MENA startups such as Jamalon, MadfooatCom, CashBasha, and Kharabeesh have all been able to start their ventures from scratch in Jordan, and gone on to scale their businesses in the country.

Given this history, Endeavor Jordan was keen to look at the key reasons leading to such migration trends, and found that 74% of respondents were wanting to access larger markets. High taxation (45%), regulatory instability (40%), and access to funding (38%) constituted a few other reasons for enterprises to look outside Jordan. In the case of online bookstore Jamalon, founded by Jordanian Ala Alsallal, the founder relocated to Dubai in 2016, although the startup maintains operations in Jordan (where almost 90% of his employees are based) for “keeping costs down.” However, Alsallal tells Endeavor that last year, when Jamalon set in motion its plans to scale up and introduce publish-on-demand capabilities to the Middle East, they did not find Jordan’s regulatory environment to be conducive for the new model. Similarly, Jordan-based media platform Kharabeesh is another startup whose co-founders, along with most of the executive team, relocated to Dubai this year.

Speaking of the ways to address the observed trends, Endeavor Jordan’s Manna says, “Any rectification of the local entrepreneurial ecosystem requires the support, collective efforts and long-term commitment of all relevant stakeholders from the public and private sectors backed by a cohesive government strategy that develops a consistent policy framework.” For instance, inadequate sources of venture capital in Jordan results in most ventures relying on informal funding through family and friends. Even with tangible developments in this scenario in recent years, the risk appetite of the financial institutions continues to be low. Hence, Endeavor emphasizes that a long-term commitment from stakeholders, a “more holistic approach,” and public-private joint efforts is needed to reverse this trend.

However, despite these dominant trends revealed by the data, it’s important to note that there is also optimism among the nation’s entrepreneurs that more success is to come. Besides success stories to inspire aspiring entrepreneurs, and a growing support system, Jordan has also had global recognition and commendations come its way recently. In a recent visit to the country, Amazon’s Jeff Bezos was heard praising the incentives offered by the Jordanian economy for ICT ventures, and the Kingdom’s investment climate in general. As an entrepreneur who had a chance to meet Bezos in this visit, CashBasha co-founder Fouad Jeryes insists that not all businesses are the same, and decisions to enter new markets stems from the needs of each venture. “For us [CashBasha], our network, our reach, Jordan is the only place we would be able to progress with such momentum in such short time,” he adds.

This optimism was uncovered in Endeavor’s survey as well, with over two-thirds of respondents who choose to keep their business in Jordan saying, “Jordan is home.” A quarter of the businesspersons also said that the low cost of human capital was among the reasons they remain in Jordan. A case in point is the startup MadfooatCom, a fintech venture behind the launch of Jordan’s electronic payment system eFAWATEER. While the fact that the company’s major client is the Central Bank of Jordan has a lot to do with the startup staying in Jordan, MadfooatCom founder and CEO Nasser Saleh says that “the high quality of financial services and technology talent,” and a “favorable ecosystem,” are reasons that keep them in the country.

On its part, Endeavor Jordan admits that while it is understandable for founders and business development personnel to be based out of the larger markets in the region, their concern lies with the ventures (such as the 45% of the surveyed respondents) that wish to relocate their operations entirely. The organization says: “with prices rising in Jordan and the best of the country’s talent increasingly seeking jobs abroad, Jordan is fast losing what is considered its competitive advantage.” And it is to plug this leak that Endeavor Jordan wants to “act as a catalyst” for sustainable economic growth in the region, and wants to tap into its network of mentors to help create employment opportunities in the local market. Here’s wishing the organization all the best in this endeavor.

Related: MENA Entrepreneurs And Investors Come Together In Jordan For DealMakers 2016

Nasser Saleh, founder and CEO, MadfooatCom. Image credit: MadfooatCom.
While MadfooatCom currently has no plans to move out of Jordan, Saleh says that the startup may consider moving in the future, “if current and new investors in the company demand that we relocate to a more investment-friendly country.” He adds that the startup “might consider relocating our headquarters and keeping part of the operations in Jordan if the tax system becomes more unfair for our sector, and if the cost of quality technology resources and operations becomes higher than other countries.”

“Our business in the UAE has been growing much faster than it has in Jordan, which made the move a necessity. It has also facilitated our expansion into the Saudi market. However, the company does not plan to relocate its operations from Jordan, which will continue to serve as a support office to Dubai and the KSA.”

Ala Alsallal, founder and CEO, Jamalon. Image credit: Jamalon.
“Customs and taxation regulations for exports, as well as free-zone regulations, have been so behind [in Jordan, compared to] other countries in the region. Given that 95% of Jamalon’s sales are outside of Jordan, we found Dubai to be a good location for our print-on-demand, which will shape the future of the publishing industry in MENA. We would have loved to have set this up in Jordan.”

Fouad Jeryes, co-founder, CashBasha. Image credit: CashBasha.
“In my view, and to the most sincere of my intentions, Jordan in itself is a startup. That is its prime advantage. The dynamics of the country present a hotbed for tech startups to blossom. It’s a resourceful environment where most advice, partners, and support systems are way less than six degrees away from you. Although KSA might be the major market to serve, and the UAE allows for mature products to seek larger clients, the cost of setting up shop, recruiting talent and proving product viability in Jordan is practical and achievable. With Jordan being a “spring-board” for companies and a place where their headquarters are still based, we mustn’t forget that this part of the world is sadly fragmented, and Jordan is a small market, but companies jump to other areas to reach additional customers. It’s expansion, not desertion.”