Made For The Middle East: Halla Walla Offers Emojis That Are Characteristics To Arab Culture

By Pamella de Leon April 5, 2017
Opinions expressed by Entrepreneur contributors are their own.
You're reading Entrepreneur Middle East, an international franchise of Entrepreneur Media.

Living between New York, London and Dubai, Halla Walla co-founders Eriko Varkey and Yasmine Rasool often faced the dilemma of explaining their background and the reality of living and growing up in the Middle East. Driven to alter the perception of Arabs in the West, especially with the current state of discourse worldwide, the duo set out to create Halla Walla to depict expressions and emotions in colloquial conversations representative of the region. “When it came to representing the modern Middle Eastern voice, we felt there was really a gap in social messaging platforms,” Rasool says.

“From our loud families, endless cousins, gatherings and shared meals, to signature phrases, fashion statements, football, shisha and late night shawarma runs- our lives are brimming with inside jokes and over the top emotions that needed a platform to be expressed.” From “Yalla!” and “Shway shway,” to the much loved shawarma, as well as the huge mandi often shared by families in the Arab world, and even an ode to Chips Oman- these are just a few of the icons you can now express yourself with, from Arab emoji app Halla Walla.

Halla Walla –which is a form of a friendly greeting in Arabic- actually started as a side project for the founders. The duo, whose backgrounds are in arts and business, heads creative agency YERV, with the self-funded company having previously launched Waastaa in 2015, a platform and directory for creative professionals worldwide. In building Halla Walla, they found it an enjoyable pursuit to look into their everyday life and redevelop an appreciation for their local culture.

A four-month development process, it consisted of researching, brainstorming, designing, and conducting focus groups in the GCC, New York and London to hear from their friends on what kind of Arab emojis they want, before releasing it on the App Store and Google Play and introducing it to the public with a launch party in Dubai. As with any venture, they had their share of roadblocks too. Their biggest one was managing various components of their operations in three different cities, with the process being a learning curve as they worked with developers and engaged with the Arab tech space.

Having a strong foundation was a significant aspect they focused in overcoming problems ahead- this is also distinct in their outlook to having investors. Though they’ve been approached by offers, they’re currently focused on growing organically, and intend to remain as such. They add that companies who receive investments tend to spend without engaging with their audience, and so they want to take their time.

Filled with more than 200 emojis of popular and nostalgia-inducing references to people, culture, food and phrases, it’s currently available for iMessage at AED3.69, and as a keyboard app at AED7.69 on both iOS and Android. Being a paid app, when asked whether they were worried if it would hinder growth and usability, the co-founders were confident as based on their research, they found that paid services are more stable and often cultivate a dedicated user base. “We believe in quality over quantity, we are building our brand in [the] hopes to attract[ing] a loyal audience following,” says Rasool. “We want to grow with our customers and cater to their needs. With that being said, a charging mechanism creates quality control, hence [we can garner] loyal customers from the start.” 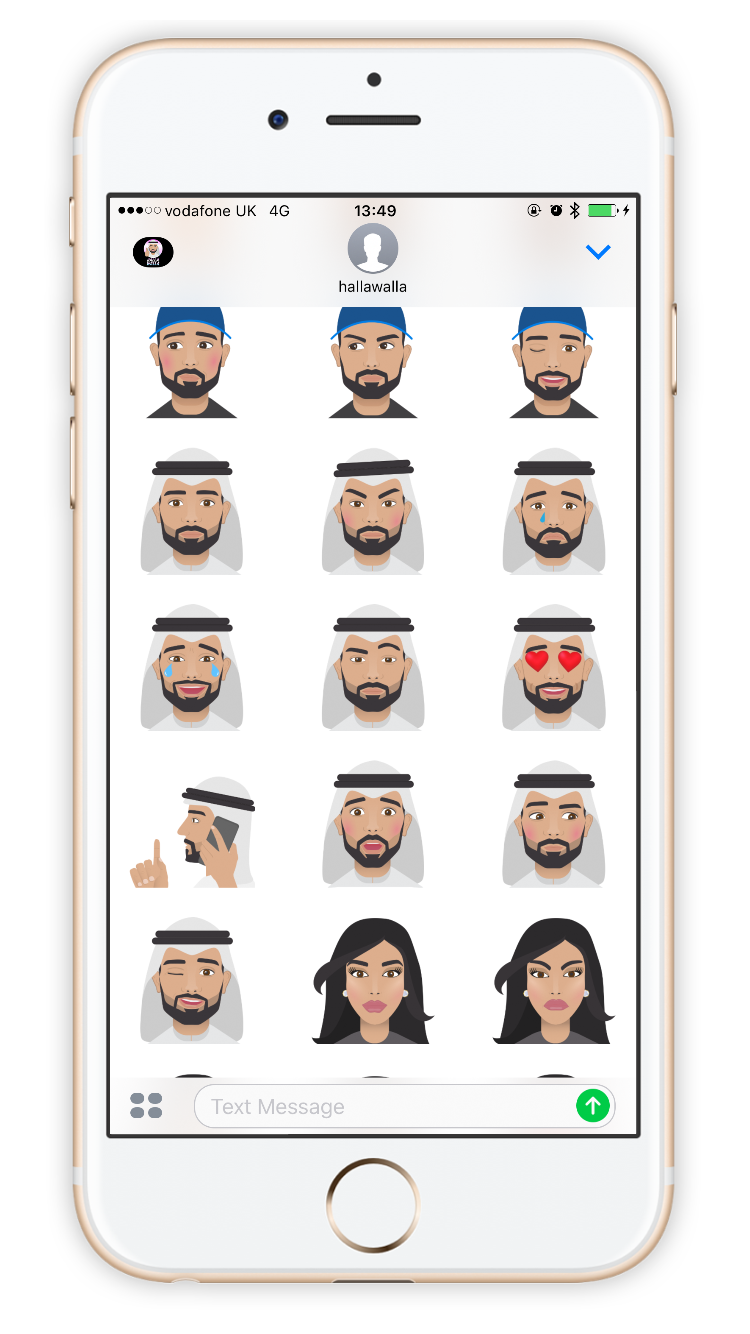 As for their marketing approach, Varkey and Rasool are firm in their strategy of fostering a brand story- letting their audience connect with the brand. Their early adopters’ feedback conveyed how the app’s characters relate to personalities seen among Arab culture. “We all know a Shaikha, Lulu, Waleed and Ahmed [characters from Halla Walla]. We brought these characters to life, as we depicted their characteristics to emulate a friend, cousin or neighbor we all may know.”

They engage with their audience on social media, focusing heavily on content creation, but also keeping in mind web users’ attention span by having content presented briefly- case in point, their marketing videos last about 30 seconds. And the strategy is working- the duo says feedback has been “overly positive and encouraging.” Gifs are popular among the users, notably the “shway shway” hand gesture, and the gif of a slipper being thrown- a throwback to growing up in the Middle East: “It was the notion of [a mother] bending down to get that slipper, [and] that’s when you knew you had to run!”

The founders also are pleasantly surprised with the range of demographics eager for the next batch of emoji. “We started Halla Walla with the intention of entertaining people, but also to educate people on the beauty of our culture beyond the stereotypes. The more people who join our quest, the more determination we have to make our project a positive part of their lives.”

On the region’s cultural representation in tech and business, Varkey and Rasool note that it’s a definite growing market, with opportunities for niche ideas too. They were keen to create something specifically for the Arab market, and say that the current tech-savvy culture is constantly demanding change: “With the increased competition and constant demand for updates, only the best will flourish, and this is how the industry will continue to improve and become better.”

Going along with the market shifts is evident in their business approach too- with the traction of Halla Walla, YERV has now released an augmented reality (AR) game called Wain Waleed, using localized digital content. In the AR game, Halla Walla emojis “come to life,” as its characters are prompted to interact with its environment, and users have to find objects and characters to win prizes such as dinners for two, and even concert tickets. As of now, it’s currently available for iOS devices.

Meanwhile, Waastaa has an upcoming second phase, and Halla Walla has new packs that will be released too. The duo says that with YERV’s mission to “explore, inspire and connect,” they assert that popular culture shouldn’t be underestimated and can have a positive impact on society. On a final note, the duo is ready for more and says, “It is a constant research and building block ratio. We both believe that if you want something in life, you got to roll those sleeves up and get it.”

Related: Trends, Analysis And Predictions For Digital Media In MENA In 2017

What are your three tips for creating an innovative, fun product for the region?

2. Quality over quantity “If you want something reliable and worth putting into the market, then take that extra plunge into creating a quality product.”

3. Know your market “[Do] constant research, focus groups and welcome criticism- understand that this region is a unique market, so the more you listen, the closer you will get to create an innovative, fresh new product tailored for your audience.”

Given the number of apps available today, do you think the boom days for app businesses are coming to an end?

“Market research shows that the App Store’s middle class is small and shrinking and the easy money is depleting. However, apps for massive social networks, on-demand services remain in high demand. Digging deeper we discovered that last year, 85% of all app revenues went to games, according to [market researcher firm] App Annie. Supercell, the top-grossing developer of Clash of Clans, reported revenue of US$1.7 billion in 2014- it spent US$440 million on marketing. That being said, we feel customers know what they want, and are more likely to be picky in their download curation of apps filling up on their devices- since realistically they only use up to 2-3 apps daily. And repeat- quality over quantity any day!”

Related: Designed In Dubai: UAE Startup YaHalla Wants To Stand Out As An Emirati Tech Brand

Startup Spotlight: Dubai-Based Community-Based Platform Hayi Raises US$325,000 As It Looks To Expand Its Services Beyond UAE's Communities