Energizing The Ecosystem: The UAE's Saud Al Nowais Sees Your Startup As The Next Big Thing

It’s hard to miss the enthusiasm with which Saud Al Nowais talks about entrepreneurship- his eyes light up, there’s a fervor to his manner of speaking, and the excitement he professes for this sector is quite palpable: over the course of my chat with him, Al Nowais would exclaim: “Unbelievable!” time and again, enunciating the word, as he spoke of UAE-based startups and technologies that he had seen and was impressed by. But don’t mistake Al Nowais’ interest in this space as being just a personal passion- in his role as the Commercial Counselor for the UAE to the USA, he has been tasked with, as his bio states, “assisting both countries in identifying mutually beneficial trade and investment opportunities,” and driving the startup economy ahead is a definite component in this endeavor.

“We do believe that this sector, for the next 10 years, is going to outperform a lot of other sectors, simply because there's a lot of interest in it, given the fact that you've got successful exits like Maktoob.com, like Souq.com, like Talabat.com,” Al Nowais says. “More and more private sector businessmen are looking at this asset class. More and more American VCs are now interested in the Middle East. There is a consuming society- look at Saudi Arabia alone. Look at the entire region. Don't look at just the UAE- look at the entire region, a region with a lot of potential growth. There is a huge consuming base that wants to consume products. And so, we believe that [encouraging] innovation and startups, along with SMEs, could really become the solution to providing more and more private sector jobs for the entire region, not just for the UAE.”

Seeing this rising interest in the UAE’s entrepreneurial space from investors and other such parties in America is what led Al Nowais and his team at the UAE Embassy Trade and Commercial Office in the United States partner with the US-UAE Business Council to launch Invest UAE, a report that delves deep into the startup ecosystem of the country, detailing everything from the rules and regulations governing this scene, to the investment opportunities that are out for the taking. Alluding to the recent spate of successful startups that come out of the UAE a la Souq.com, Careem, and others, Invest UAE declares that “for US investors, now is an opportune time to invest in the UAE’s blossoming startup scene, while conditions are promising yet valuations subdued.” 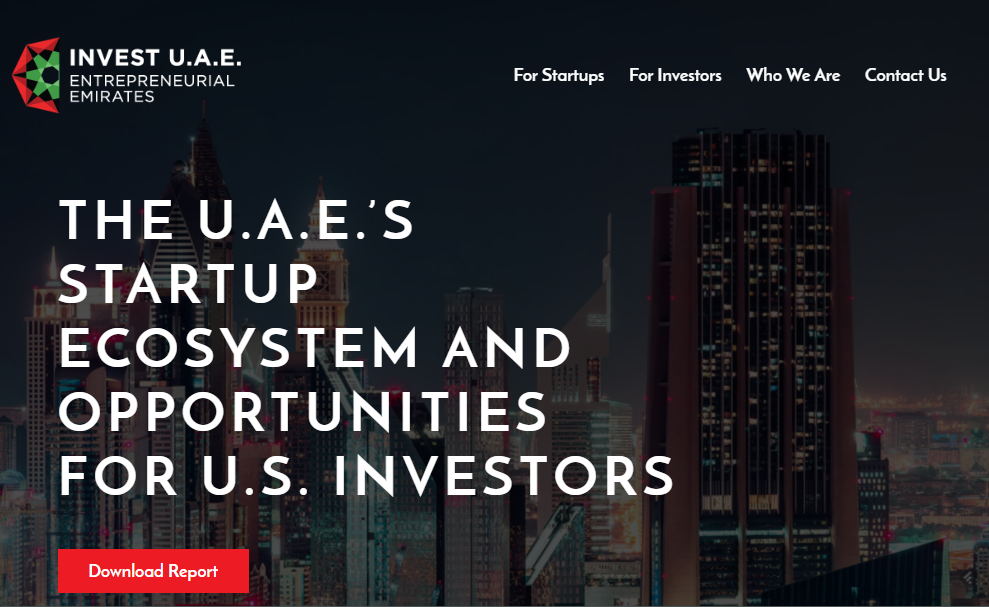 At the same time, the report also makes the case for the UAE as the best possible location in the Middle East for setting up a business in the region, noting that doing so “can serve as a magnet for regional capital and a launching pad for ventures in the greater Middle East Africa South Asia (MEASA) region.” Al Nowais is pretty emphatic about this particular point, and he doesn’t hold back when singing praises of the UAE as a place to do business. “Everybody understands –and a lot of people are becoming more and more convinced about this- that if you're in the Middle East, and you wanted to start up a company, you either go to Cairo, [or] you go to Jordan, or you go to the UAE. You go to Cairo, because it's a massive market. You go to Jordan, because they have some of the best programmers. But if you want to be protected legally, you'll go to the UAE. Because the UAE has some of the best legal infrastructure, as opposed to everybody else in the region, when it comes to incubation. It's easier to get a license. It's easier to find resources. It's easier to find angel investment. It's easier to find some funding. It's easier to find co-founders, because it's a melting pot, because everybody comes here, because of the infrastructure, the high internet connectivity.”

At this point, I note that the UAE’s favorability as a place to do business has been accentuated by the efforts of the government here, which has been pushing forth on encouraging entrepreneurship and innovation in the country, but Al Nowais interrupts me here, saying that the government doesn’t really push anything. “I don’t believe it’s actually pushing,” he says. “I actually believe it's organic growth… From my experience, the government will always start an initiative, and then the private sector will just follow on with organic growth- I love it. So you're seeing organic growth, as opposed to pushing a certain agenda. Yes, the government will set the tone. But, let's be honest: does the government really have a lot of control over the private sector, other than issuing policies or regulations? No. The government cannot go to a private sector company and say, I want you to do 1, 2, 3... They don't do that. But they'll set the tone, they'll put the policies in place, they'll give you the legal infrastructure, and then the private sector just comes in with organic growth. Everybody today wants to look at venture capital. Everybody wants to set up an incubation center. Everybody calls themselves an entrepreneur, even though some of them aren't- but I appreciate the fact that they want to be that. It's not bad to wish for something, or to want to be something, and label yourself an entrepreneur, or an innovator, or a CEO of a startup.”

As if to prove his point, Al Nowais then goes on to name a host of UAE-based entrepreneurs who quit their jobs, government or otherwise, to set up a plethora of innovative homegrown ventures- some of the ones he mentions include Khalifa Al Qama’s OpSys (“Look at what he has created- unbelievable!”), Khalifa Al-Jaziri’s e-Home Automation (“Some of the stuff that he has for home automation, I guarantee you that some of the best U.S. companies don't even have that technology yet!”), Fahad Al Kalooti’s MyBox (“We are helping them raise hopefully their Series B from the US.”), Ola Doudin’s BitOasis (“I know, for a fact, that some VCs are looking at her in the US.”), May Habib’s Qordoba (“This is a fabulous Arabic woman who used to work in Mubadala, decided to quit her job, was able to raise some angel investment in the UAE, and now, she's in Silicon Valley.”).

Related: Why The UAE's New Venture Capital Regulations Will Help The Ecosystem

It must be noted here that Al Nowais is an active participant in the startup ecosystem: he has a family business background (the Al Nowais family owns the Rotana chain of hotels), he’s an entrepreneur himself (he founded GoldCleats.com, an online platform that aims to connect soccer players with scouts, clubs, etc.), and he’s an investor too- besides being a part of the investment committee at Arab Angel Fund (an early stage VC firm focused on companies with international expansion potential), he’s also invested in companies in a personal capacity as well.

Given this background, Al Nowais is well-versed in the nitty-gritty of this space, and while he is indeed an active proponent of the UAE as an economic destination, he also acknowledges that there are still challenges to overcome in terms of the ease of doing business here. “There will always be hurdles,” he says, in a matter-of-fact way. “So, let's start, for example, with government hurdles. There are still some things that need to be changed. Why do I have to pay rent for a place- why can't I just get a license and operate from my garage? That’s something that needs to be solved at some point, and it will be solved; I guarantee you that. That's from a government perspective, and that's just one challenge. Another is the ability for some of the entrepreneurs to get visas quickly so that they can come here- that's something that the government is also working on, and trying to figure out ways where they can speed up the process, and make it efficient... And then from a private sector [perspective], I think, later stage funding is an issue. You can have some of the best ideas in the world, but if you don't have some cash to grow it, then that's an issue. Angel funding; there's plenty of it. There's plenty of that around, but growth funds- who's going to cut you a US$10 million check? Had STC Ventures and the Al Tayyar Group in Saudi not cut a $10 million check to Careem, they wouldn't have grown... Money is key. You need more and more players to cut you those kind of big checks.” But while these may be sobering thoughts about the region, Al Nowais remains quite upbeat about its prospects in the future. “This region is about to take off,” he declares, with passion. “Over the next 10 years, it's going to be phenomenal growth- you'll see.”

It’s easy to see where Al Nowais’s conviction about the future comes from- here’s someone who’s looking at the entrepreneurs in the region and, well, seeing their daunting potential. At this point, he starts dropping names of startups again: this time, his list includes Bayzat (“Talal [Bayaa] and his brother; amazing what they are doing.”), Compareit4me.com (“I don’t know the names of the entrepreneurs behind it, but [they have] beautiful figures!”) and MrUsta (“I like MrUsta a lot; Ibrahim [Colak] is a great entrepreneur.”)

And when I mention the oft-repeated complaint by entrepreneurs trying to grow their enterprises here, that they struggle to raise funds within the region, Al Nowais suggests casting one’s net beyond the Middle East. “This is my message to entrepreneurs in the region: do not shy away from American VCs, thinking that American VCs won't invest with you, because you're in a different region. Don't. If you have a solid product, with phenomenal revenue numbers, numbers don't lie. Put your numbers on a presentation, and come see me at the embassy. I will help you get to these VCs. Numbers don't lie- do not shy away... If you have a good product, and if you have solid numbers, and you've already been backed, try it. You're not going to waste time- talking to someone and pitching to someone is not a waste of time.”

But what about the Arab investors who are shying away from this asset class- what would be his pitch to them? “My advice to them is: find an advisor, or find someone that can spend two hours talking to you about venture capital, and just have an open mind. Don't commit to anything. Don't invest, if you're not comfortable about it. Just give people the chance to speak to you. You were nothing, once upon a time- and all of a sudden you've become successful, because you've built something successfully- and no one builds something by himself. I'm pretty sure someone helped you out. These entrepreneurs need your help- and they need your money. Listen to them. Give them a chance. Don't shy away just because they haven't done anything yet. Give them a chance… You never know when the big thing is going to happen. And quite frankly, you don't want to live with the guilt of passing out on an opportunity.”

Related: Three Steps To Building A Sustainable Entrepreneurial Economy In The UAE