5 Ways to Make a Strong Impression With Every Audience

Show up like a celebrity, and use these key techniques to guarantee a strong first impression with every presentation.
Next Article

In business, it’s imperative that you start off with a great and memorable first impression and even more critical when you’re speaking in front of groups. It’s the difference between being heard by your audience or having them sleep through your presentation.

Related: How to Hack a First Impression

Consider these benefits of taking your speaking abilities up a few levels and advance to celebrity influencer status. Here are the five key ways to making sure you’re seen as the ultimate authority.

1. Grab them before they see you.

Having a fantastic introduction will immediately boost your status. The very first secret to becoming an authority in public speaking is in how you position your introduction. This positioning secret is essential in guaranteeing that the message and energy you want to be communicated are directly expressed to your audience even before you take the stage. You are not always going to get a show host or sponsor that will have the kind of energy or speaking skills that are ideal to have them introduce you before you give your talk.

Rather than leave this to chance, a respected member of the Speaking Empire community, and founder of the Women's Success Summit, Michelle Villalobos uses a version of this powerful video introduction to position her before she sets foot on the stage. The video can also include testimonials from other influencers and authorities that sing your praises, so you can take the stage as the rockstar you are.

Your video introduction will make sure that you are putting your best foot forward, up to your own standards. First impressions are lasting impressions, so when you can captivate your audiences with your intro and position yourself as a celebrity from the get-go, your audience is more likely to pay attention to the content of your speech.

2. Leverage the transition of power.

The second strategy is to always make sure to have the promoter, event organizer or whoever is the top authority at the event introduce you. There is so much power to having a celebrity or someone that is familiar, recognizable and respected by an audience to come before you and present you.

I see it as a transition of power, whether it is the master of ceremonies or the head of the organization -- it is a powerful thing to be brought onto a stage by someone that has an influence on your audience.

The premise is that an audience is more likely to pay attention to the content of someone they trust. It is called the "halo effect": when there is a tendency for an impression created to transfer or influence another. If the speaker is brought onto the stage by someone seen as an authority, the audience will be more receptive to the presentation that follows.

In a room of people that have never heard of you before, you automatically receive a boost by having the known person introduce you. The transition of power and authority gives validity to the new speaker before the speaker even opens their mouth.

Related: 3 Steps to a Well-Structured Presentation

3. Call upon the transference of credibility.

Like the transition of power, the transference of credibility can be leveraged by simply having another celebrity mention your name. If a credible source mentions your name from the stage before you take the stage, the credibility you gain is phenomenal.

As an example, I was at a conference with business coach and author Dan Kennedy, and he mentioned that he and I had a book coming out and that I had a lunch break session coming up that everyone should attend. We had the biggest turnout we’ve ever had for this style of event.

Simply because he was the celebrity or authority, he did not have to describe me or introduce me. Kennedy merely mentioned my name from the stage, and everybody came to see me because he transferred authority to me as a speaker. I would say that this is simple but extremely powerful.

Let’s say that you just have not networked enough to have a celebrity or the promoter introduce you -- not even to mention your name once. What do you do?

It’s not the end of the world. You can always apply covert influence to your introduction.

Given that you do not have a famous or familiar face to transition power or transfer credibility over to you, you can always have a client or an affiliate introduce you by selling you to the audience with their own authentic story about you.

A client of mine and founder of the Bold Brave Women Movement, Mai Vu, speaks at a number of events -- many where the audience knows or has heard of her, and some where attendees are meeting her for the first time. No matter her situation, she always looks to have a member of her community, that she has impacted or dramatically changed the life of, make an introduction for her.

Mai says, “Everything is so polished nowadays so when someone the audience doesn’t expect introduces you and speaks from the heart, they will be able to raise your credibility and trust with the audience, and sell you in a way you cannot do yourself.”

5. Blitz them with pre-event marketing.

To get started with pre-event marketing, talk to the event organizers and ask them how you can provide value ahead of time for the event. It is a simple gesture but will make you stand out because you will be seen as a professional wanting to build value for the promoters and their audience.

Salespeople know it takes six or seven “yeses” to make a deal, so promote yourself the same way with at least six to seven touch points before the event to market yourself as an authority speaker. This pre-event marketing can include online and social media, webinars or Facebook Live presentations, direct mail campaigns and employing the event hashtags.

You will be shocked at how easily you can become a perceived celebrity by following these five simple strategies.

The next speaking engagement you have, don’t leave your introduction to chance, work with the event organizers to implement these strategies to make sure you make a great and lasting first impression, and are seen as the celebrity speaker that you are. Plus, the word will get out, and you will become a sought-after speaker.

After all, as Harry Potter author J.K. Rowling has said, “A good first impression can work wonders.” 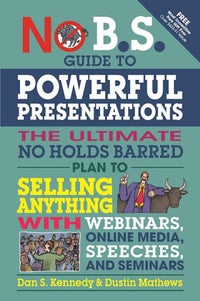 No B.S. Guide to Powerful Presentations

No B.S. Guide to Powerful Presentations

How to Use Storytelling to Make Your Audience Fall in Love

7 Ways to Captivate Any Audience

Steve Jobs' Most Famous Speech Is Totally Overrated. Here's Why.

4 Secrets of Becoming a "Presentainer" Who Grabs an Audience's Attention

The 12 Parts of a Successful Signature Presentation