P. N. C. Menon is a detail-oriented person- that particular aspect of his personality became quite clear to me as soon as I began my conversation with the 68-year-old entrepreneur. I could see Menon’s inquisitive nature come to the fore as he peppered me with questions relating to my background and career so far- he was interested in knowing the specifics, he wanted to know the how and the why. (The fact that Menon had actually listened to me and registered all that I said became apparent when he later introduced me to other members of his organization by correctly recalling all of the particulars that I had told him.)

Of course, such attention to detail is one of the many traits that has stood Menon in good stead over the course of what can be described as a truly remarkable entrepreneurial journey, which sees him today at the helm of the Sobha Group, which was established back in 1976 in the Sultanate of Oman. As its founder and Chairman, Menon has essentially spearheaded the growth and development of the Sobha brand for over 40 years now, and he continues to do that to this very day- when I ask him what drives him to come to work every day, he laughs and replies: “This is my playing ground- it’s not work! I get maximum enjoyment from this… It is [my] passion. It’s not business; it’s a very personal thing.” Given that response, it’s easy to see where Sobha Group got its “Passion At Work” motto from- Menon certainly seems to live by that principle, and his company is following his lead in terms of what he calls “an unending pursuit of excellence.” 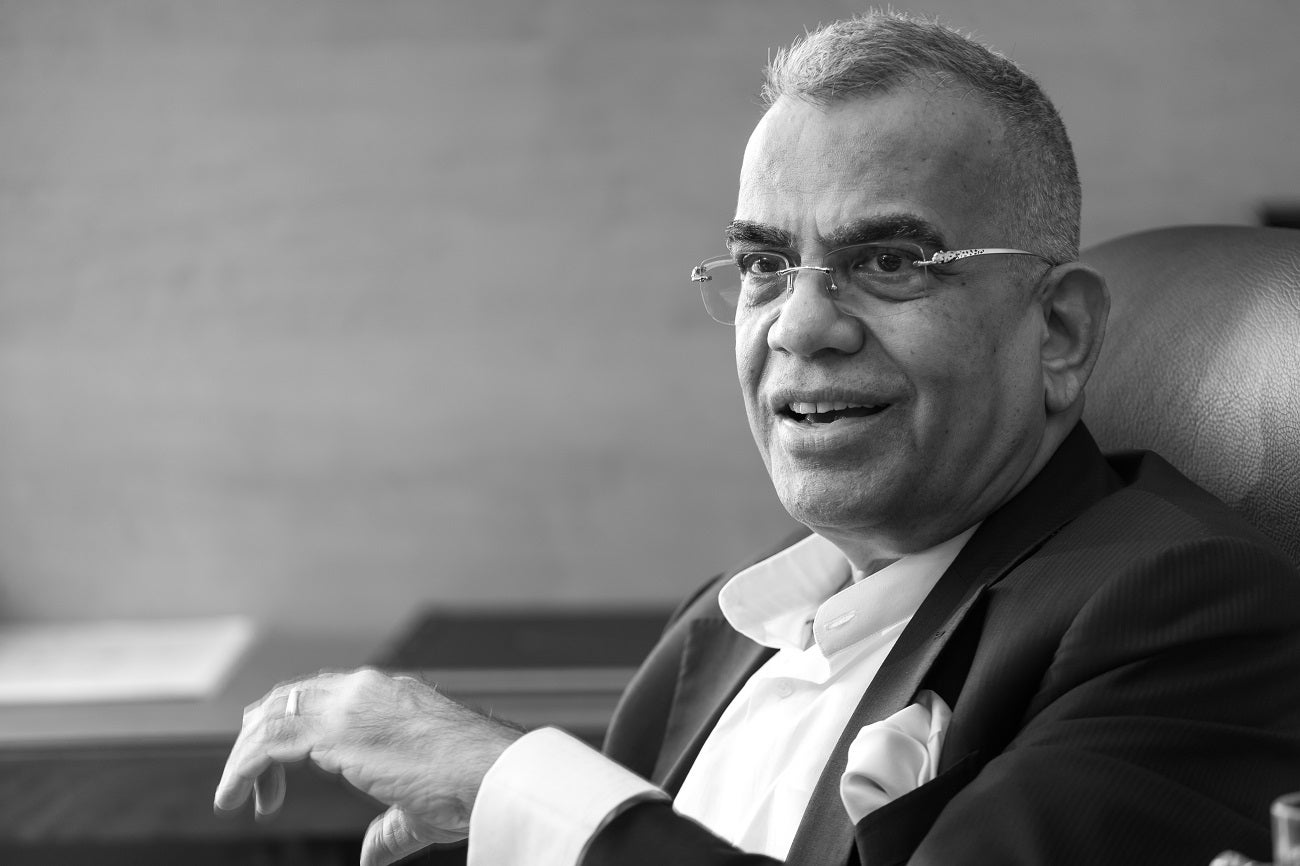 With operations in India and the Middle East, Sobha has, since its inception, delivered over 89.64 million square feet of real estate projects, and is currently at work on 71 projects with a developable area of 101 million square feet. In India, where Sobha Limited is a listed entity, it was recently declared by the 2016-17 Brand X Report to be “the top national realty brand across asset class” for the third consecutive year. In contrast to that, Sobha is a relatively new entrant in the UAE’s real estate space, but the developer has still managed to garner quite a lot of attention and interest for its current projects, which include the US$4 billion Sobha Hartland and the $8 billion Meydan Sobha District One developments in Dubai.

With regard to the current state of the real estate market, Menon notes that while there may have been challenging times in the past year, he’s expecting an uptick in activity in 2017. “The real estate business is cyclical, the world over; it’s not only Dubai,” he explains. “According to me, this year, we have gone into a positive cycle.” This, of course, bodes well for Sobha as an enterprise in the UAE’s real estate sector, where it hopes its finesse and expertise (Menon notes the company’s capabilities as a backward integrated institution as being one of its main differentiators), as well as the uncompromising quality of its products, will help it become a market leader in this particular space.

Of course, Menon’s track record so far does tip the odds in his favor- after all, Menon’s now legendary success story began with the Indian entrepreneur arriving in Oman with only seven dollars to call his own in 1976. With borrowed capital, he set up a small business that dealt in furniture and interiors on the streets of Muscat, and this outfit grew slowly (but surely) into an enterprise that became known for its quality of work.

As time passed, the company began securing a number of noteworthy interiors contracts, including projects from the Sultan’s office, which led to its next phase of growth. As the business solidified its presence in the Gulf, Menon then made a move into India’s property sector by setting up Sobha Limited in 1995, which has since become the country’s third largest real estate development company, in terms of total square feet delivered. In the meantime, Sobha also made its entry into the UAE’s real estate scene in 2003, with the Dubai-headquartered company focusing primarily on residential and commercial projects.

Menon has nothing but good words to say about doing business in Dubai- he’s an unabashed admirer of the growth the Emirate has seen so far, and he is definitely on board to participate in its continued development in the years to come. “It is one of the best places to do business,” Menon declares. “You are not disturbed in any way; you just do whatever you want to do to be the best. Every opportunity is provided by the environment and the country.”

At this point, it’s pretty easy to see that Menon has accomplished a lot –a lot- over the course of his entrepreneurial career. But what’s particularly interesting to note about his journey so far is that when Menon reaches a particular stage of success, he then goes and raises the bar for himself, by setting new goals to aspire toward. It’s a curious little trait- but it also makes it clear that Menon, as an entrepreneur, is never complacent. “You are born with that kind of outlook, you know,” he says. “You are never happy with what you do- there’s always a feeling that there’s a gap. And when you fill that gap, there’s another gap- so it’s an unending pursuit of excellence. I don’t think you can go to market and start developing that quality- it’s in the DNA of a person, who looks for that perfection.”

As the saying goes, nothing succeeds like success, and Menon believes in that wholeheartedly- according to him, there is no finish line to the growth one can aspire to for their enterprise. “As a businessperson, you cannot [ever] say that you’ve reached the peak of whatever you wanted to achieve,” he says. “You cannot say that there is no further scope for you to grow. Diversify, get into something else. Move into another geography… The growth is never-ending. Even for the biggest companies in the world, I’d say that there is a tremendous amount of opportunities for them to grow further. Sometimes it may not be in the same domain- you just have to take a diversion.”

Menon’s refusal to budge from the high standards he has set for the company has also led him to have a reputation, among some of his staff at least, as he himself put it, of being “a terror.” Sobha Group President Jyotsna Hegde tells me that there were times not too long ago when Menon would lose his cool at subordinates who, say, had made a mistake, or hadn’t ascribed to the same level of perfection he believed in.

But Hegde notes that such temper flare-ups were simply a reflection of Menon’s passion for his work- he just couldn’t see why others didn’t share that feeling. “When you look at it from his side, it was frustration,” Hegde explains. “Because he gets it so quickly, and he knows it so quickly- and he is frustrated that you don’t get it… Once you understand that, then you see the value of everything you thought was difficult, and you become accepting.”

However, this matter is no longer a topic of discussion at Sobha, Hegde reveals- Menon’s temper issues are now a thing of the past. Last year -on October 3, 2016, to be exact (yes, Menon remembers the date all too well)- Menon lost his temper for some reason in the office, following which Hegde told Menon that his actions would hurt the confidence of the young upstarts who had joined their company, and might even cause them to leave. “So, she said, you know, this will kill our company,” Menon recalls. “If you want to build a professional company (which we are looking at, definitely), she said, you need to please stop doing this, and it will be in the interests of the institution. I said, give me three months’ time.”

Did it work? “I have now completed 10 months without shouting,” Menon says, happily, with Hegde confirming the veracity of this statement. Of course, this is just another testament to Menon’s psyche- he just needs to be convinced of the rightness of a particular course of action. And once he has done so, it’ll be hard to budge him even a little from that particular path- a quality that seems to have kept him on the right track for all his years in business.

For people who are just entering the Middle East arena to set up their businesses, the environment they have in front of them today is a lot different from the one Menon set foot in all those years ago. Menon notes that entrepreneurs today seem to be in a hurry to see their businesses succeed- it’s a characteristic that he –no surprises here- is not particularly fond of. “We should never be in a hurry,” he says. “The foundation, you know, is horizontal, and the growth is vertical. And the foundation of the business has to be done effectively… This is where I have seen most of the people fail [with their businesses]. They are in a hurry, they want to be a billionaire, they want to get to X/Y/Z- [but] it will not happen like that. You’ve got to be extremely patient. You’ve to be extremely careful with your name and reputation- build that, create a strong foundation, and then success is automatic. But if you’re going to be in a hurry, you’ll have a weak foundation, and you will collapse.”

It may be a real estate-centered analogy, but Menon knows what he’s talking about- building the Sobha brand to what it is today has, of course, taken an awful lot of patience and hard work, but it has also involved an absolutely strict unwillingness to cut corners in any aspect of the business. It’s a value system that Menon has put in place at the top, and he believes it has indeed differentiated the company from its peers, and also ensured its longstanding success. “If you start chasing money in any business, you will fail,” Menon declares. “Start chasing success- money is only a byproduct.”

Dubai Chamber Witnesses A 35.5% Increase In Number Of Registered Companies From The ASEAN Region