By Sindhu Hariharan October 17, 2017
Opinions expressed by Entrepreneur contributors are their own.
You're reading Entrepreneur Middle East, an international franchise of Entrepreneur Media.

JPMorgan Chase’s CEO Jamie Dimon may have called it a “fraud” that is likely to blow out soon, but bitcoin -the splashy new digital currency in the global tech arena- shows no sign of going away. In fact, in a recent development that perhaps takes the digital currency mainstream in the UAE, British entrepreneurs Baroness Michelle Mone and Douglas Barrowman have launched a bitcoin-priced residential and commercial development in Dubai. Established as a joint venture between the two businesspersons, Aston Plaza and Residences (two luxury apartment towers and a shopping mall), a development valued at £250 million (US$325 million) to be located at Dubai Science Park, is offering an initial tranche of 150 apartments with an option to be bought in bitcoin (in addition to regular sales). At the time of writing, Aston Plaza’s website notes the starting price of these units offered as part of first phase as "23BTC" (roughly $130,000). BitPay, a platform that provides bitcoin payment tools to companies such as Microsoft and Richard Branson’s space venture Virgin Galactic, has signed up as a partner for processing the transactions, and says will be instrumental in enabling “back-end conversion from bitcoins to dollars.”

Shutterstock.com
Baroness Michelle Mone of Mayfair OBE. Image credit: Dan Keneddy.
“Crypto currencies like bitcoin have seen a huge surge in popularity and value in the last year, and many of the beneficiaries of this increase are looking for ways to diversify their investments, and lock in some of those gains,” says Mone, speaking about the project. “Our Dubai development is the pinnacle of design, architecture and commerciality, but my partner Doug Barrowman and I didn’t feel this was enough. We wanted to offer the property, tech and blockchain community a unique and exclusive opportunity by merging the property and tech sectors together in a true first for the industry. With Dubai [Expo] 2020 coming up, it is the perfect time and place to do this,” she adds. Douglas Barrowman, Chairman, Knox Group of Companies, said in a statement, “Bitcoin’s meteoric rise in a few short years means it’s now the world’s leading crypto currency. This is exactly why we are the first property development ever to be priced in bitcoin. I believe, as it gains mainstream adoption, many will follow our lead on this. I would, as I have done throughout my career in business, like to be the one who starts the trend, a very exciting one at that.”
Douglas Barrowman, Chairman, Knox Group of Companies. Image credit: Dan Keneddy.

Planning to offer the remaining units of the development too in bitcoin, depending on the demand once the initial tranche have been sold, Mone acknowledges that while the new-age currency may be a volatile one, the technology developments around it are not going anywhere, and it’s a market that can’t be ignored. And, if the idea of buying real estate in bitcoin interests you, it must be said that Aston Plaza has also attempted to make the entire process as easy as a click away, setting up a dedicated e-commerce portal www.astonplazacrypto.com, where you can directly buy the apartments using bitcoin, which will be then converted into US dollars, reducing risk.

“All apartment buyers will be vetted and submitted to traditional conveyancing [transfer of ownership] because while the front-end might be crypto, the back end is conventional conveyancing, done in complete compliance with Dubai law,” says Mone. Dubai’s regulatory authorities do not currently regulate any virtual currency products, and also consider them “high-risk,” as per a recent statement by Dubai Financial Services Authority. Mone agrees, and clarifies that that’s why “we'll need sight of passports, we'll need to know the individuals we're dealing with, and we will need the usual proof of funds that will ensure any dark-web money isn't coming through the system.” 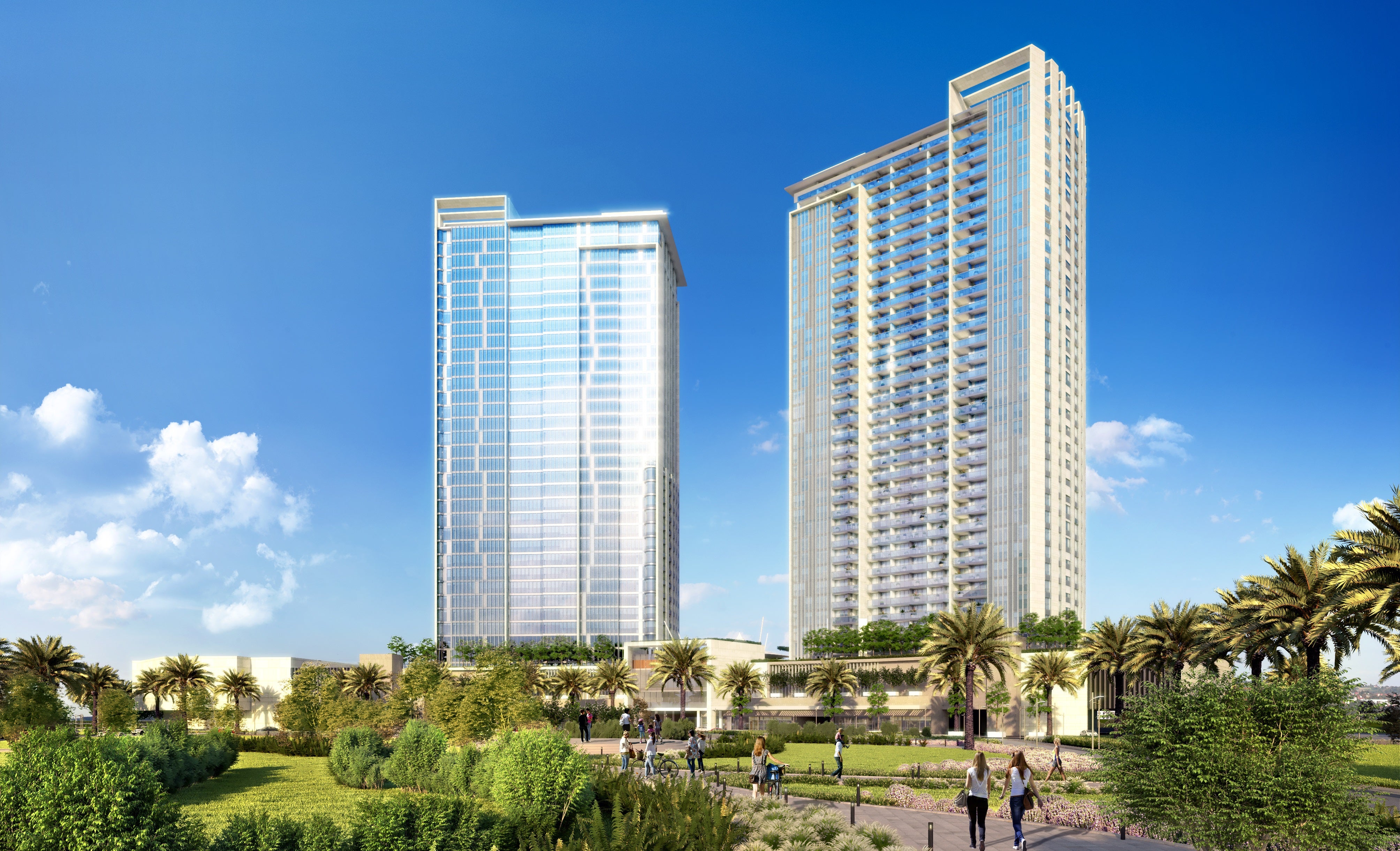 A rendering of Aston Plaza and Residences in Dubai. Image credit: Aston Plaza.

While the 1,133 studio, one- and two-bedroom condos are due for completion in September 2019, Mone didn’t reveal any details about the current state of sales for the project. According to a press statement, the units are all said to include floor-to-ceiling windows with views of the Dubai Hills, and the development also boasts of a Plaza- three floors dedicated to retail including boutiques, restaurants and a supermarket.

The Perfect Pairing With Fine Wine Is ... Crypto?