5 Ways To Think Bigger in 2018, According to Entrepreneur's Editor In Chief

Number one: Truth is the new year's competitive advantage!

By Jason Feifer December 21, 2017
Opinions expressed by Entrepreneur contributors are their own.

This list is from The Feifer Five, a monthly newsletter by Entrepreneur's editor in chief, Jason Feifer. Each month, he shares five entrepreurial insights to help you think bigger. Subscribe here.

Here’s the only prediction I can guarantee: Next year will bring new opportunities for sharp, forward-thinking entrepreneurs. And what exactly will those opportunities be?

For Entrepreneur's December issue, we asked tons of smart people to make a prediction. (Gary Vaynerchuk's answer, in part: “The same way I felt in 2008 about social media is how I feel about voice now.”) And as we did, I began forming my own prediction: Trust is next year’s competitive advantage.

Following a 2017 full of fake news, divisiveness, hacking, corporate malfeasance, and never-ending scandals, consumers want to embrace anything that is true and honest and decent and giving and real. The entrepreneurs who are most trustworthy -- who have nothing to hide, who speak openly and clearly, whose companies are transparent, who believe in their customers as much as they believe in themselves -- will be the ones that win people over. The future is for entrepreneurs to shape. Next year is a fresh opportunity to prove it. May we do so in the image of our best selves.

For evidence, look no further than this episode of my podcast Problem Solvers. It's about what happened when Noosa, the yogurt company, said yes to its first big retail opportunity -- and lost $100,000 because of it.

(Side note: After this episode ran, Noosa sent me a box with dozens of their yogurts. It's great stuff but, oh man, that's too much. I literally gave some away on the street outside our office, so they'd all be eaten before going bad.)

3. You may be making things unnecessarily hard.

Every so often, someone tells me something so simple and yet profound that I immediately know: This is something I'll think about for years, if not forever. And it happened recently, during a conversation I had with Tim Ferriss. He was telling me that the past year-plus has been the most productive time of his life. I asked: How? And he said: He started to look at every project and asked, "If this was simple, what would it look like?"

If this was simple, what would it look like?

In other words: Imagine what it would take to make this project easier. Imagine the structure. The other people you'd need to involve. The way you could delegate, spread, or re-organize the tasks. The stuff you can simply cut out of the process. And then... do that. Stop doing it the complicated way. Make it easy. Because the easier it is, the more you can accomplish.

4. If you anchor yourself to the old ways of doing things, time will just move on without you.

The year is 1777. Frederick the Great is ruling Prussia. Coffee was becoming popular there, so Frederick made the drink prohibitively expensive for people to buy. His explanation: "It is disgusting to notice the increase in the quantity of coffee used by my subjects, and the like amount of money that goes out of the country in consequence. My people must drink beer. His Majesty was brought up on beer, and so were his ancestors."

What Frederick didn't appreciate: Just because something happened in the past, that doesn't mean it must or even can continue in the same way. He died in 1786 and was succeeded by his nephew, Frederick William the II, who lifted the restrictions on coffee. People still love beer, of course. But they love coffee too. There's always room for something new.

(This all came from the latest episode of my podcast Pessimists Archive -- site, iTunes -- where I tell the story of how coffee survived 500 years of bans and health scares. Frederick is my absolute favorite moment from it. Though, I also loved diving into what 17th century coffee houses looked like in London. Hint: Not Starbucks!) 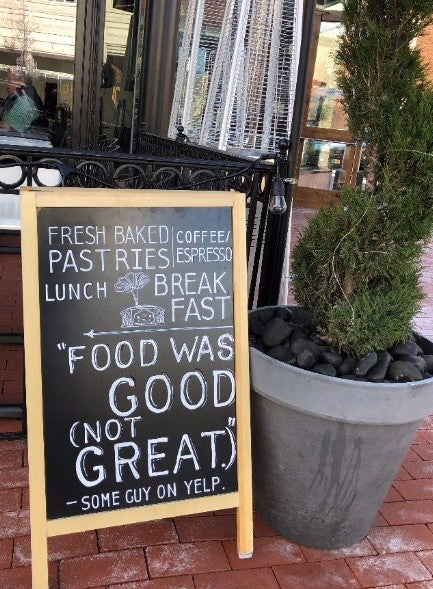 I loved this sandwich board, which I spotted outside of Emmerson in Boulder, Colorado in November. It's a great reminder that confidence trumps almost anything else. Someone insult your food? Use that to promote yourself, and suddenly you've flipped the insult on its head. It's like you're saying, Our food is so good, we can joke about it being bad. That's how confident we are you'll love it.