The Average Salaries of Tech Works in Major Cities (Infographic)

In 2017, most tech workers brought in a enviable yearly salary.

It’s pretty standard for people in tech to take home some big salaries. But just how much money are these people making? A recent study by Hired.com analyzed data from more than 69,000 job seekers and 10,000 companies, as well as surveying more than 700 tech workers, to uncover salary trends among tech workers in major cities around the world.

It’s no surprise that some of today’s highest-paid tech workers reside in the Bay Area -- home to companies including Facebook, Google and Apple. On average, a tech employee makes an annual salary of $142,000 in the Bay. However, workers in cities including Seattle, Los Angeles and New York aren't far behind. Seattle comes in second for highest-paid tech workers, with an average of $132,000 annually. Tech employees in the Big Apple and La La Land each take home an average $129,000 a year.

Thinking about moving to one of these cities? Before doing that, it’s important to take into account the typical standard of living costs in each of these places. While a $129,000 salary might sound like a dream-come-true, people in New York City are actually worse off than any others because of the high cost of living. In fact, after adjusting the salary with the average total cost of living in New York, researchers found that NYC techies are the worst off compared to people in other cities and that their average salary is still $6,000 lower than that of residents in the Bay Area. So, if you want to save money, take a look at Austin, Texas.

Austin is making its way onto the map in the tech world, with average salaries there increasing between 2016 and 2017 by 7 percent, with an average $118,000 in 2017. However, after taking into account living costs, the adjusted salary winds up being more like $202,000. “This means the average Austin tech worker would need an $84,000 raise to maintain their same standard of living in San Francisco,” the study explains.

Overall, the global average salary for tech workers in major cities is $135,000. And the tech industry that’s paying workers the most is transportation, which has an average $145,000 annual salary. Unfortunately, these numbers tend to plateau for people 45 and older. According to the research, the salaries of tech workers usually peak around $151,000 in their mid-forties, and decline to $150,000 or less for people 45 years old until retirement.

Related: Level-Up Your Salary With These 5 Simple Tips

For a closer look at the tech salary trends of major cities, check out the infographic below. 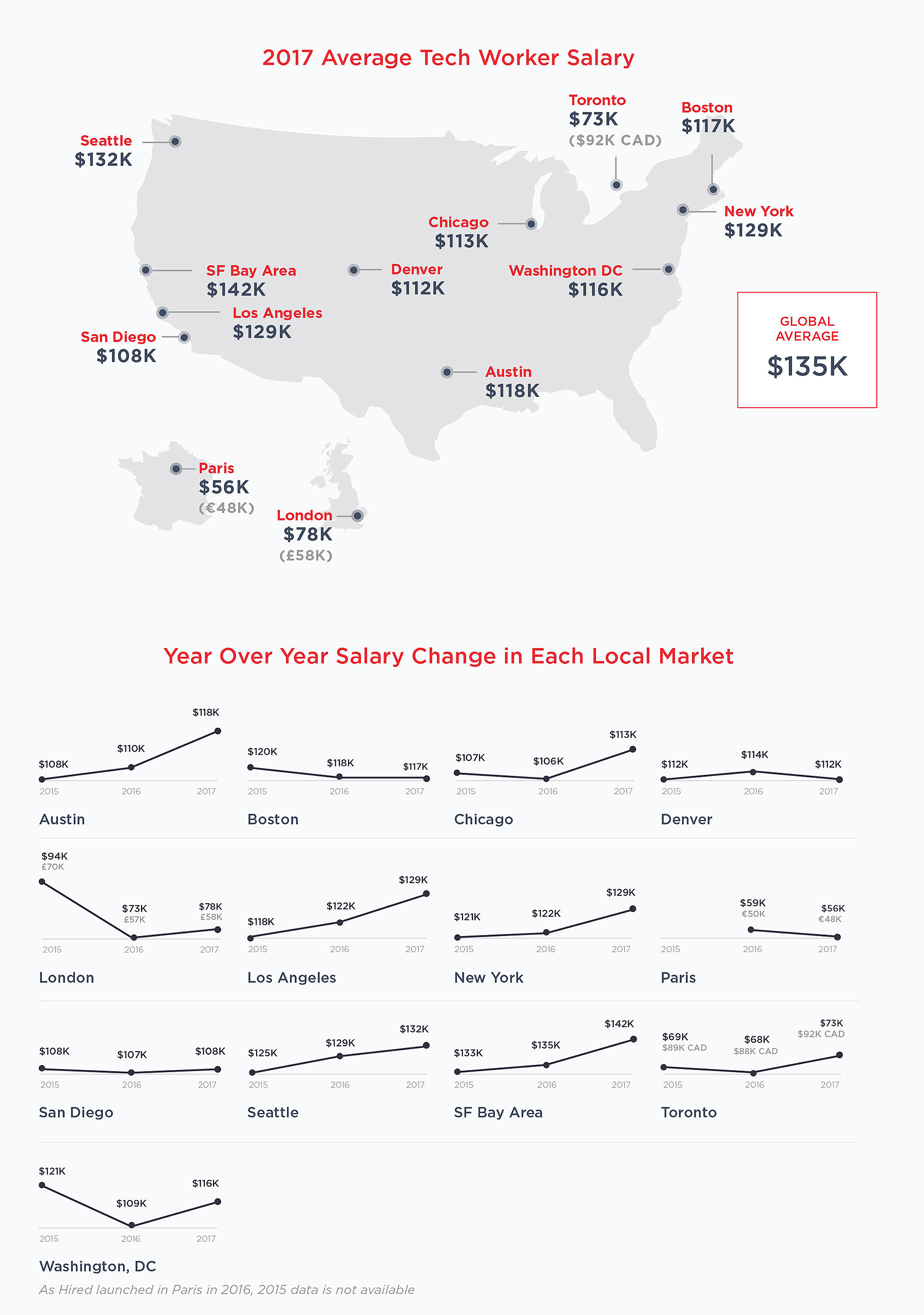