5 Ways to Stand Out From The Crowd, According to Entrepreneur's Editor-in-Chief

There's a lot of noise. Let's not be part of it.
Next Article

Welcome to this month's edition of The Feifer Five, Entrepreneur editor in chief Jason Feifer's monthly newsletter. (Sign up here!) This month it's all about standing out from the crowd -- or (surprise!) embracing the things you thought you needed to get away from. After all, entrepreneurism is about balance.

1. Rise above the noise.

“What are you totally over?” Someone asked me that at a party over the weekend. I had to think about it for a minute. Usually people ask me about what trends I’m seeing, or what amazing stories I’d recently heard. But what am I hearing too much of? What’s become noise? It’s an important question, as no entrepreneur wants to be noise.

So here are my first three. What are yours?

2. Sometimes the best leaders let someone else lead

The Golden State Warriors needed a change, and coach Steve Kerr realized it wasn't going to come from him. "They're tired of my voice," he said. "I'm tired of my voice." So during a recent game against the Suns, he handed over the clipboard and let his players coach themselves. The result: a 129-83 victory.

I love this leadership approach. Kerr isn't standing aside -- he's just showing his team that he trusts them. And they, in turn, step up to be worthy of that trust. It's a tactic we all should repeat, in ways large and small, with our own teams.

(Though of course, let's be honest: It sure helps when you're playing against a team as bad as the Suns.)

3. You have the power to surprise and delight

People often talk about how awful social media can be. But recently, an entrepreneur did something for me that was delightfully clever -- and, I think, an inspiration for us all to use social media in smart ways.

For the past few months, I've been doing weekly Instagram Live feeds through @Entrepreneur every Wednesday around 3 pm ET. But I quickly noticed a problem: People would keep tuning in throughout the video and asking, "Who are you? What are you talking about?"

At first, I just kept re-introducing myself. "For those that just joined," I'd say, "I'm Jason Feifer..." But that got annoying. So then I made a hand-printed sign -- but because a cell phone's selfie mode flips an image, I had to hand-print the sign backwards in order for it to read as forwards on the live feed. I'd just hold it up as I talked. Then I printed the sign, so it was easier to read. A few weeks in, someone suggested I tape it to my shirt so I don't have to hold it.

And that's when a guy from Success Print Shop in San Angelo, TX, reached out and asked if I'd like actual t-shirts with my backwards sign printed on them. I'd love that, I said. So he made five, and sent them to my office: 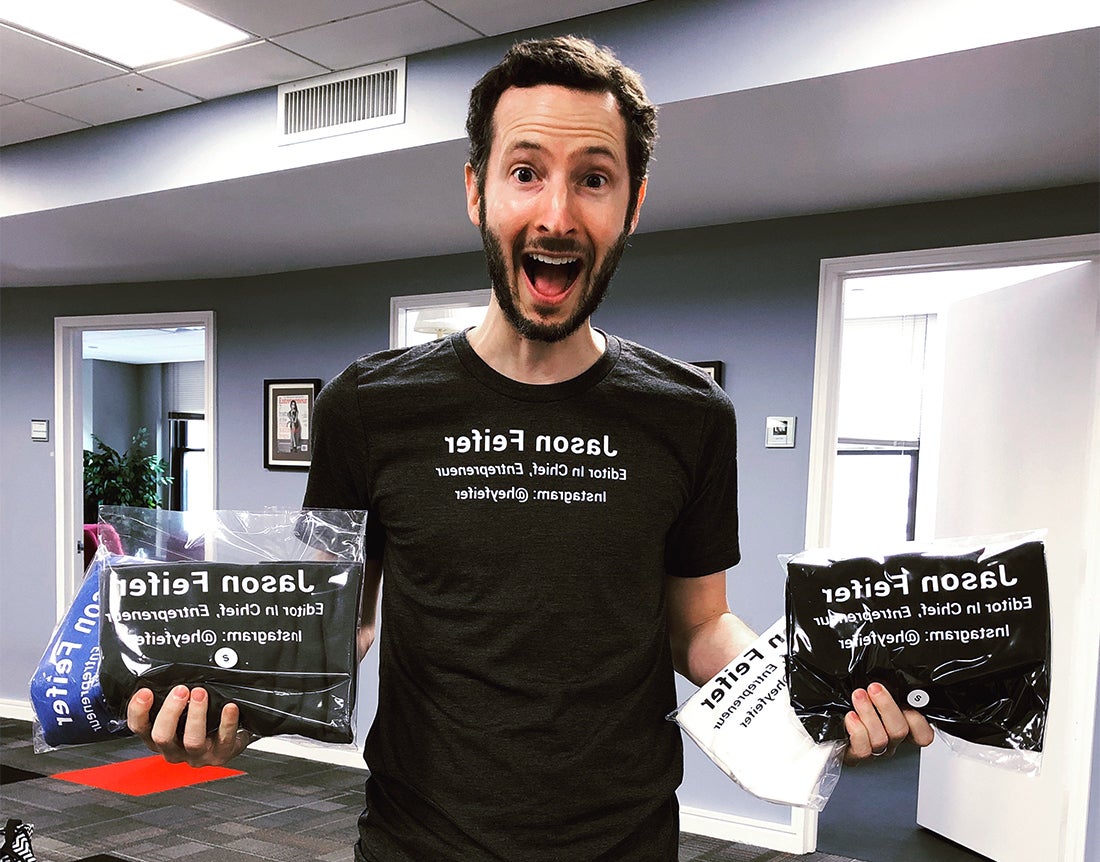 Image credit: Entrepreneur
I didn't ask for it. I wouldn't have thought of it on my own. But here's a guy with a t-shirt print shop, which means he was the perfect person to solve a problem I didn't even know I had. And ever since, I've given him shout-outs on Instagram for the shirts I now wear every week.

We can all do this -- use social media to surprise and delight people, and be the solutions to other people's problems. All we have to do is reach out.

Hamilton had a problem: His company, Crown & Caliber, had become a sprawling, dysfunctional mess. So he brought in a COO named Cullen, who began installing systems for everyone and every project at the company to follow. But that made Hamilton uncomfortable, and he feared that his scrappy startup was going to lose its soul.

I talked to these two for a recent episode of my podcast Problem Solvers, and I really loved this exchange about how Hamilton came to appreciate systems. So here it is, straight from the transcript:

HAMILTON: The reason why I was frustrated is not because of any one thing. It was because what I came to value, as a founder of a business, is speed and scrappiness and, you know—yes, what's the question? Go go go. And I felt like that was stopping in favor of process and systems and things that historically I've found to be terribly bureaucratic and the ultimate killer of startups. And so I think what in retrospect was happening is we were graduating from a startup, and no company can sustainably grow based on scrappiness alone. By definition, in order for it to be a business—and a scalable business—it had to have processes and systems. And I think I think it took me a while to see that this was not a threat to my long-term desire to grow the business, but it was integral to those desires.
CULLEN: And I think I think what Hamilton now gets, on the other side of this, is that having a process—an innovation process, and a clearinghouse for ideas—provides a tremendous amount of freedom. So when the organization wants to dream big or think of something new, [process] doesn't stop any of those ideas. Its just a place to have those conversations and a place to capture it and put it through a process.

Recently, I said no when a stranger asked me for help—and I explained why I was saying no. I shared the story on LinkedIn, and people there get VERY ANGRY!!!! and called me all sorts of names. But they clearly missed the point: Saying no is a form of helping, so long as you explain why you're doing it. To make that clear, I wrote this plea for more people to say "no, because." Please read it, and then do someone (and yourself) the favor of explaining a no.

Side-note: I said no because the person who reached out to me did nothing to connect with me. He was purely transactional, giving me no reason to engage with him over the many other people who reach out asking for my time. In contrast, check out this woman Page, whose resumes and cover letters just weren't getting any attention from employers. So she wrote and performed a song about her employability. It's genius. Nobody's paper resume could ever compare. Somebody, hire her!

And that's this month's The Feifer Five! Sign up here to catch next month's!

How to Grow Your Personal Brand for Long-Term Success

The Misunderstood Role of Personal Branding Within Organizations