How to Replace Your iPhone Battery

With about 30 minutes, $25 and a few tools, you can breathe new life into an aging iPhone.
Next Article Add to Queue


When it was discovered that Apple had been throttling CPU cycles on certain iPhone models to compensate for aging batteries, the company offered users a $29 battery replacement for iPhone 6 models or later. The deal, which represents a $50 savings, is available until the end of December 2018 and requires that you either bring your phone in to an authorized Apple repair center or send it in to Apple.

My iPhone 6 had become noticeably sluggish several months before this news broke. I couldn't make it through a full day on a single charge. So when I heard about the deal, I called Apple to make arrangements to have the battery replaced. To send the phone in for repairs, it would mean being without it for five or more days, which was out of the question. The other option, to bring the phone to an authorized repair center like an Apple store or a Best Buy, required making an appointment and leaving the phone there for the better part of a day while the battery was replaced. Not as painful.

I called the Apple store closest to where I live and was told there was a battery replacement backlog and to call back in two weeks. My local Best Buy was able to give me an appointment, but I had to wait one week and they couldn't guarantee that the job would be finished in one day. No go. I decided to replace the battery myself.

There are several companies that offer DIY iPhone repair/replacement options, but I had heard about iFixit from a friend who used it for an iPhone screen replacement. iFixit not only sells replacement batteries, screens and other components, but the tools you'll need to do the job right, and the company hosts a robust online community with teardown and repair guides, tips, tricks and videos submitted by users and staff.

The folks at iFixit sent me a $24.99 iPhone 6 battery replacement kit, which includes a replacement battery and a tool kit. The lithium-ion polymer battery shares the same specs as the original cell (3.8 volt, 1,810mAh, 6.91Wh) and is pretested to ensure that there are no charging cycles and that charging capacity is 95 percent or higher. 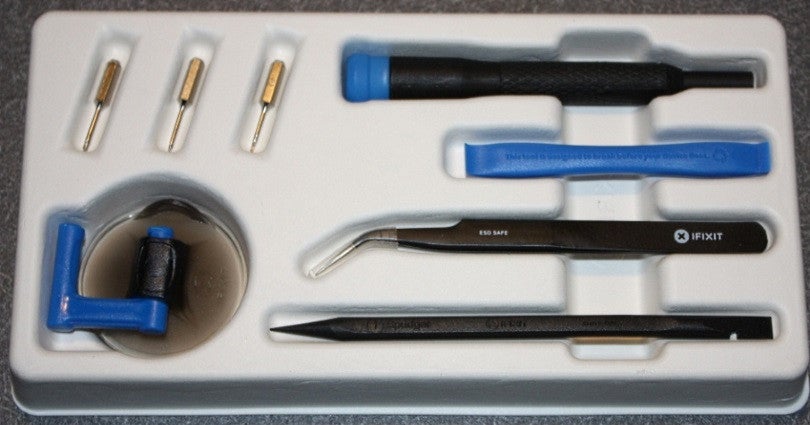 The toolkit contains a suction cup and a plastic opening tool that helps you to pry open the phone without damaging interior components or dinging the exterior casing. It also comes with a screwdriver base with three tiny bits, including a Pentalobe bit used to remove the two screws at the base of the phone; a spudger, which is a pointy tool used to help connect and disconnect the small ribbon cables; angled tweezers; adhesive strips; and a Liberation kit, which is nothing more than two Philips head screws that you can use to replace the Pentalobe screws. I also received a couple of optional tools to try out; the iOpener ($19.99) and the iSclack ($24.99).

The iOpener is a 12-inch long, 2-inch wide black fabric-covered bag filled with liquid that you heat up in a microwave for 30 seconds and place on the back of the phone to loosen up the adhesive that holds the battery in place. You can also use a hair dryer for this. The iSclack can be used in place of the suction cup that comes with the toolkit: It's a tool with two suction cups (front and back) that makes it easy to open the phone without having to use any other tools to pry the two pieces apart.

First, a word of caution

A word of warning before getting started: The screws that you have to remove on the iPhone 6 (and other iPhone models) are very small, as are the ribbon cables that have to be disconnected and reconnected in order to do the repair. The job isn't overly difficult, but it requires a steady hand, good eyesight and a lot of patience.

It's also important to keep track of the screws you've removed and not mix them up, otherwise you run the risk of damaging the circuit board when you go to replace them (I used labeled shot glasses to separate the screws and keep them safe). You'll need something solid to prop up the top of the phone when you first open it to avoid damaging the display cables: I used an Amazon Echo, but a can of soda or something similarly heavy will do.

To start, I let the battery run down to around 25 percent and powered down the phone. I heated up the iOpener and let it sit on the back of the phone for five minutes or so. Next, I cleaned the front and back of the phone with a microfiber cloth and removed the two Pentalobe screws at the base (on either side of the power jack). 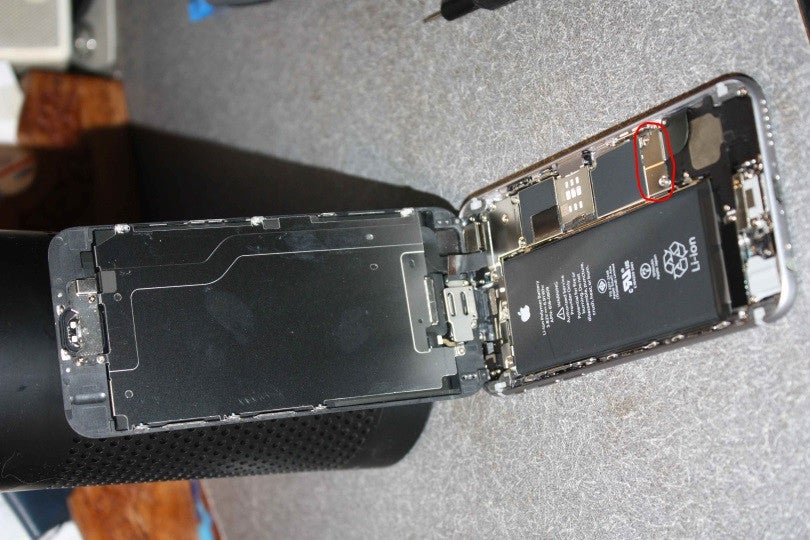 At this point you can proceed to the next steps, which require that you remove the five screws that hold the front panel cable plate in place and disconnect the display cable, the digitizer cable, the home button cable and the camera/sensor cable (highlighted below). These actions allow you to completely remove the top part of the phone to give you more room to work on the battery, and although this is recommended by iFixit, it is not mandatory as you can remove the battery without completely removing the top. If you choose to leave the top attached, take care not to twist it or inadvertently damage one of the above-mentioned cables trying to remove the battery, which is held in place by very strong (and stubborn) adhesive strips. If you do remove the top, be extra careful when removing the cables and make sure to keep the screws separated as they are not interchangeable. 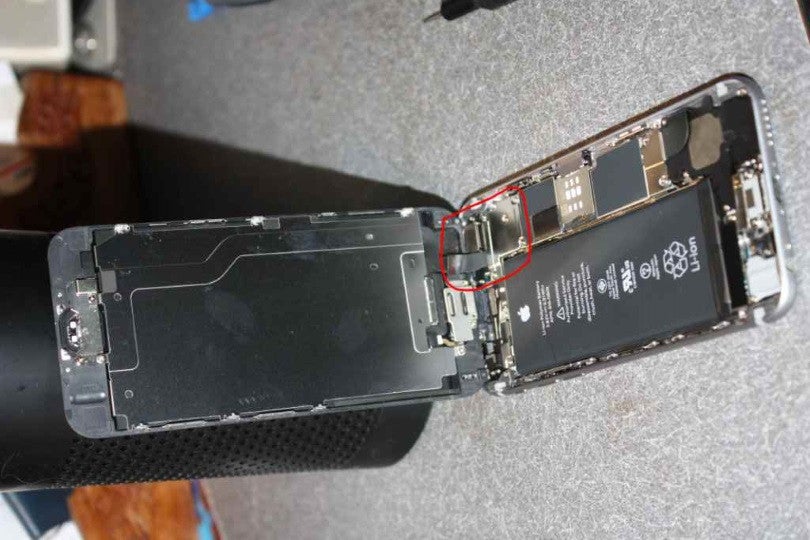 There are two black tabs on the bottom edge of the battery. I used the tweezer to grab one and peeled it back. Using my thumb and forefinger, I slowly pulled the tab straight out toward me while keeping it parallel to the desktop surface. As I pulled, the adhesive (attached to the tab) began to pull out like taffy. The strip stretches to many times its original length, so it's important to keep light but steady pressure while pulling and to continue to grab the adhesive closer to the battery as you pull. If the adhesive strip snaps, you can try to grab a piece of it with the tweezers and continue to pull, but if you can't get hold of it you'll have to use either a piece of dental floss (or strong thin string) or a credit card to separate the battery from the bottom of the casing. 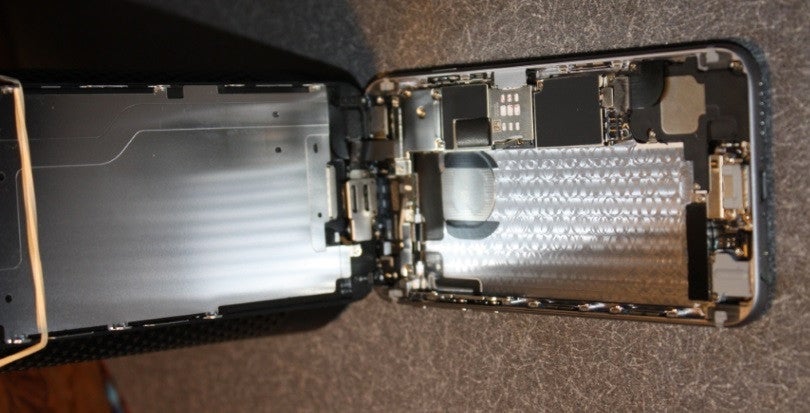 If you haven't removed the top of the phone you'll have to do so now to give yourself room to maneuver the string or card. It's a good idea to reapply heat to the outside of the case using the iOpener or a hair dryer to loosen up the adhesive. Again, take care not to damage interior components such as the volume controls or the circuit board by applying too much pressure with the card. Also, be careful not to puncture the battery as it may release harmful chemicals or catch fire.

Fortunately, I was able to remove both strips without snapping either of them and lifted the battery out with ease. If you have to pry out the old battery, check to make sure there's no residual adhesive stuck to the bottom of the phone housing. I followed the instructions to attach two new adhesive strips to the bottom of the new battery, which is fairly easy. Just make sure they go on evenly without bunching up. If you experience a problem and have to discard the adhesive, call iFixit for a new set of strips. 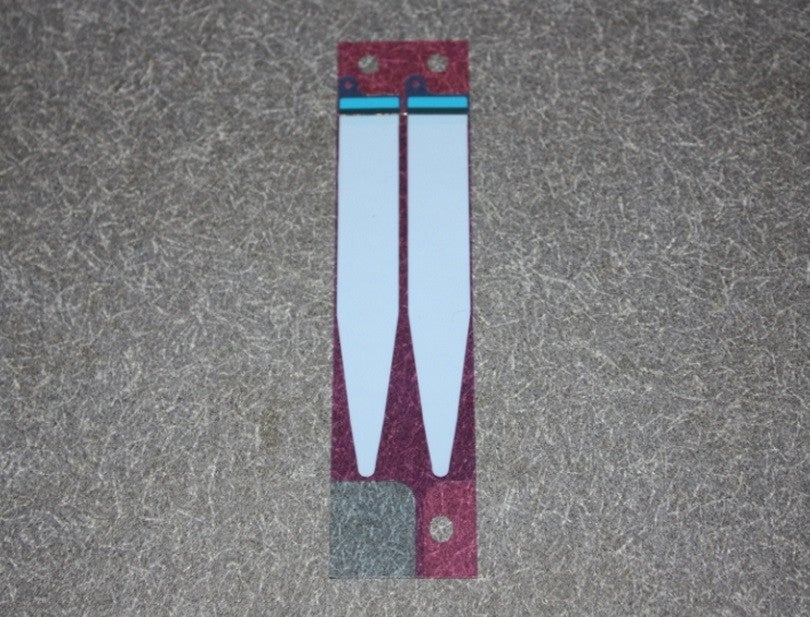 I angled the battery into place without pressing it down and used my fingernail to attach the cable connector to the socket on the circuit board. This part was tricky as I had to keep the battery at a certain angle in order to align the connector with the socket. It took several tries before I was able to press it in without inadvertently pulling it out by slightly moving the battery the wrong way.

Once connected, I laid the battery down and firmly pressed it into place. If you had to remove the top, now's the time to carefully reconnect the various cables, but it's a good idea to disconnect the battery cable again before doing so. This way, if you happen to press the power button by accident (which I did), the phone won't power up while you're reconnecting the cables.

Once all of the cables have been reconnected and the protective plate has been screwed into place, reconnect the battery cable and attach the battery connector plate. Carefully place the top portion of the phone onto the bottom portion, and slide it into the slots at the top until both pieces are flush along the top edge. Gently press the sides and bottom until they click into place, and replace the Pentalobe screws (or use the Liberation kit screws) by the power connector to complete the job. iFixit recommends calibrating the new battery by letting it drain below 10 percent before giving it a complete uninterrupted charge.

A like-new iPhone (and a sense of accomplishment)

I was able to complete the battery replacement in just under 30 minutes. The only part of the process that gave me any trouble was reconnecting the battery cable, but that was a minor hiccup. The best part? My iPhone 6 performs like brand new. Apps open immediately, videos load quickly and I still have more than half of my battery left at the end of a busy day.

Of course, this process isn't for everyone. If you have major reservations, leave it to the professionals, or invest in a battery case, a power bank, or, gasp, a new phone.

iPhone 11 Is All About That Square Camera Bump

Bigger Isn't Always Better, But With the iPhone X, It Is