Let's get Familiar with : Internet of Things (IoT)

By Yash Mehta June 20, 2018
Opinions expressed by Entrepreneur contributors are their own.
You're reading Entrepreneur India, an international franchise of Entrepreneur Media.

The Internet of Things (IoT) is a generic recognized trend that is gaining vogue with time. IoT is transforming many industries, including healthcare, transportation, utilities and many more, thereby, driving them to raised levels. With exponential growth in the internet usage, the upcoming advancements in technology are ‘Internet of Things’. The IoT will have a huge impact on our lives in the coming five years, as people and businesses are now transferring towards IoT. Some technology experts call it the ‘Next Digital Revolution’ while others proclaim it to be the ‘Next Generation of Internet’. Undoubtedly, the future with IoT is brighter, and the market too agrees with the same. It is making our lives more efficient and easier.

Is migrating towards IoT worthwhile?

The spending on IoT, by industries like manufacturing, transportation and logistics, healthcare, retail, government, utilities, energy and natural resources, insurance, for the year 2015 was $10 billion and is likely to reach $40 billion in 2020. 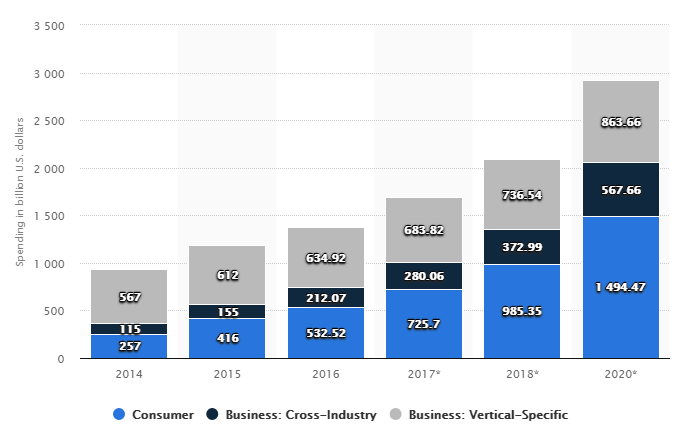 As seen in the above infographic by Statista, consumer spending on IoT will touch a whopping mark of $1.5 trillion in 2020. In the year 2012, the market adoption of IoT was as low as 8.7 billion devices, it shot up to 20 billion devices in 2017. According to NASSCOM, global IoT revenue is expected to grow from $0.9 trillion in 2014 to $3 trillion in 2020. Indeed, startups are playing the biggest role in enabling IoT services in the consumer as well as the industrial segment.  So the time has already arrived, wherein IoT is proving its worth.

IoT is a blend of hardware, software and elements that include cloud infrastructure, data analytics, edge device hardware with embedded software, which are mandatory to any business that needs to adopt IoT. IoT applications will optimize, innovate and transform consumer products as well as business processes. Unsurprisingly, the adopters require countless technical personnel, as it is highly unlikely for a business to have a single developer, possessing all technical skills. Also, the cost of hiring groups of technicians is unattainable. There are a number of complexities involved for developers and businesses alike.

For developers, elements like hardware sensors, middleware and gateways must be linked to have a connection, and businesses that want to develop IoT solutions are constantly looking for developers with skills in machine learning, AI, design for data, automation, IP networking and hardware interfacing.

Therefore, it becomes very challenging for the companies to adopt IoT. The executives believe that IoT skill gap is preventing businesses from being able to exploit new capabilities. The study, “The Impact of Connectedness on Competitiveness”, was based on a global survey of 350 executives from renowned global enterprises such as Airbus, Balfour Beatty, Philips Lighting, GE, Whirlpool and Hitachi, and concluded that almost one-third (31%) of the executives said that their organization faces a ‘major skill gap’ for IoT readiness, while only 7% had most of the skills in place.

Is this the reason why potential adopters are not integrating IoT technology into the business? The real question is how will the companies undertake IoT projects in that scenario? Since there is no clear panacea for skill gap ills, smart contract platforms are aiding the industries in a way for IoT development. They are computer programs that can automatically execute an agreement based on programmed logic. Stellar, Techracers and Hurify are few smart contract platforms which assist the industries to undergo projects and secure their data in the decentralized registry. Stellar is a common financial platform that is designed to be open and accessible to everyone. It is a decentralized network where anyone can run a Stellar node code, validate the transaction and are executed only when certain constraints like batching and multisignature are accepted by all the members involved. Techracers provides a private blockchain application that helps industries like healthcare in reducing their infrastructural cost and operational cost to a great extent. They deliver customized solutions to businesses in a timely manner and offer solutions in smart contracts based on Ethereum. Whereas, Hurify is also based on Ethereum which aims at filling the gap between the demand and supply of IoT space. By providing an IoT-specific marketplace, they connect the companies which require variety of services from numerous skilled IT workers throughout the lifecycle of an IoT project. This ensures reliable and accurate services from a pool of experts engaged by these platforms.

As IoT has proved its worth and has an even greater scope in the coming future, companies are now trying to inject IoT into their industries by collaborating with other companies. The information generated by IoT can lead to design changes that differentiate businesses and products in market place. For this very reason, Dell and Intel collaborated to create the Dell IoT lab. Companies are trying to fill the skill gap for IoT development by collaborating with other leading companies. However, the companies which need to drive IoT into their industries can now heave a sigh of relief, as aforementioned platforms provide them with a convenient solution.

End of the Line

IoT has been set to become one of the essential strengths of every business sector by 2020, as established by various industry experts and analysts. The shift towards IoT will result in improved and efficient businesses. Use of IoT enabled devices, will make enterprises adopt better technology in their businesses and upgrade their business processes. This would turn out to be an opportunity for better efficiency and quality man-hours. Embracing IoT technology in forthcoming years will become the need of hour. Thus, it has now become vital for industries to get skilled developers. Therefore, the industries are now finding various alternatives that enable them to flourish in the market.

More About Internet of Things

7 Ways to Make Your Office Smart

This Company is Changing the Way Portable Devices Use Power

Don't Be Afraid To Walk a Lonely Path To Success

Hospals Raises $3.5 Million In Pre-Series A