Why oBikes Bid Adieu to its Home Base Singapore?

The stationless bicycle sharing startup oBike today said goodbye to its home base country Singapore citing the reason of new regulations imposed by the Land Transport Authority (LTA) in country.

Launched in January 2017, Singapore based oBike revealed in its Facebook post that the company will cease its operation immediately from June 25.

“oBike is announcing its decision to cease operation in Singapore as a result of difficulties foreseen to be experienced to fulfill the new requirements and guidelines released by Land Transport Authority (LTA) towards dock-less bicycle sharing in Singapore," the company said.

"oBike strongly believes and is committed to provide dock-less bicycle sharing service that would benefit users commuting and Singapore's transportation system, however it is with regret that the new regulation measures do not favour this belief of ours." 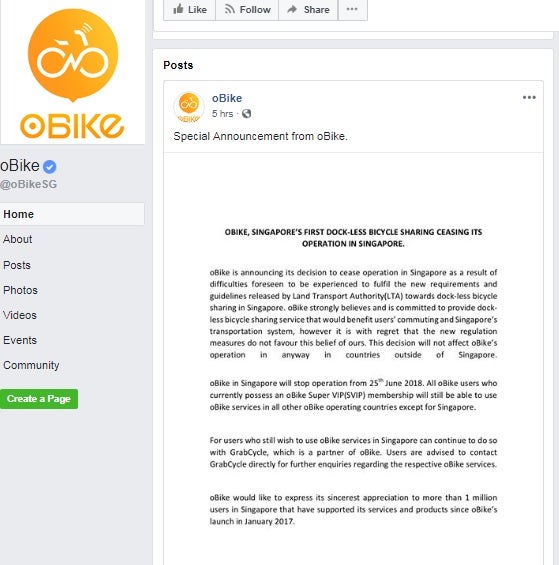 oBike is the second bicycle-sharing company that has gone against of the new licensing laws in Singapore. Earlier this month, FintechSG’s firm GBikes had also announced to pull out its operations from Singaporean market.

Ejection of oBikes from GrabCycle

While the other competitors like Ofo, MoBike and homegrown brand SG Bikes seem to have no problem in adhering to new regulations imposed by LTA, oBike and GBike have announced their exit in the Singaporean market for now.  However, oBike in its Facebook post has said that the users who currently possess an oBike Super VIP membership can continue to use its services via GrabCycle.

The marketplace app on the other hand, had announced on its app that the partnership with oBikes no longer exists.

Below mentioned screenshot is the preview of an oBike account holder: 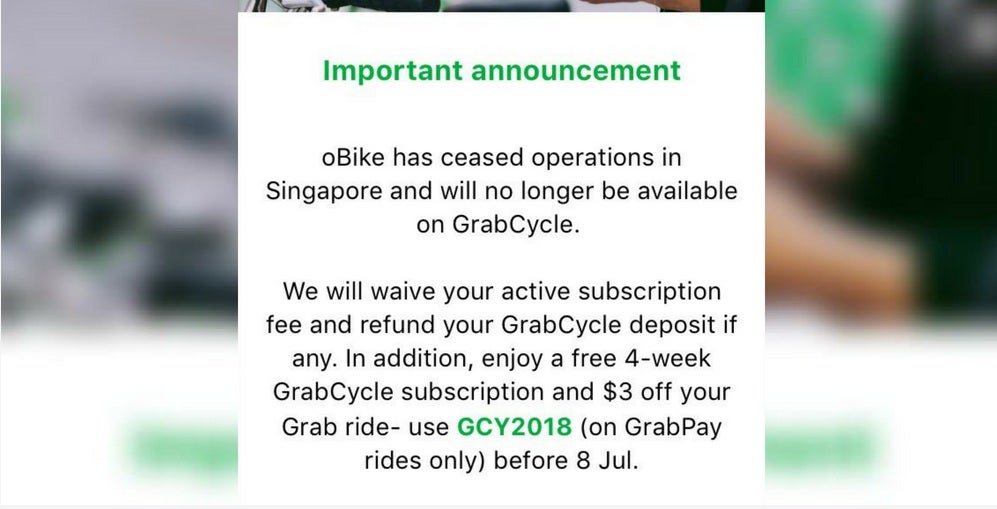 The news of the sudden issues between oBike and GrabCycle has created problems for the customers as both the companies shared the same customers. Users are worried about their deposits as they don’t know which company is going to pay them back. As per the news reports, the users couldn’t unlock the bicycles parked on pavements, parks and bus stops all over the country.

To remove the thousands of abandoned bicycles, LTA has said that the authorities will include oBikes on their removal plans, including the removal of shared bicycles from the public places.

Amid the stiff competition in the Singaporean bicycle-sharing market, oBikes is known for its best use for short journeys amongst users. The company is also present in several other countries that includes Taiwan, Korea, Thailand, Malaysia, Hong Kong, Australia, Netherlands, Spain, Switzerland, United Kingdom, Germany, Austria, Sweden, Italy and France.